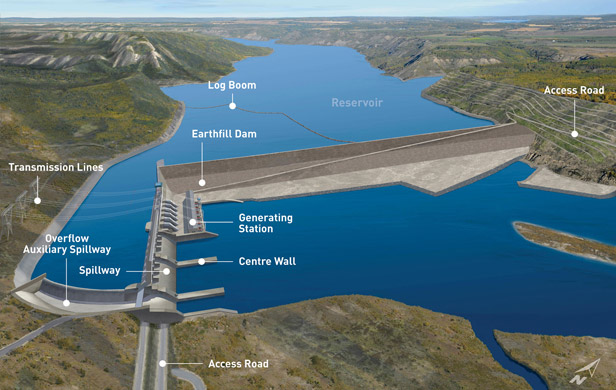 Public hearings into the controversial, $8 Billion Site C Dam are set to commence next month, as the Joint Review Panel for the project indicated today that proponent BC Hydro has filled in some key gaps identified in its proposal.

The process will kick off on December 9 in Fort St. John and is scheduled to wrap up by the end of January, with a final recommendation on the project expected mid-year.

BC Hydro maintains the need for the project is strong – a contention that has been challenged repeatedly in these pages.

“The need for the project is there certainly in the long term, it’s long-term planning. It, in fact, may be needed sooner, particularly from a capacity perspective,” Hydro spokesperson Dave Conway told media, citing a growth in demand to supply liquefied natural gas (LNG), mining and other industrial sectors.

Conway also referenced anticipated growth in population and use of electronic devices in defence of the need for a new dam.

But there are some serious holes in Hydro’s story.

First off, despite considerable growth in population and electronic devices over the past decade, BC’s electrical consumption has remained pretty well flat. According to Stats BC, the province was a net exporter of 5,800 Gigawatt hours (GWhrs) of power last year – an excess of more than 10% of our actual demand. That figure is trending upward, as BC is awash in private power, while at the same time doing well with conservation.

Hydro predicted a growth in demand of 40% over the next two decades in its recent draft Integrated Resource Plan, but the utility has a long history of overestimating power needs, as independent economist Erik Andersen has detailed in The Common Sense Canadian.

Thirty years ago, when Site C was first proposed, British Columbians were threatened with brown-outs if the dam wasn’t constructed. Needless to say, this scary scenario never came close to materializing.

That said, the idea of powering the enormously energy-intensive, proposed LNG industry does introduce massive new electrical demands for the province. But this notion is fraught with a litany of problems, such as:

Local First Nations, environmental groups and landowners are supported by organizations beyond the region too, such as the Vancouver-based Wilderness Committee.

[quote]There’s 100 kilometres of river valley — a huge amount of farmland — that would be flooded. I don’t know if the people in the south have locked on that yet. While that river is still running, we’ve got some fight in us.[/quote]

Site C is often justified in terms of powering 450,000 homes, which is an unfair characterization, since BC looks to be a net exporter of power for years to come. When the government or crown corporation acknowledges that Site C is really about powering industry, at least they’re being more honest with the public. But in a day and age when we produce just 40% of our own food in BC, when power bills are going through the roof, when we’re running sizeable deficits and racking up debt for future generations, the question is this:

[quote]Should taxpayers shell out billions to destroy a massive amount of quality agricultural and forest land – all to provide highy-subsidized power to the oil and gas industry?[/quote]

This is the question that needs to be front and centre at these public hearings beginning next month.

The Joint Review Panel is currently accepting applications to speak at the hearings.