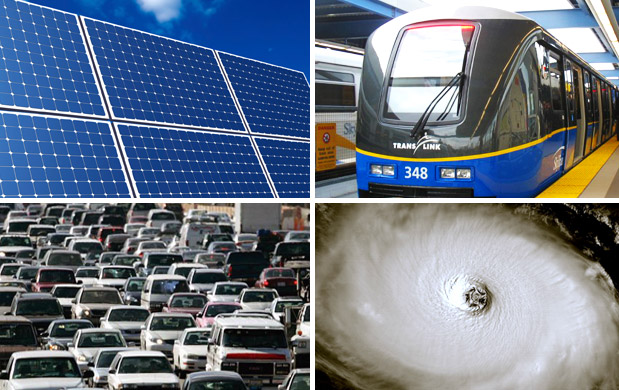 Choices are one of the many benefits provided by our modern, affluent, consumer culture. A television universe of 500 channels should provide something for everyone’s viewing preferences. Toothpaste? More different kinds than can be imagined. Breakfast cereal? The varieties are overwhelming. Cars? A model with specifications for every possible need. Don’t like the long cold seasons? Just choose a warmer place for a winter holiday.

Such choices are more than comforting. Beyond lightening the burden of inconvenience, reducing the stress of adapting, and creating the illusion of security, our choices come with a satisfying sense of control and plentitude. And now, thanks to the wonders of technology, we can even chose our climate.

Yes, just like adjusting a thermostat, turn to the desired temperature, wait patiently for the greenhouse gases to take effect, and that’s the climate we’ll get. Furthermore, the science is so accurate that it even offers a range. This is why the October 2013 report of the Intergovernmental Panel on Climate Change provided choices between 0.3°C and 4.8°C by 2100. It all depends on what we want.

The IPCC does regret the rather slow response but that’s the best they can do given the complexity of climate dynamics and the geophysical inertia to be overcome. But they have done their best. And now, in collaboration with the thoughtful people at NewScientist (Catherine Brahic, Oct. 5/13) and the expertise of Dr. Richard Moss of the Pacific Northwest National Laboratory in Richland, Wash., we are provided with four — not two or three but four — distinct and easily identified climate options for 2100.

Option One: The quick response

A heavy investment in renewable energies and R&D, with some geo-engineering and considerable political resolve to wean ourselves off fossil fuels, has held atmospheric carbon dioxide levels at 400 ppm — they are now falling due to new sequestration technologies. Billions of trees have been planted, forests revived, meat consumption reduced, and the world’s population stabilized at 9 billion. Arctic sea ice has stopped melting, Antarctica has stabilized and ocean acidification has slowed. Sea level rise has been limited to 0.26 – 0.55 metres. Temperature increases have been held to 0.3 – 1.7°C.

A slow response in transitioning to renewable energies and implementing climate treaties are having measurable effects. Increasing efficiencies and the widespread use of natural gas, together with nuclear power and other green technologies have stabilized carbon dioxide levels at 550 ppm. Less pastureland, more compact cities, better mass transit and a general endorsement of a low-carbon economy have slowed the rate of climate change. Sea level rise is between 0.32 – 0.63 metres. Global temperature rise is 1.1 – 2.6°C.

Option Three: Too little, too late

Fossil fuel use continued unabated until late in the 21st century, then dropped to 75 percent of energy consumption in the last few decades — not much less than the 82 percent in 2011. Lifestyle changes were largely unaltered until extreme weather events prompted panicking governments to institute unambitious controls on inefficiencies, greenhouse gas emissions and even travel. Atmospheric carbon dioxide is at 650 ppm. The global population is 9.5 billion, oceans continue to acidify, sea level rise is 0.33 – 0.63 metres. The temperature increase is 1.4 – 3.1°C.

Fossil fuels still energize a booming economy that is structurally similar to 2014. The global population of 12.5 billion is proud of its consumer and high-tech identity. With carbon dioxide levels at 950 ppm, human health is suffering, food production is faltering, water shortages are acute, and biodiversity crashes are threatening essential “ecosystem services”. Extreme droughts and floods are creating widespread political instability.

Tropical diseases and pests have become common in northern latitudes. Ocean acidification is severe with primary marine ecologies in jeopardy. The Arctic has not had summer ice for decades. Melting has accelerated in glaciers, Greenland and Western Antarctica. Sea level rise of 0.45 – 0.82 metres is displacing cities, settlements and agriculture in coastal regions. Because the temperature increase of 2.6 – 4.8°C is registered as an average, some places have become too seasonally hot for human habitation.

These options for 2100 will be the consequences of our choices, the ones we make in the succession of moments that constitute the unfolding importance of the present — a particularly special present because it is pivotal in the history of humanity and our planet. We obviously have some crucial choices to make — or to not make.

The choice of Canada’s federal government is to develop Alberta’s tar sand and make BC’s West Coast an export terminus for its bitumen. Several pipelines are being planned: the Norther Gateway from the tar sands to Kitimat; the Kinder-Morgan Trans Mountain from Calgary to Burnaby; David Black’s proposed refinery at Kitimat would require at least two more pipelines, one for dilbit and another for natural gas; and the proposed LNG plants for northern BC ports would require more gas pipelines.

Meanwhile, the BC government continues to encourage the mining and export of provincial coal, while using its southern ports as conduits for the offshore shipment of American coal. Such choices will determine the future choices we have — or do not have.

We cannot be faulted for the unpredictable consequences of our choices — this is why we excuse children for their innocence of cause and effect. But fully functioning adults, those who know, or should have known, or could have known, are not excused from responsibility for their choices. Intentional denial and willful blindness are not defences in law, are dubious excuses in morality, and are harshly judged in history.

This is the sobering side of our modern, affluent, consumer culture. Because its information density educates us in unprecedented ways, many of the choices we now make carry a weight that can no longer be excused by innocence or ignorance. Sophisticated climate science is able to accurately describe the inescapable consequences of our choices. Of the four options suggested, which one would you choose?