A new report from geoscientist and shale gas expert David Hughes offers a big reality check for BC’s proposed liquefied natural gas (LNG) industry. As a former 32-year veteran of the Geological Survey of Canada, Hughes led a national review of the country’s unconventional  gas potential. Now, after drilling down on the BC Liberal government’s LNG vision, he has some sobering things to say about its promise of a $100 Billion windfall “prosperity fund”, built on accessing new markets in Asia.

In a new report titled BC LNG: A Reality Check – released by the Watershed Sentinel on January 18, where you can read it in full – Hughes analyzes the implications of 7 large LNG export licences recently issued by the National Energy Board. Together, they constitute a staggering 14.6 billion cubic feet/day (bcf/d) of gas – more than the total amount of gas coming out of the entire country today, at 12.7 bcf/d.

Drawing on the best available production and geological data from Canada’s gas sector, Hughes assails both the NEB’s reckless approval of this much gas for export and the BC Liberal policy for economic development that is driving the LNG boom.

“The NEB appears to have violated its mandate to ensure Canadian energy security by approving seven LNG export applications, which add up to more than the current gas production of all of Canada, and far exceed even its most optimistic projections of BC gas production, says Hughes.”

[quote]To put this in perspective, the US, which produces five times as much gas as Canada, has approved only four export projects with a total capacity of less than half that of the NEB approvals.[/quote]

Hughes found that, on average, production from a given unconventional gas well in BC plummets by 69% in its first three years – a far sharper decline than the historical rate for conventional gas, meaning that a drilling treadmill is required just to keep production flat, let alone grow it.

To that latter point, Hughes paints a startling picture of what fulfilling these export demands would look like on the ground: i.e. a dramatic increase in controversial fracking and consequent water use.

The most recent approval by the NEB of 4 export licences, just before Christmas, came in the same week the regulator received Kinder Morgan’s application for a major oil pipeline expansion to Vancouver and announced its conditional recommendation of the proposed Enbridge pipeline. The LNG story was thus lost in the shuffle – this despite the fact, as The Common Sense Canadian noted at the time, those four gas licenses alone were the equivalent of almost 2 million barrels of oil per day for 25 years.  In other words, roughly four times bigger than the proposed Enbridge pipeline and the same size of the entire Alberta Tar Sands oil output today.

Add in the three licences it had already approved before that, plus the the 4 more it still has under review – totalling an additional 3.4 bcf/d – and you have double the energy equivalent of today’s Tar Sands.

[quote]…meeting the NEB export approvals would require drilling nearly 50,000 new wells in the next 27 years (double the approximately 25,000 wells drilled in BC since the 1950s).[/quote]

After extensively researching wellhead data across the US shale gas boom – which is a few years ahead of Canada since it was the birthplace of modern high-volume slick water hydraulic fracturing – Hughes came to the conclusion that shale gas wells don’t produce for nearly as long as conventional gas wells did. In fact, the average 3-year decline rate (the speed at which production falls toward zero) of the 5 major US shale gas plays – accounting for 80% of the nation’s production – was a staggering 84%. That means that most wells are pretty much tapped out in a few years. It also means continual high rates of drilling are required to offset declines – just to maintain, let alone grow, production.

Hughes’ work in the US has done a great deal to shake up the debate in energy and financial sectors around the longterm financial and geological viability of shale gas.

Fracking would use more water than City of Calgary

Turning his attention to Canada over the past year, Hughes is seeing similar trends. “Given the steep production declines associated with shale and tight-gas, drilling rates of more than 3,000 new wells per year would be required to ramp up production to required export levels, followed by nearly 2000 wells per year to maintain production,” he warns. (emphasis added)

[quote]Notwithstanding the other well publicized environmental issues with hydraulic fracturing (fracking), which would be the principal completion technology used to produce this gas, water consumption alone during the ramp up phase would exceed that of the City of Calgary, which has more than a million people.[/quote]

To Hughes though, it’s much more than a matter of underestimating the environmental costs. The NEB and provincial government are misrepresenting the geology too. The regulator’s numbers simply don’t add up, says Hughes, when it comes to supplying the gas for the export licences they’ve issued.  “The NEB’s forecasts of gas production in BC through 2035 do not come close to the levels needed for its LNG export approvals,” he notes. “Its reference case forecast for BC is the production of 57 trillion cubic feet (tcf) by 2035, yet 120 tcf are required to meet its approvals (more than three times BC gas reserves).”

Hughes has also tackled the erroneous boasts being made by BC’s Minister for Natural Gas Development, Rich “The Optimist” Coleman. Although more exploration will certainly find additional recoverable reserves, Coleman recently declared that there are over 950 trillion cubic feet (tcf) of recoverable resources in BC alone – this compares to the recent NEB estimate of 861 tcf in Manitoba, Saskatchewan, Alberta and BC combined. The most recent estimates of marketable gas reserves in BC by Coleman’s own Oil and Gas Commision is only 33.4 tcf.

To put this in perspective, just 25 tcf of marketable gas has been recovered in BC since the 1950s from more than 25,000 wells. Nearly five times this amount would need to be recovered in just 27 years to meet the NEB’s export approvals.

Could Canadians run out of gas due to export commitments?

At issue is Canadians’ own future energy security. A central piece of the NEB’s mandate is to ensure that exports run surplus to domestic needs. And they’ve given their stamp of approval to these LNG export licences:

[quote]We have determined that the quantity of gas proposed to be exported by Prince Rupert LNG is surplus to Canadian need. The Board is satisfied that the gas resource base in Canada, as well as North America, is large and can accommodate reasonably foreseeable Canadian demand, the LNG exports proposed in this Application, and a plausible potential increase in demand.[/quote] 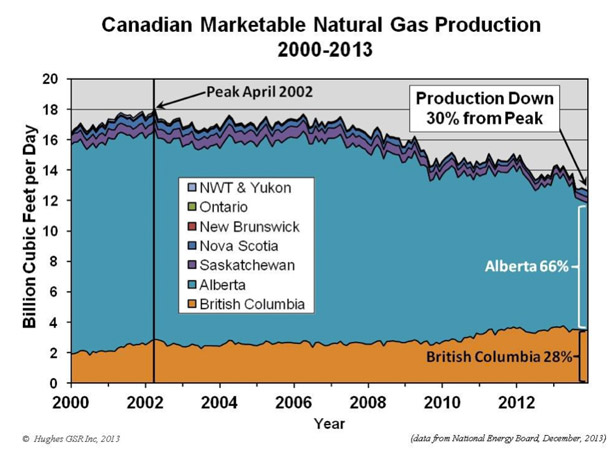 But is this true? Hughes thinks not. “Canadian production peaked in 2002 and is now down 30 per cent from its peak. The only province with substantial growth is BC, which constitutes 28 per cent of Canadian production (although it is now on a plateau),” he writes. “Coupled with current BC production, which is mostly committed to existing customers, meeting the NEB export approvals to date would require increasing BC’s gas production to nearly 50 per cent more than all of Canada currently produces – within less than a decade.” (emphasis added) 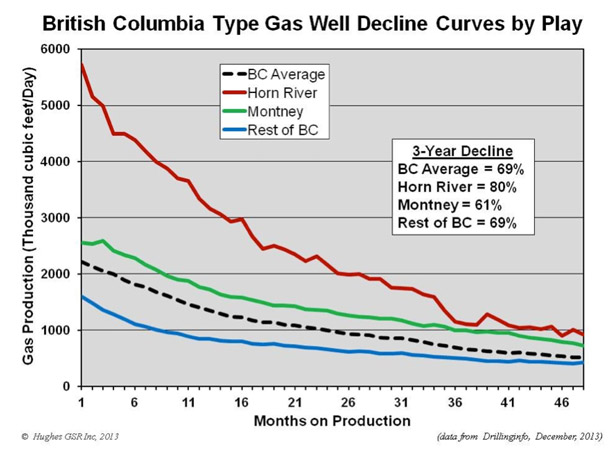 The decline rates for BC’s shale gas wells may not be quite as severe as Hughes has observed south of the border, but they are steeper than the conventional gas wells that made up BC production in the past.

In the Horn River Basin, near Fort Nelson – the second biggest shale gas play in the province – the 3-year drop-off averages 80%. The province’s biggest play, the Montney Shale near Fort St. John and Hudson’s Hope, the decline rate is 61% for the same period, compared with 69% for the whole province.

As the rate of decline is steepest in the first year, the overall field decline is less, averaging about 26% per year – meaning that on average 26% of BC gas production must be replaced each year by more drilling to keep production flat. 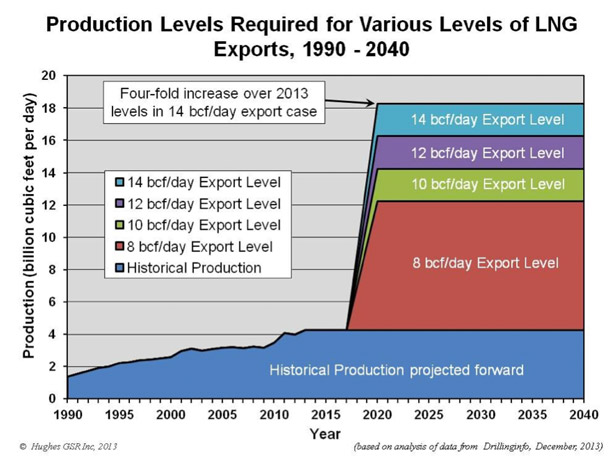 A warning worth heeding

Though both the NEB and BC Government are likely to pretend this report never came into existence – preferring instead to forge ahead with an industry built on exuberant talk – they are foolish to do so. Mr. Hughes is a man who knows of what he speaks. He headed unconventional gas research during his 32 years with the Geological Survey of Canada (GSC), and, since leaving there, has continued his research, publishing a seminal report earlier this year on shale gas and tight oil production in the US.

Mr. Hughes’ opinion is being sought by people around the world deciding the future of shale gas. In recent months, he has spoken to the European Parliament, academics, energy financiers, and global financial media. The work he’s done in the US is changing the game there and abroad.

But if Christy Clark and our regulator decide to ignore this warning, they do so at the public’s peril – not their own. For none of them will be in their current positions long enough to answer for the catastrophic choices they’re making today.