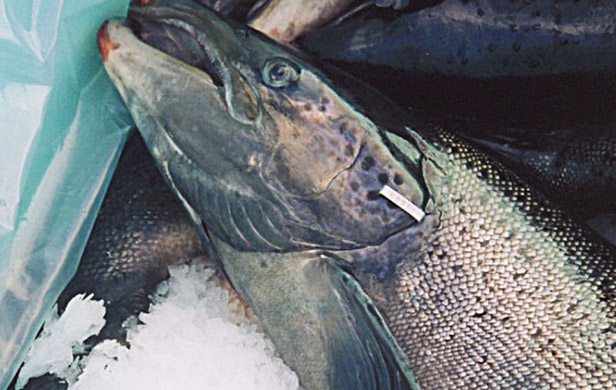 I now have reliable figures on slaughtered fish payments of your taxpayer dollars to billion dollar Norwegian derivative fish farms in BC, and others across Canada. Cermaq Mainstream, Marine Harvest and Grieg Seafood may be happy to hear I will eat some crow, as the BC figures are much lower than my earlier estimate.

The reason for having to make estimates is that fish farms typically do their best to prevent the public knowing how much taxpayer money they receive from us for diseased fish that foul our pristine oceans. Behind the scenes, they often have lawyers trying to keep such numbers, and in the BC case, the disease records for testing of their farms, from the public, as happened during the Cohen Commission. He didn’t buy it.

In this case, a fish farm legal injunction made my request wait 10 months before our taxpayer dollars were put in a table and sent to me. My estimate of $35 million in BC is incorrect. The payments to Cermaq Mainstream’s IHN diseased Clayoquot Sound farmed salmon are: $2.64 Million for 959,498 diseased salmon (report date: Nov 2012); and, $201,000 for infected equipment and supplies (report date: Jan 2013). The total is $2.8 Million, or $3 per fish, not $30 per fish.

You see, in addition to the figures I received, I noticed the St. John’s Telegram newspaper reported $33 Million of taxpayer money given to fish farms in Atlantic Canada for slaughtered diseased fish. Their table shows a bunch of handouts pretty close to the often-quoted CFIA $30 per fish.

Some East Coast farms get over $20 per dead fish

In July 2013, Manuel’s Arm, a Kelly Cove Salmon farm, was paid $23.96 per fish for 100,000 diseased fish, and its Pot Harbour/Hermitage Bay site was paid $8,232,000, or $23.52 per fish for 350,000 diseased fish in December 2012. In fact, the big story from the east is that at the same time fish are dying of ISA and other diseases and we’re paying for it, DFO is giving NL almost $400 million more taxpayer money to put in more open-net fish farms! What a waste. And one of the firms we gave money to, Gray Aqua, has been sliding in and out of bankruptcy proceedings since last summer.

The reasonable British Columbian has to ask: where is the money for BC’s wild salmon? We want $400 Million for habitat restoration. What is DFO actually spending here? DFO’s community habitat program for Vancouver Island is so small it is almost non-existent: $200,000. For all of BC it is $.9 M this year or .45% of the NL money. DFO: we want $400 Million for wild salmon here. Not simply the $1.8 M salmon licence money given to the Pacific Salmon Foundation, where the $400 M should go so BC once again takes control of its own fish with a made-in-BC program.

The real solution to fish farms is to get the old-tech dinosaurs out of the water, which the BC government can do in 60 days by cancelling leases. Even though fish farms say it can’t be done, I have a list of 65 different closed systems comprising more than 8,000 actual on-land farms around the world.

You may wonder why DFO backs in-ocean fish farms in BC at all. I sure do. And we all remember the Cohen Report recommended DFO be stripped of this conflict of interest and deal solely with wild salmon – the 2005 Wild Salmon Policy and 1986 Habitat Policy, with a new west coast director general for bringing back Fraser sockeye. None of these have happened since Report date of October 31, 2012.

It’s hard to fathom DFO’s interest in fish farms. Perhaps they believe what they and fish farms like to say: fish farms create employment and revenue. Well, I waited five years for the best source of info to update their numbers, and they show decisively that fish farms don’t contribute much of either.

The best stats, from BC Stats – that DFO paid for and put its name on, but acts as though they don’t exist – show this is not true.

In BC all aquaculture comprises a measly $61.9 Million of Gross Provincial Product, meaning only 9% of the fishing sector’s total of $667.4 M BC GPP contribution. Sport fishing is miles above at $325.7 M or 48.4%. And the employment that they talk of is similarly small at 1,700 or 12.2% in multiplier terms that include spin off jobs. The entire fish sector is 13,900 jobs, with sport fishing 60.4% at 8,400 jobs. The $400 Million for wild salmon restoration would do wonders for processing, commercial and sport fishing employment, not to mention the entire wild BC province.

And there’s more. I spotted a science paper that confirms what most supporters of wild salmon have always suspected: wild salmon stocks in BC have declined 50% since fish farms set up shop. The paper shows the same in Ireland, Scotland and Atlantic Canada. Note that Commercial sector employment has been cut 50%, 1,400 jobs, in the same time period.

So, I did some sleuthing and found that the actual number of real fish farm jobs in BC is a very small 795. Commercial job losses in the same period are 1,400 jobs due to the loss of wild salmon. So fish farm jobs likely eliminate jobs in other sectors, resulting in a net employment loss. The same can be said for revenue.

This does not add in losses in processing, and the sport sector from DFO allowing wild salmon to decline 50%. Little wonder the Cohen Commission said DFO is in a conflict of interest. His recommendation was that fish farm support needs to be eliminated and DFO should concentrate solely on the Wild Salmon Policy and its Habitat Policy.

USA report says commercial and sport fishing worth $199 Billion to the US economy, employing 1.7 million people