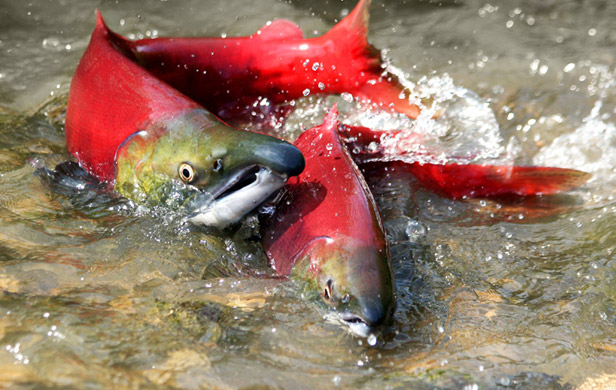 Expect big salmon numbers this summer. The Fraser sockeye run may be as high as 70 million. Yes, 70. And the most important sport angling species, chinook and coho, seem to be on the same meteoric route in 2014.

Fraser sockeye numbers peaked in the early 1970s and then declined, most particularly in the 20 year period from 1990 to 2009. This was the year the Cohen Commission was sent in to figure out why only 1.6 million sockeye returned to the Fraser, and just as it was getting rolling, 2010 returned more than 28.3 million Fraser sockeye (see video here).

While DFO has significant issues (including almost completely ignoring the Cohen Report), it has to be admitted it does a stellar job of sockeye science, and I have the approved pre-season estimate of the more than 100 subcomponent sockeye run from early May into late September for anyone who wants to immerse themselves in this science heavy process (download .pdf DFO 2014 sockeye forecast).

They have patchy data back to 1913, with better stats from the ‘50s to the present day. DFO uses four different models and puts out estimates based on five different levels of possible return from 10% to 90%. The 2014 range is: 7.2 million to 72.0 million, with an average of 22.8 million, with expectations at the high end.

Then DFO follows fry down rivers, for example, the Chilko counting fence, passing Mission and a seine fishery in the Strait of Georgia, with acoustic arrays in Queen Charlotte Sound as well as Juan de Fuca.

On the way back, test gillnetting is typically done in Port Renfrew as well as Johnstone St. Fish are counted crossing the Mission fence, and samples from all fisheries are sent for real-time DNA testing twice per week, with announcements on run timing, composition and fishing opportunities for commercial, sport and first nations coming every few days as summer progresses. Impressive.

Removal of fish farms may have contributed to big return

Why are the fish in good numbers? Good question. The 2010 high year contributes mostly to the run this year as sockeye are typically four year old fish on returning. It looks like the taking of fish farms producing chinook out of the water in the Discovery Islands (near Campbell River) in 2008 that were getting salmon leukemia virus (SLV) is one main reason – do note DFO followed this disease for years until they terminated research.

Doctors Kristi Miller and Brian Riddell will be ramping up Miller’s science lab, that you will remember showed a ‘viral signature’ disease that contributed to as high as 90% pre-spawn mortality in returning Fraser sockeye. But the 2010 fish were not infected, and thus returned and successfully spawned, resulting in, we hope, prodigious numbers, in 2014.

In addition, fish farms reduced their own fish numbers, particularly Marine Harvest, in 2011 to 2013 by 30% or 6- to 9-million smolts in the narrow Quadra Island to Sayward salt waters. So there were trillions fewer viral particles when the fry migrated.

You will be happy to know that Miller/Riddell will be testing a lot of fish this year, including those from fish farms. But you won’t be so happy to know that DFO, and the fish farms will be parsing news releases – if you followed the convoluted, non-transparent, fish farm refusal to allow BC disease-testing results to come out during the Cohen Commission, you will understand why.

Of note, is one subcomponent that has done well – the Harrison. Its long term average escapement, i.e. sockeye on the spawning beds is 13,500, but both 2010 and 2011 returns were 30 times higher than the long term average at 400,000. The Harrisons are the only subcomponent that migrates out Juan de Fuca Strait where there are no fish farms. They could not get sick, so they returned in healthy numbers. The rest of the Fraser sockeye migrate through Johnstone Strait.

Chinook and coho could see monster year too

But there is more to this story than fish farms. That is because – other than the Fraser 4-2s that DFO, in the Salmon Outlook, said further 2014 non-retention would be likely – around Vancouver Island, the fish return numbers of coho and chinook will be records, too.

First, the sockeye story. The largest run is the Alberni Inlet, Henderson, Nahmint, and Somass (Stamp and Sproat) rivers which typically returns 350,000 to 600,000 fish, with a high of 1.8 million. Sport and commercial fishing begins when it is established 200,000 fish are coming down the Inlet. I have seen years the run has not struggled up to this level.

As with all runs, there are always some younger, sexually precocious male fish, called Jacks. In the past, as three-year fish, the Alberni run had an average of 40,000; however, last year, there were, get this, 400,000 mixed in with the run. That implies a 2014 run ten times larger than the average, perhaps 4 million this year.

From volcanoes to Pineapple Expresses

While the fry do pass a couple of fish farms on the way out, the huge number of Jacks implies that ocean survival has been terrific. Perhaps the Alaska volcano that blew in 2008 showering the Bering Sea with iron oxide heavy dust was the reason, but the more likely event is the winter storms we now call Pineapple Expresses contribute to the Aleutian low-pressure cycle. The wind pushes surface waters aside, bringing nutrients to the sun-penetrating level, starting huge plankton blooms that feed the food chain. Sockeye eat plankton and krill.

Higher marine survival typically means more three year old Jacks. As chinook, these return as roughly 15 pound fish. The West Coast Van Isle hatcheries at Conuma in Nootka Sound and the Nitinat in Juan de Fuca returned Jacks up to 50% of their runs – this was common among other counted rivers. I can tell you from fishing the Nitinat in late November – nursing five fractured ribs, which kept me from fishing earlier – I landed four Jacks one day, some six weeks after the run had spawned and gone. Some years I catch zero in the entire season, even though these fish will beat all other fish to whack a lure.

There are no fish farms on either of these routes. And then there are the Cowichan chinook. As 1- to 2-year fish, they circle Georgia Strait before migrating out to the open ocean. Last year 7,000 returned – this run was down to the unheard of level of 1,068 spawners circa 2010, with, previously, a run average of 12,000 to 15,000 chinook with a high of 25,000. Last year 4,000 of the returnees were 3-year old springs! This points to a return in 2014 of higher numbers than the highest ever recorded. Van Isle chinook typically return 90% at four year old fish, which implies 40,000 chinook for the Cowichan alone in 2014.

And then there are coho. Last year WCVI wild coho returned in the Salmon Outlook’s highest measured category – 4. And those Georgia Strait coho, that crashed in the mid-80s, with 1- to 2-% return measured against parental spawners, are forecast at 15% – that means 15 fish for every fish that spawned in 2011, rather than 1. Many of these fish migrate past fish farms in the choked waters of Johnstone Strait. As farm numbers were down 30%, and ocean survival high, these two factors may explain the inside high coho numbers in 2014.

But it doesn’t explain high coho numbers on the WCVI. And they are expected to continue in high numbers in 2014. They don’t pass fish farms, hence, the return is based on higher marine survival.

There is great potential for inside coho fishing, now and in years to come. Brian Riddell, CEO, Pacific Salmon Foundation, is emphasizing rehabilitation projects to increase Georgia coho. He has estimated such a fishery could be worth $400- to $500-million additional sport fishing revenue, added to the $1 billion sport fishing creates in BC annually.