In mid-September, Damien Gillis had the rare privilege to capture this year’s astonishing sockeye fishery, off the south arm of the Fraser River. Amidst the largest Fraser sockeye return in nearly a century – some 35 million fish – Damien caught up with the commercial seine boat Snow Queen, hard at work. During one of the last openings of the season, Gillis documented the “set” of a lifetime for Captain Mitch Ponak and his crew: over 35,000 sockeye in one seine. It’s all covered here in vivid detail in this entertaining 6 min video.

Much has been said about this year’s unanticipated sockeye return – including erroneous claims from the fish farm industry that it somehow “proves” open net salmon farms aren’t adversely impacting wild salmon; if anything, it has raised more questions than it has answered. On this sunny September day, however, these amazing sockeye were a welcome sight and reminder of what healthy wild salmon runs mean to the communities, cultures, and economies of the entire BC coast and province – and of why we should be doing everything in our power to give these fish a fighting chance. 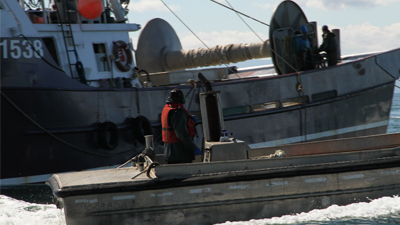