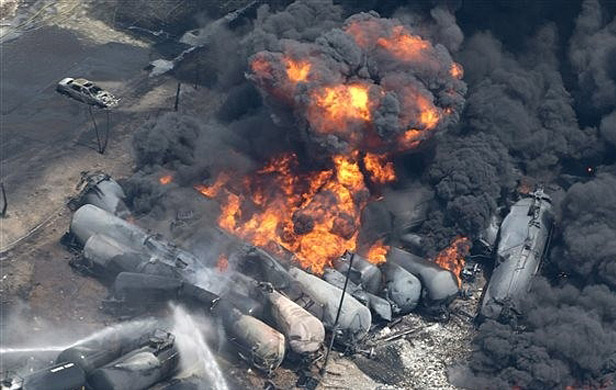 MONTREAL – Editors and news directors across the country have selected the Lac-Megantic train derailment as Canada’s News Story of the Year, garnering 30.6% of the vote – ahead of Senate expenses and the Rob Ford scandal, which drew 24.2% and 22.6%, respectively.

The following are select quotes from news editors across the country on the Lac-Megantic story:

LAC-MEGANTIC, Que. – Quotes from news directors and editors who chose the Lac-Megantic train derailment as Canada’s News Story of the Year for 2013 in the annual poll of news organizations by The Canadian Press:

[quote]When a train roars into a small community’s downtown and the subsequent derailment kills nearly 50 people and destroys more than 30 buildings, it’s a tragedy of massive proportion.[/quote]

[quote]A major catastrophe that should never have happened and which has propelled discussions of rail safety and the safety of transporting our top export — crude.[/quote]

[quote]Considering the scale of loss and the many ‘what ifs’ and ‘if onlys’ that made it that much more compelling, the Lac-Megantic tragedy seems the clear choice for news story of the year.[/quote]

[quote]The impact of the freight train cars exploding in Lac-Megantic was a tragic and dramatic story all on its own — the trusted railway destroying the core of the small tourist town. But it’s the breadth of the fallout from the disaster that makes it the news story of the year, with questions raised about railway safety; about the transport of dangerous goods; about how uninformed municipalities are about what passes through their backyards; about U.S. vs Canadian regulations. And then there’s the ongoing human story of dignity, heartbreak, trauma, guilt, and efforts to rebuild.[/quote]

[quote]There are so many ramifications which could could come out of this pipeline versus rail transit of oil rail safety issues and oversight by governments…plus the impact on a small town…which will need millions to rebuild.[/quote]

[quote]The Lac-Megantic disaster was one which caused everyone who lives in a small Canadian city or town that has freight trains rumbling through it stop and ponder — ‘that could happen to me some day.’ From the shear enormity of the death, destruction and upheaval for a small community’s way of life, to the shaken trust we all have in our rail safety laws, Lac-Megantic will likely become a red-letter day in the world of railway safety going forward.[/quote]

[quote]Events like the train disaster are not supposed to happen in Canada, but when they do they raise serious questions about the safety of our rail system and just what chemicals are being transported through hundreds of unknowing communities from one end of the country to the other.[/quote]

[quote]For residents of many small towns in Canada where the railway often runs through the middle of the community, the story was chilling; a runaway train runs off the rails and explodes, causing destruction to everything in its path. It hits close to home, what happened in Lac-Megantic could have happened in their town. It’s a stark reminder of the hazardous cargo that is travelling through these small communities, with the public largely unaware of the potential danger. It should be a wake-up call for all of us.[/quote]

[quote]Disasters don’t get any bigger. A human tragedy with a lot of political and policy implications going forward.[/quote]

[quote]No story tore at my heart, or had such clear public policy ramifications, as the tragedy in Lac-Megantic.[/quote]

[quote]A tragic rail disaster that has called in to question so many things. Government oversight of transportation, labour cutbacks versus safety concerns, environmental issues concerning the Bakken oil fields…even Quebec versus the rest of Canada in terms of disaster relief and compassion.[/quote]

[quote]Made everyone feel vulnerable. Could have happened anywhere. So many helpless were killed suddenly, tragically.

[quote]A devastated downtown, 47 victims, a terrible fire, an unparalleled environmental disaster for Quebec and the discovery of laxness in the monitoring of train transport.[/quote]

[quote]With its sheer magnitude, the Lac-Megantic explosion stood out in 2013 for many reasons. This human, social, environmental and government drama captured the imagination of Quebecers and Canadians alike while making news pretty much all over the world.[/quote]

[quote]This tragedy stunned the entire country. It led to people becoming aware of the risks involved in transporting oil by train and of the poor condition of the rail network. These topics resonated in Ottawa.[/quote]

[quote]Hugely spectacular, but especially in terms of safety for places where trains carry dangerou materials. The federal government reviewed its regulations.[/quote]