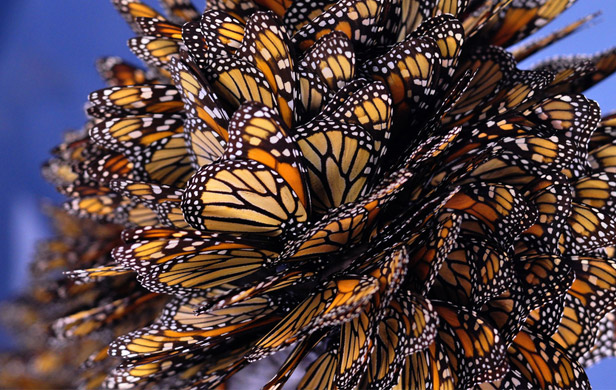 From the age of five, Fred Urquhart was fascinated by monarch butterflies in his Toronto neighbourhood. Born in 1911, he spent hours watching the orange and black insects flutter about, wondering: Where did they go in winter? At school, he read voraciously about nature, especially monarchs and other insects.

He eventually became a zoology professor and married Norah Patterson, who shared his love of butterflies, as did their son, Doug. To answer the question that had nagged Fred since childhood, in 1940 they found a way to attach tiny labels to individual butterflies that read, “Send to Zoology University of Toronto Canada.” They started the Insect Migration Association, now known as Monarch Watch, enlisting “citizen scientists” to tag butterflies.

They finally solved the mystery in 1975 – with the help of two citizen scientists in Mexico. Ken Brugger and Catalina Aguado had come across millions of butterflies in the mountains west of Mexico City. The couple took the Urquharts there in 1976 and, miraculously, Fred found one of his tagged insects within hours. Their fascinating story is told in the documentary film Flight of the Butterflies and in an episode of CBC’s The Nature of Things, “The Great Butterfly Hunt”.

Now, monarchs are in trouble, their numbers drastically reduced from the days when the Urquharts pursued their passion. And once again, experts and others are calling on citizen scientists – and politicians – to help.

Letter from a Mexican poet

Monarch populations in Mexico plummeted to a record low of about 33.5 million this year from an annual average over the past 15 years of about 350 million and highs of more than one billion. Causes include illegal logging in Mexico, herbicide use on genetically modified crops in the U.S. and climate change.

In February, in response to a letter by Mexican poet Homero Aridjis, signed by more than 100 scientists, writers and environmentalists – including Canadians Margaret Atwood, Michael Ondaatje and John Ralston Saul – U.S. President Barack Obama, Mexican President Enrique Peña Nieto and Canadian Prime Minister Stephen Harper agreed to “establish a working group to ensure the conservation of the monarch butterfly, a species that symbolizes our association.”

The letter to leaders said:

[quote]As Mexico is addressing the logging issues, so now must the United States and Canada address the effects of our current agricultural policies.[/quote]

Those problematic practices are mainly associated with large-scale planting of corn and soy genetically modified to resist the herbicide Roundup, or glyphosate. It doesn’t kill crops – just pretty much everything else, including the milkweed monarchs need to lay their eggs and that is their caterpillars’ main food.

How citizen scientists can help

We can only hope our leaders live up to their commitment, and we can speak up to hold them to it. But we can also become citizen scientists to help researchers better understand the butterfly’s breeding, migrating and overwintering cycles and help monarchs survive. Monarch Watch offers classroom resources, student-scientist research projects and information about building monarch way stations, raising your own monarchs and planting milkweed and butterfly gardens. The U.S. Monarch Joint Venture website offers resources for citizens to track migration, count butterflies and monitor larval populations and disease for monarchs – as well as other butterflies.

The David Suzuki Foundation website also offers a range of resources and activities to help protect these pollinating insects. And, as part of its Homegrown National Park Project, the foundation is launching a Toronto-based campaign in April to crowd-source a milkweed corridor through the city.

Helping monarch and other butterflies and insects is a fun way to get kids interested in nature’s wonders. Planting milkweed and nectar-producing native flowers on balconies and in gardens, parks and green spaces will beautify the area around your home and bring bees and butterflies to the neighbourhood.

Scientists still don’t know everything about monarchs and their migration, but we know they play an important role in ecosystems. And we know everything in nature is interconnected. When something that travels such long distances through a range of habitats is removed, it can have cascading effects on those environments.

The world wouldn’t know where North American monarchs travel if it weren’t for the Urquharts and the continent-wide battalion of citizen scientists they inspired. We can all help ensure monarch butterflies continue this wonderful journey every year.