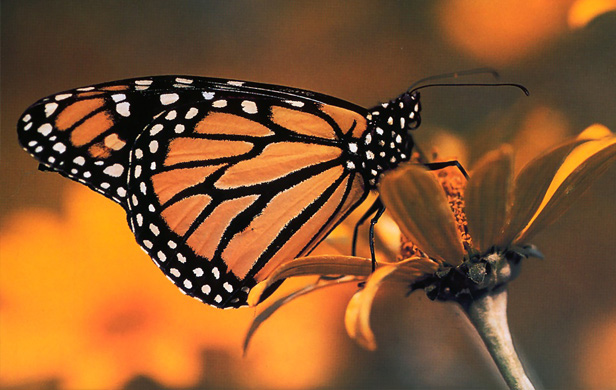 What weighs less than a paperclip, tastes terrible and can travel thousands of kilometres without a map? Hint: this delicate critter is tawny-orange with black veins and white spots and has been mysteriously absent from Canada this summer.

It’s the monarch butterfly. Each year, eastern populations of these amazing frequent flyers flit between forests in central Mexico and southern Ontario.

It’s the only North American butterfly known to migrate and, most surprisingly, no single butterfly makes the return trip. In spring the butterflies depart from Mexico for states like Texas, where they breed and die. The offspring continue northward, repeating the reproductive cycle three or four times before arriving in Ontario.

Toward the end of summer, a generation of super-monarchs is born that survives for seven or eight months and makes the incredible journey south. Even though they’ve never been to Mexico’s volcanic mountains, the butterflies use an internal compass and landscape to guide them to the forests where their ancestors hibernated the previous winter.

Unfortunately, the past year has been bad for monarchs. Historically, about 350 million overwinter in Mexico, so densely covering the coniferous branches that they bow under the weight. This past winter scientists estimated only 60 million made it – a decline of more than 80 per cent.

Why are monarch populations at a 20-year low? Although the Mexican government has halted industrial logging in their winter home, serious threats remain, including illegal logging. Scientists say the main threats, though, are record-setting heat waves (which reduce reproductive success) and pervasive use of genetically modified crops.

One of the most important reproductive areas for the monarch is the U.S. Midwest, which has historically been blanketed with milkweed. This plant contains small amounts of cardenolide, a foul-tasting substance that can be toxic in large quantities. The monarch caterpillar eats only milkweed for this reason. Predators dislike the cardenolide stored in the monarch’s body, so they learn to steer clear of flittering things with orange and black wings.

Despite the conversion of much of the arable land in the Midwest to agriculture during the past couple of centuries, milkweed continued to grow along edges and between rows of crops – feeding millions of monarch caterpillars.

Over the past decade, about 150 million hectares of farmland in the region – an area about the size of Saskatchewan – have been planted with soybean and corn genetically modified to tolerate herbicides, known as “Roundup Ready” crops. Instead of tilling fields, farmers spray herbicides that kill all plants but the crop. This has wiped out much of the milkweed.

With a decline of monarchs in Mexico and pervasive threats during migration, it wasn’t entirely surprising that they arrived in Canada six weeks later than normal this summer in unprecedented low numbers. Point Pelee National Park in Leamington, Ontario, even cancelled its annual monarch count because of lack of butterflies.

While the future of the monarch looks bleak, we can all help ensure its survival.

At home you can create a butterfly garden to provide habitat and food for monarchs and other pollinators. Plant milkweed and nectar-producing native flowers, like wild bergamot, New England aster and black-eyed Susans – especially ones with yellow, pink, orange and purple flowers. Adding these plants to gardens, balconies, parks and green spaces – and encouraging local schools, businesses and institutions to do the same – will help bees and butterflies stay healthy and well-fed.

Want to go bigger than making your yard or park a butterfly haven? Check out the David Suzuki Foundation’s Homegrown National Park project in Toronto. It aims to create a butterfly corridor through the heart of the city by encouraging residents, businesses and institutions to add more green to yards, balconies, rooftops, streets, alleys and parks.

In the project’s first year, pollinator gardens were planted in more than a dozen locations along the Homegrown National Park corridor, including a network of “canoe gardens” in local parks and bee-and-butterfly gardens in schoolyards, health facilities and front- and backyards. Momentum is building for even grander green interventions next year.

So, while the monarchs have already begun their journey south, I encourage you to start preparing for next year’s butterflies. Head to your local nursery and get your milkweed on. And do what you can to bring nature to your neighbourhood.

3 thoughts on “Monarch Butterflies in free-fall: How you can help”