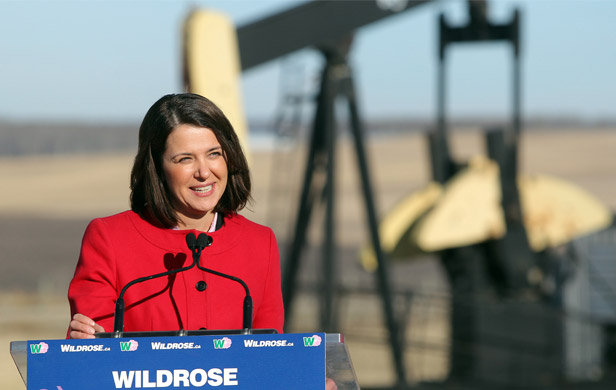 [quote]I accept that climate change is a reality, as do our members. I accept that there’s a human influence on it. I leave the debate about the details to the science about (to) what extent it is and how fast it is occurring.[/quote]

Smith has been sharply criticized this week for refusing to say if she believes climate change exists, echoing disastrous statements she made in last year’s election campaign.

Afraid of what her members thought

Smith said Friday she has hedged in the past because she wasn’t sure where party rank and file stood on the issue, and said what opinions she did hear were across the spectrum.

“I really didn’t have a gauge of where our members were at because it had never come forward for debate,” said Smith.

“Remember, we are a grassroots party and I do take my marching orders from our members. When our members are silent on particular issues, I try my best to interpret. Sometimes we get it wrong, and in this case I’m pleased to see our members want us to move forward on a policy.”

Party delegates will vote Saturday on two resolutions to direct the caucus to push for measures to reduce greenhouse gases, which lead to the extreme weather anomalies associated with climate change.

Smith said a straw poll of delegates on Friday indicated those resolutions will pass overwhelmingly, and said she takes that as a green light to speak out on climate change.

“It gives me a mandate,” she said.

The science of climate change has bedevilled the right of centre Wildrose party for more than a year.

According to some political observers it was the single biggest reason the party’s surging popularity fell through the floor just days before the vote in last year’s election, after Smith announced the science of climate change was not settled.

Earlier this week, Smith declined to spell out her stand on climate change when asked by reporters about the upcoming environmental resolutions.

That led NDP Leader Brian Mason and Environment Minister Diana McQueen to sharply criticize Smith as a poor leader for refusing to stake a stand on a matter of clear importance to Albertans.

McQueen also stated that Alberta would be seen as a “joke” on the international stage if it was represented by a party that didn’t believe in climate change.

“I don’t accept a lecture from a do-nothing environment minister like Diana McQueen,” she said.

“If you look at our neighbours in Ontario and Quebec, they’re already below their 1990 levels (while) Alberta has increased its greenhouse gas emissions by 46 per cent.

“So every time this issue comes up the reason why (McQueen) points at our party is because there’s been absolutely no progress by her party — and it’s affecting Alberta.”

The Wildrose also moved Friday to cancel the headline speaker for a Nov. 2 party fundraiser for MLA Jason Hale.

The speaker was author/filmmaker Bruno Wiskel, known for the book “The Sky is Not Falling,” which argues that glaciers have been melting and water levels rising for millenia, long before humans showed up.

Smith said Hale told her Wiskel was booked by an over-enthusiastic volunteer.

“I understand the fundraiser was put together by one of his well-meaning volunteers, and that the speaker has been cancelled,” said Smith.

“It’s very clear that our members want us to go in a particular direction.”

Stefan Baranski, spokesman for Premier Alison Redford, said the volunteer explanation is a weak fabrication for what was clearly a party-sanctioned event.

He said the fundraiser shows that what the party says and what it believes are two different things.

“Albertans won’t be fooled by Danielle Smith and her promises to sweep their extreme agenda under the rug,” said Baranski.

The Wildrose is made up of many disaffected former Tories who grew disenchanted with what they called the party’s top-down management style and its decision to abandon the fiscal conservatism of former premier Ralph Klein and embrace taking on debt to pay for infrastructure.

The blood-feud acrimony surfaced again Friday when the Wildrose kicked out three PC staffers, accusing them of posing as Wildrose delegates in order to spy on the debate.

Smith said all parties allow opposition members to attend rival events as long as they register and are clearly marked as observers.

Baranski said his staffers did register as observers, but were turfed anyway, officially for lack of space.

“What that says to us is the Wildrose is clearly hiding something, clearly afraid of what looking into what their members are debating,” said Baranski.

Smith said that’s not the case.

“We’ve been open to having observers in the past,” she said.

“But if you’re going to try to sneak in and pretend you’re a member and start videotaping or audiotaping other members’ conversations with them thinking that you’re here as another Wildroser, we’re not going to allow for that.

“If they’re going to sneak their way in to spy on us, what else would they expect us to do?”

A mandatory leadership review was also held Friday and Smith received the support of 90.2 per cent of members in the vote.