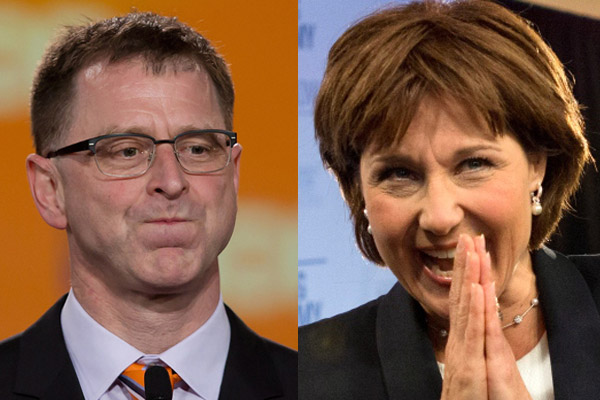 As 2013 winds down, veteran BC journalist Sid Tafler looks back at the province’s 2013 election and the surprising (to some) victory of the BC Liberal Party.

On the night of the BC election, a supporter of Green Party candidate Andrew Weaver told a TV reporter he was overjoyed at Weaver’s win in Oak Bay-Gordon Head. Then he added that he was devastated at the overall result – a fourth consecutive Liberal majority.

Well, I guess the take-away message is, if you don’t vote to defeat the party in power, you vote to elect them.

That’s just one lesson of the May 14 election, in which the Liberals supposedly overcame a substantial NDP lead to win a surprise victory, even increasing their seat count by four.

I say supposedly because only the naïve, including most of the political media in this province, would have thought the NDP – who have only won three elections of 23 in the last 80 years – were a shoo-in as the campaign began in mid-April. That’s just a little better than a 10% success rate, or a 90% failure rate.

It could be argued that if the NDP lost the election, so did the political media, who might have done better if they did more reporting and less repeating. Throughout the campaign, members of the press gallery and the rest of the media were fixated on the polls, which formed the subtext of the entire election, instead of the issues, the campaign itself and, most importantly, the record of the government seeking our confidence in a new mandate.

But what about those opinion polls? Didn’t they all say the NDP was sure to win the election?

Well, we should all know by now that polls, in the age of cell phones and voter apathy, are predictably unreliable. Take two other provincial elections last year as examples. The polls were wrong in the Quebec election, predicting a PQ majority government (the result was a PQ minority, with the supposedly spent Liberals virtually tying the PQ in the popular vote and nearly winning re-election) and wrong again in the Alberta election, in which the upstart Wild Rose party was predicted to cruise to victory (instead the Conservatives cruised and the Wild Rose crashed).

Notice the commonality here with these two elections and the Liberal victory in BC? In all three cases, the party in power attracted much more support on election day than they did in the polls.

The conclusion is that opinion polls, mostly conducted months or weeks before the election, are about the past – the government’s record. Hypothetically, if I were to vote today, a month before the election, I would throw the bums out. Look at all those scandals and, hey, they hiked my Mom’s care home fee by 40%. But the actual election, those 30 seconds I spend alone in the voting booth, are about the future, my fears, my job, or the job I hope to have, which the government in power is promising. So let’s play it safe and throw the bums in. In a nutshell, how you would vote may be very different from how you do vote, or even if you vote.

If they’re so unreliable, why did the B.C. media give the polls so much credence leading up to and during the campaign? The only answer I can provide is laziness or a failure of motivation. It’s so easy to be handed the results of a poll and then slice and dice the numbers, get reaction from the parties, candidates and pundits, compare it to last week’s poll, rather than dig around for real campaign coverage and analysis. It’s great publicity for the polling companies, and it’s FREE! But as Christy Clark said as she licked her fingers after the election, you get what you pay for.

There are other psychological factors at play when the polls predict a victory for the NDP opposition. Some soft NDP supporters feel they don’t have to bother to vote — after all, it’s such a bother to draw two lines over a piece of paper to form an X. Others feel they can vote Green — sure, let’s have a Green MLA or two in a legislature dominated by the NDP government.

The absence of all those non-voters of every political persuasion or state of indecision is a major factor, especially since they form — and distort — part of the sample of respondents to opinion polls. “Here’s how I would vote,” they tell pollsters, but on election day, they don’t bother. In the early 1980s, the turnout of eligible voters in BC was in the 70% range, but in the 2009 and 2013 elections, it sank to the low 50s. The difference is 600,000 people in B.C. who would rather watch Duck Dynasty than choose which government decides trivial questions like how our children are educated, whether the doctor will be there when you have a heart attack, or what you’ll pay for hydro or even if BC Hydro will exist in the years to come.

Back in 1984, I commissioned and conducted a poll of the Victoria riding for Monday Magazine a few weeks before the federal election. As the results of our in-house poll came in, I felt a little guilty compiling the numbers and sharing them with readers. What right did I have to know the intention of the electorate before they voted? As it turned out, the poll — phoning and methodology supplied by UVic students — was almost a mirror image of the result on election day. In the 1980s, people still answered their phones, read newspapers (remember them?) and believed it was their civic duty to participate in the electoral system, by actually voting, and even telling nosy pollsters what party they supported.

So what happened between then and now? Here’s a partial list: mobile phones, electronic voice mail, call display, digital autodialing, privacy concerns, a disengaged, diminished media, and of course, the forementioned voter apathy and alienation.

These factors form high barriers between pollsters and potential voters. While you’re trying to reach me, I’m in the bar with my cell phone, and the land line you’re calling is out of order because I cancelled it last year. Or I check call display and don’t answer because I don’t know who you are — or because I do and don’t want to talk to you. Or I pick up the receiver, then hang up again during the telltale one-second delay while the auto-dialer in your calling system shuttles the call to a live pollster. Or you actually reach me, but no, I won’t tell you how I’m going to vote, because it’s none of your business, and who the hell are you anyway?

Other pollsters use robocalls or online polls, but the evidence is, these methods may be even less accurate than live calling.

The difficulty of reaching voters also seriously affects the political parties themselves, especially the NDP, which uses hundreds of volunteer callers at sweaty campaign phone banks calling for hours on end – and, in many cases, getting little usable data from voters. It seems like a terrible waste of time, but the callers are eager and unpaid, so at least it keeps them busy and gives them the illusion of helping the campaign.

So the misdirected campaign run by the supposedly poll-leading NDP was the fourth wobbly leg of the election footstool, already unbalanced by misleading polls, absentee voters and distracted media.

NDP campaign to blame too

Adrian Dix and the other brain trusters in the NDP backrooms decided they were going to redefine politics in B.C., from the stick-and-knife fight of the last century to a genteel garden tea party. The NDP would stay positive and refuse to stoop to the level of name-calling and mud-throwing of the nasty, supposedly desperate Liberals. Fine idea, except they never asked Christy Clark nor the rest of us if we approved.

So when the Liberals attacked Dix, often with lies and distortions, just as often he didn’t respond, nor did he exploit the government’s nasty scandals and disastrous mismanagement and policy flops (BC Hydro, BC Rail, HST, BC Ferries among others).

Just imagine telling your professional hockey team to refrain from body-checking because it’s not nice. You’d lose every game, until your players limped off the ice and quit.

And Dix utterly failed to articulate his own vision of government. The Liberals did it in a single word: Jobs (whether you believe them or not).

So just what did the NDP stand for? During the campaign, I scoured the websites of Victoria area NDP candidates like Carole James, Rob Fleming, Jessica Van der Veen. What local policies did they support — funding for the new Johnson Street bridge, approval or not for the highly controversial sewage treatment program (mandated by the Liberal government, but considered wasteful and misguided by many people in the capital)?

I found nothing about policy on these candidates’ pages, neither provincial nor local — a big goose egg. The message was vote for us just because. These websites are crucial, because a quick browse online is how many people make last-minute decisions these days about where to eat dinner, go on holidays, or pick the party that will run the province for the next four years.

The campaign, other than out-moded joe-jobs like door-knocking and phoning, was being managed by the heavy thinkers at party HQ in Burnaby, who gave the voters fuzzy messaging and the Liberals a pass on all their wrong-doing, failed policies and dubious promises. Like the navigator of the Queen of the North, they blithely ran into a reef and scuttled the ship.

And there the ship will remain until they find the courage to choose a capable new leader and conduct a thorough overhaul of party personnel and tactics aimed at running a party and campaign designed for the 21st century.

And the rest of us? We must learn to ignore the polls, demand more of our media and vote both for and against the parties running to form the government.

Sid Tafler is  has been a journalist in BC for 30 years. He is a former contributor and columnist for the Globe and Mail and editor of Monday Magazine.