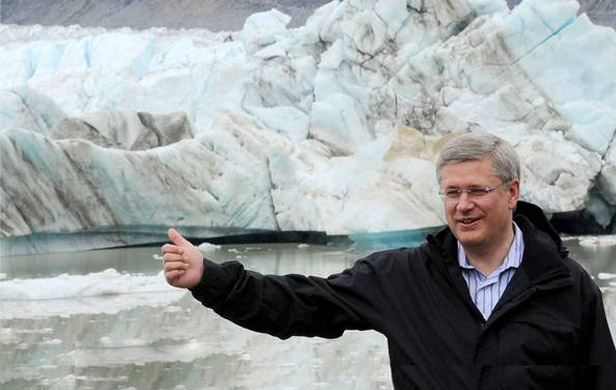 OTTAWA – The Conservative government has responded to an international report on “unequivocal” global warming by slamming past Liberal inaction and renewing its warning of an alleged NDP carbon tax.

The latest report Friday from the Intergovernmental Panel on Climate Change confirms the planet is heating up and that it’s “extremely likely” human activities are the cause.

“Warming of the climate system is unequivocal, and since the 1950s, many of the observed changes are unprecedented over decades to millennia,” said the scientific report released in Stockholm.

[quote]The atmosphere and ocean have warmed, the amounts of snow and ice have diminished, sea level has risen, and the concentrations of greenhouse gases have increased.[/quote]

The report says the effects are especially apparent in the Northern Hemisphere, affecting everything from sea ice and snow fall to permafrost.

While environmental groups and some governments around the world used the report as a clarion call for action, Conservative Environment Minister Leona Aglukkaq issued a statement saying her government is already “playing a leadership role in addressing climate change.” Said Aglukkaq in the release:

[quote]Unlike the previous Liberal government, under whose watch greenhouse gas emissions rose by almost 30 per cent, or the NDP, who want a $21-billion carbon tax, our government is actually reducing greenhouse gases and standing up for Canadian jobs[/quote]

Canada, however, is on pace to achieve only half of its 2020 promise to reduce greenhouse gases by 17 per cent below 2005 levels, according to Environment Canada.

And of the reductions made, 75 per cent were attributed to provincial actions in a 2012 report by the National Round Table on the Environment and the Economy — a group the Conservative government has since closed down.

US on track to meet its targets

The State Department in Washington, meanwhile, reported Thursday that the United States is on track to meet its 2020 target.

“Once again, the science grows clearer, the case grows more compelling, and the costs of inaction grow beyond anything that anyone with conscience or common sense should be willing to even contemplate,” Kerry said in a statement.

Harper won’t take ‘No’ for an answer on Keystone XL

The contrast in tone on the climate file between Ottawa and Washington was reinforced Thursday when Prime Minister Stephen Harper told a forum in New York that “you don’t take ‘No’ for an answer” on the controversial Keystone XL pipeline.

The TransCanada project to export Alberta bitumen to refineries on the U.S. Gulf Coast, which still needs President Barack Obama’s approval, has become a potent symbol for American environmentalists.

“We have an opportunity to rise to the challenge of protecting our kids’ future, so let’s not blow it to score political points and prop up oil company profits,” said Keith Stewart of Greenpeace Canada.

“This report should be a call to action for one of the greatest environmental challenges of our generation,” said NDP environment critic Megan Leslie, “not the basis for Conservative attacks on non-existent NDP policies.”

The IPCC report, the fifth by the UN-sanctioned intergovernmental panel, is designed to provide governments with solid scientific evidence to support policy making.

The reports also make up the baseline for UN negotiations toward a new global climate deal, which is supposed to be completed in 2015.

To that end, the IPCC reported that each of the last three decades has been successively warmer than any since 1850.

Canada can expect disproportionate climate effects because of its northern latitude.

“From a Canadian point of view it’s important to remember that the temperature change we experience in Canada is larger than the global average temperature change,” Greg Flato, a climate scientist with Environment Canada, said in an interview.

“That’s been the case in the historical observations and that’s been projected to continue in these climate model projections of the future.”

Burning fossil fuels is the driving force, says the report.

Thomas Stocker, a co-chair of the IPCC working group, flatly asserted in an accompanying release that “substantial and sustained reductions of greenhouse gas emissions” are required.

The Canadian Association of Petroleum Producers noted that global energy demand is expected to grow by 35 per cent by 2035.

“Most economists agree that most of this demand will be met by fossil fuels for the foreseeable future,” CAPP spokesman Alex Ferguson said in an email.

Ferguson said the oilsands account for just 0.14 per cent of global GHG emissions, and Alberta requires a carbon tax of $15 per tonne — something many other oil exporting countries don’t have.

Amid the accusations and counter-claims, Ian Bruce of the David Suzuki Foundation said the IPCC report actually does offer a message of hope, if governments have the will to hear it.

“Our parents’ generation didn’t know about climate change, but we do,” Bruce said. “It’s really up to our generation to tackle this problem.”