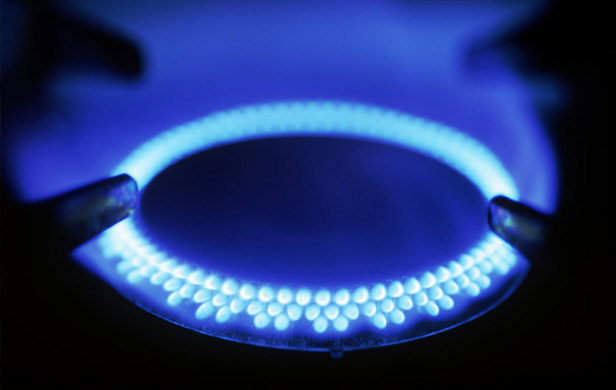 by Jonathan Fahey, The Associated Press

NEW YORK – The frigid winter of 2014 is setting the price of natural gas on fire.

Friday, the price in the futures market soared past $5 per 1,000 cubic feet, up 9 per cent for the day to the highest level in three and a half years. The price of natural gas is up 29 per cent in two weeks, and is 50 per cent higher than last year at this time.

Record amounts of natural gas are being burned for heat and electricity. Meanwhile, it’s so cold that drillers are struggling to produce enough to keep up with the high demand. So much natural gas is coming out of storage that the Energy Department says supplies have fallen 20 per cent below a year ago — and that was before this latest cold spell. Says energy analyst Stephen Schork:

To understand the price increase, just look at the thermometer. A second major cold snap this month is gripping much of the country, including the heavily-populated Northeast. And forecasters are now predicting colder weather in the weeks to come, extending south through Texas.

Natural gas is used by half the nation’s households for heating, making it the most important heating fuel. Electricity is the second most popular heating source, and electric power generators use natural gas to generate power more than any other fuel except for coal.

Commodity Weather Group, which predicts heating demand for energy companies and consumers, said in a report Friday that periodic breaks in the cold weather are expected to be “weaker and briefer, extending the duration of colder weather” in late January and early February.

Shale gas wells can freeze up

There are a couple of other factors at play. In the past, much of U.S. natural gas was produced in the Gulf of Mexico. If weather disrupted supplies there, it was typically in the early fall, during hurricane season, when heating and electricity demand are low and natural gas storage facilities are mostly full in preparation for winter.

Now, much of U.S. production comes from on-shore formations that are more susceptible to cold, ice and snow. Wells that are not designed for such extreme conditions can freeze, halting production.

“Now the threat to production is when demand is at its highest,” Schork says.

Also, electric utilities have for several years been switching to cheaper natural gas for power generation. And new pipelines aren’t being built fast enough to deliver all the gas required at times of high demand. That can lead to regional shortages that send prices skyrocketing.

When the Calvert Cliffs Nuclear Station in Maryland shut down earlier this week because of an electrical problem brought on by snow and ice, power generators across the East Coast scrambled to replace the lost power by cranking up natural gas-fired plants. That sent natural gas prices for immediate delivery, known as the spot price, to a record $120 per 1,000 cubic feet in some markets on the East Coast. To put that in perspective, that’s equivalent to oil at more than $700 per barrel.

Analysts say there is plenty of gas to replenish supplies, and drillers will scramble to boost production so they can fetch prices they haven’t seen since the summer of 2010.

If, that is, the weather heats up later in February and March. If it’s still cold when baseball season opens in early April, though, Schork says, “we’ll be looking at much higher natural gas prices.”