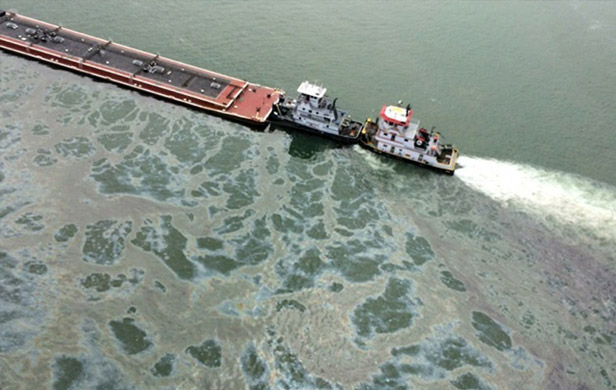 by Michael Graczyk, The Associated Press

TEXAS CITY, Texas – The cleanup of an unknown amount of thick, sticky oil that spilled into the Galveston Bay blocked traffic Sunday between the Gulf of Mexico and one of the world’s busiest petrochemical transportation waterways, affecting all vessels, even cruise ships.

A barge carrying nearly a million gallons of marine fuel oil collided with a ship Saturday afternoon, springing a leak. Officials believe only one of the barge’s tanks — which holds 168,000 gallons, was breached, though Coast Guard Petty Officer Andy Kendrick said Sunday it wasn’t clear how much oil spilled.

“Unified command is aware of the situation and is communicating with the cruise ship companies,” Danus said.

Area home to fish and wildlife

The area is home to popular bird habitats, especially during the approaching migratory shorebird season, but Kendrick said there have been no reports of wildlife being impacted.

The Texas City dike, a popular fishing spot that goes out into the Gulf for a few miles, is also closed. Lee Rilat, 58, owns Lee’s Bait and Tackle, the last store before the access road to the dike, which was blocked by a police car on a breezy, overcast Sunday. If it weren’t for the spill, Rilat’s business would be hopping.

[quote]This would be the first spring deal, the first real weekend for fishing.[/quote]

Rilat said. He says ships and barges have collided before, but this is the first time — at least this year — that someone has sprung a leak. His wife, Brenda Rilat, said sea fog was hanging over the bay Saturday.

Rilat, who’s lived in the area most of his life, doesn’t think the spill is too big of a deal.

“It’ll be fine. Everything’s going to be lovely. Mother Nature takes care of its own,” he said.

The collision was still being investigated, the Coast Guard said.

The captain of the 585-foot ship, Summer Wind, reported the spill just after noon Saturday. Six crew members from the tow vessel, which was going from Texas City to Bolivar, were injured, the Coast Guard said.

Kirby Inland Marine, which owns the tow vessel and barge, is working with the Texas General Land Office and many other federal, state and non-profit agencies to respond to the spill, The Coast Guard said. Tara Kilgore, an operations co-ordinator with Kirby Inland Marine, declined to comment Saturday.

“That stuff is terrible to have to clean up,” he said.

Richard Gibbons, the conservation director of the Houston Audubon Society, said there is important shorebird habitat on both sides of the ship channel. One is the Bolivar Flats Shorebird Sanctuary just to the east, which Gibbons said attracts 50,000 to 70,000 shorebirds to shallow mud flats that are perfect foraging habitat.

“The timing really couldn’t be much worse since we’re approaching the peak shorebird migration season,” Gibbons said. He added that tens of thousands of wintering birds remain in the area.

Monday marks the 25th anniversary of the Exxon Valdez spill off the coast of Alaska. Suydam said that spill spurred the creation of the General Land Office’s Oil Spill and Prevention Division, which is funded by a tax on imported oil that the state legislature passed after the Valdez spill.