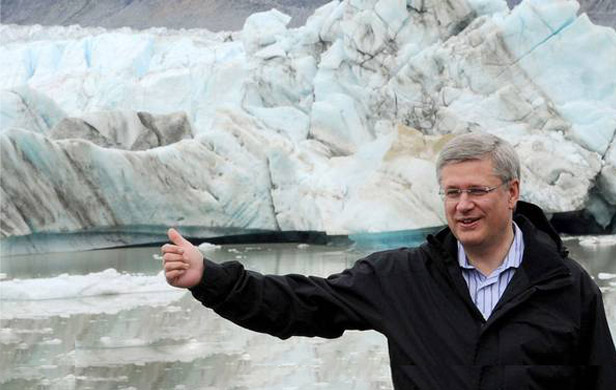 With another round of international climate negotiations opening this week in Warsaw, Poland, and a new poll finding Canadians wanting leadership on the issue, Stephen Harper and his Conservative government have an opportunity to begin turning the tides on what has been up until now an abysmal failure.

Since taking the helm, Harper and his party have floundered at the United Nations climate events, with the likes of former environment minister John “Bull in a China Shop” Baird ham-handedly relegating our country to perpetual fossil of the day and year awards.

As someone who has been working in and around these international climate talks, and other such global negotiations, for many years now I have witnessed first hand Canada’s fall from grace. Our small country (population-wise) has historically hit well above its weight in many international forums, with a reputation for neutrality and expert diplomacy. Now, we are called a “petro-state” and a fly in the ointment at such talks.

Up until Harper, Canada has been a international leader on global efforts to battle environmental issues. Former Progressive Conservative Prime Minister Brian Mulroney was an outspoken global leader on reducing CFC’s and his leadership culminated in the Montreal Accord that saw 191 countries agree to phasing out ozone depleting chemicals.

Under Jean Chretien and the Liberals Canada was one of the first countries to sign on to the Kyoto Protocol to reduce global climate change pollution, and that leadership started a domino effect with many countries following our lead. Harper’s lack of performance, and in many cases outright opposition to deal on climate change, is not only being noticed by the international community, it is also starting to be noticed at home.

A poll out late last week finds that a large majority – almost 60 percent – of Canadians agree that climate change should be a top issue for the Harper government. A whopping 76 percent say that Canada should sign on to a new international agreement to limit greenhouse gas emissions.

While I am the first to admit that public opinion polls can fall well short of reality, in this case there is substantial proof at the street-level. Everyday people and not just the media or opinion-makers are wanting Harper to rejuvenate Canada’s international reputation on the issue of climate change.

Canadians to rally for climate this weekend

Look no further than the hundreds of events being planned across the country for a “Defend our Climate, Defend our Communities” day of action being held this coming weekend. Such a show of discontent in the streets and in front of MP’s offices has to have Harper and his minions at least a little worried.

And it is only going to get worse for Harper as more and more extreme weather events pile up week after week on the nightly news. Climate change is no longer a theory. The atmospheric disruption and extreme weather scientists talked about almost 20 years ago when Canada signed on to the Kyoto Protocol is now “the new normal.”

Harper could redeem himself in Warsaw

With these talks starting this week and next in Warsaw, Harper and his new environment minister, Leona Aglukaqq, have an opportunity to redeem themselves. It would be good for our international reputation to do so, not to mention my children’s children who, as it stands today, face a pretty bleak future. And according to public opinion polls, a strong stance on climate by Harper would be good politics.

So what’s stopping him?