The tainted meat scandal that continues to dominate Canadian news headlines has provoked harsh criticism of XL Foods – the company at the centre of the nation’s largest ever meat recall – regulator the Canadian Food Inspection Agency and the Federal Conservative Government. Yet, as humourist and political commentator Rick Mercer astutely underscores in a recent video rant (see below), the most important question the crisis raises relates to the whether it is safe for up to 40% of the country’s beef to be processed by a single plant.

The XL scandal is but the latest and most dramatic wake-up call for Canadians as to the direction successive federal and provincial governments have pushed the Canadian food system – legislating smaller, locally run farms and processors out of business in favour of monolithic, centralized corporate food producers.

In the aftermath of this tainted meat debacle, as our politicians point fingers, attempt to derive lessons and develop policy changes to help prevent this situation from repeating itself, the primary focus needs to be on addressing this overblown corporate food system run amok. We are frequently told small operators can’t safely produce and process our agricultural products, yet the system our governments have imposed on us in their place is clearly proving the opposite is true.

Check out Rick Mercer’s prescient rant on the subject below.

Check out this new 3 min video from Pacific Wild and Damien Gillis, featuring NHL Hall of Fame goaltender Mike Richter sharing his once-in-a-lifetime experience in Canada’s Great Bear Rainforest – threatened by the proposed Enbridge Northern Gateway Pipeline and supertankers. The video is the first in a new series titled, “Voices for an Oil-Free Coast”

The first in a series of new public service announcement videos (see below) from Tanker Free BC – a Vancouver-based organization taking on US energy giant Kinder Morgan’s proposal to twin the Trans Mountain Pipeline to Burnaby – is being launched today. The one-minute video, titled “Some Risks Are Not Worth Taking”, was produced through the volunteer contributions of a group of communications and film industry professionals opposed the plan to bring 400 supertankers a year filled with Tar Sands bitumen to South Coast waters.

I was privileged to be a part of the production, as one of the video’s producers and a board member of Tanker Free BC.

The campaign to draw attention to tanker traffic in Vancouver has recently heated up with the release of the “Oil Spills and Vancouver’s Stanley Park” report by the Wilderness Committee and Tanker Free BC at the first in a series of local town hall meetings. This video launch complements the growing buzz surrounding this important issue.

The video asks viewers to consider the risks posed by the almost one million barrels of tar sands crude oil that would be passing Vancouver’s beaches daily if Kinder Morgan’s expansion plans are approved. Tanker Free BC Campaign Director Sven Biggs said “people all around the inlet are not only standing up to say, no, I’m not okay with that, they are ready to do something about it.”

I look forward to working with this group on future projects for Tanker Free BC; we are already working on the follow-up to this first project as we work to raise awareness about this vital issue.

LUSH Fresh Handmade Cosmetics and environmental organization the Dogwood Initiative have teamed up to produce a video spoofing pipeline builder Enbridge’s recently-launched ad campaign. The embattled company is seeking to sway public opinion in BC in favour of its highly controversial proposed twin pipelines linking the Alberta Tar Sands with the Port of Kitimat on BC’s central coast.

The spoof video, entitled, “A Path to a Canada No One Will Recognize”, riffs on Enbridge’s new campaign and slogan, “It’s more than a pipeline. It’s a path to our future.” The rebuttal video comes from a newly formed partnership between BC-based cosmetics company, LUSH, and the Dogwood Initiative, which has been campaigning against Enbridge for several years.

At a recent forum on mining in Tofino, BC, a First Nations father and daughter from Clayoquot Sound expressed their opposition to a pair of mines proposed by Imperial Metals for their traditional territories – also the location of a world-renowned UNESCO biosphere reserve. John Rampanen, of both the local Tla-o-qui-aht and Ahousaht First Nations, spoke about the impacts of the mines on his family’s traditional way of life and of the need to balance employment with ecological sustainability; his eleven year-old daughter, Kalilah Rampanen, sang a song she wrote about Catface Mountain – the location of a proposed open pit copper mine in the heart of the Clayoquot Sound.

In her song, titled “Chitaapi” (Catface’s indigenous name), the young singer-songwriter warns Canadian mining titan Imperial Metals, “If you wanna mine my mountain, / Well, you’re gonna have to go through me.” Watch John Rampanen’s speech and see his daughter Kalilah perform her song “Chitaapi” here.

30 year-old William Housty’s powerhouse presentation to the National Energy Board’s Enbridge hearings in his community of Bella Bella. William describes the history, language and culture of his people in fascinating detail – and how the proposed Northern Gateway Pipeline and Tar Sands supertankers transiting the waters of his people’s territory would destroy their traditional way of life. A must-watch!

Highlights from this week’s National Energy Board hearings in Bella Bella on the proposed Enbridge Northern Gateway Pipeline and supertankers on BC’s coast. Powerful testimony from three members of the Heiltsuk First Nation, sharing their experiences with the sea. “I’ll never forget it,” said Josh Vickers recounting to the NEB panel a memorable herring fishing trip as a boy. “We were coming back in 40 to 50 foot seas…Our boats were like corks going way up and way down. We couldn’t even see each other – that’s how violent and rough the sea was.”

Watch this video news story from Global TV on this week’s National Energy Board hearings on the proposed Enbridge Northern Gateway Pipeline in Bella Bella – with footage by Damien Giilis. (April 3, 2012)

Watch this new CTV First Story investigation of the debate over the proposes Enbridge Northern Gateway Pipeline, “Crude Awakening.” The 23 min documentary examines the conflicts within coastal communities over the promises of jobs from the pipeline vs. the very real threat of an oil spill disaster. 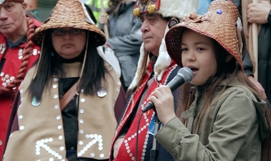 Eleven year-old Ta’Kaiya Blaney of the Sliammon First Nation sings her hit song “Shallow Waters” to some 2,000 people outside the Vancouver Art Gallery. She tells the audience one year ago on this day she was chased from Enbridge’s Vancouver office when she tried to present her song to company officials.