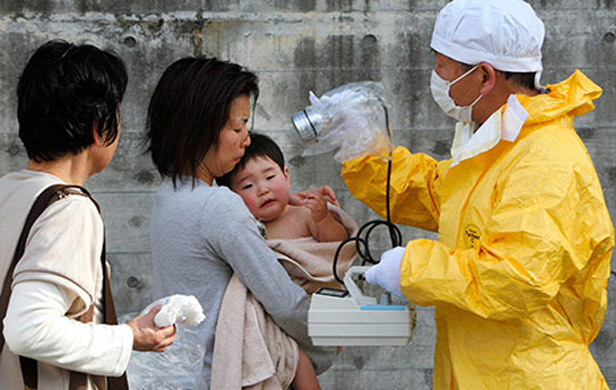 By Yuri Kageyama, The Associated Press

TOMIOKA, Japan – Whenever Kazuhiro Onuki goes home, to his real home that is, the 66-year-old former librarian dons protective gear from head to toe and hangs a dosimeter around his neck.

Grass grows wild in the backyard. The ceiling leaks. Thieves have ransacked the shelves, leaving papers and clothing all over the floor so there is barely room to walk. Mouse dung is scattered like raisins. There is no running water or electricity.

Above all, radiation is everywhere.

It’s difficult to imagine ever living again in Tomioka, a ghost town about 10 kilometres (6 miles) from the former Fukushima Dai-chi nuclear plant. And yet more than three years after meltdowns at the plant forced this community of 16,000 people to flee, Onuki can’t quite make the psychological break to start anew.

His family lived here for four generations. Every time he goes back, he is overcome by emotion. Especially during that brief time in the spring when the cherry blossoms bloom.

“They flower as though nothing has happened,” he said. “They are weeping because all the people have left.”

The Japanese government is pushing ahead with efforts to decontaminate and reopen as much of a 20-kilometre (12-mile) no-go zone around the plant as it can. Authorities declared a tiny corner of the zone safe for living as of April 1, and hope to lift evacuation orders in more areas in the coming months and years.

Former residents have mixed feelings. In their hearts, many want their old lives back. But distrust about the decontamination program runs deep. Will it really be safe? Others among the more than 100,000 displaced have established new lives elsewhere, in the years since the 2011 earthquake and tsunami sent three of Fukushima’s reactors into meltdown.

If the evacuation order is lifted for their area, they will lose a monthly stipend of 100,000 yen ($1,000) they receive from Tokyo Electric Power Co., the owner of the Fukushima plant.

A survey last year found that 16 per cent of Tomioka residents wanted to return, 40 per cent had decided never to return, and 43 per cent were undecided. Two-thirds said they were working before the disaster, but only one-third had jobs at the time of the survey, underlining the challenges to starting over.

Former resident Shigetoshi Suzuki, a friend of Onuki, is outraged the government would even ask such a question: Do you want to go back?

Of course, we all want to return, he said. People like him were effectively forced into retirement, the 65-year-old land surveyor said. If he hadn’t evacuated to a Tokyo suburb with his wife, he would have continued working for his longtime clients.

“It is a ridiculous question,” Suzuki said. “We could have led normal lives. What we have lost can’t be measured in money.”

In protest, he has refused to sign the forms that would allow his property to undergo decontamination.

The government has divided the no-go zone into three areas by radiation level.

The worst areas are marked in pink on official maps and classified as “difficult to return.” They are still enclosed by a barricade.

Yellow designates a “restricted” area, limiting visits to a few hours. No overnight stays are allowed.

The green zones are “in preparations to lift evacuation orders.” They must be decontaminated, which includes scrubbing building surfaces and scraping off the top layer of soil and is being carried out throughout the zones.

Tomioka has all three zones within its boundaries.

The green zones are those where authorities have confirmed radiation exposure can be brought below 20 millisieverts a year.

The long-term goal is to bring annual exposure down to 1 millisievert, or the equivalent of 10 chest X-rays, which was considered the safe level before the disaster, but the government is lifting evacuation orders at higher levels. It says it will monitor the health and exposure of people who move back to such areas.

In the yellow restricted zone, where Sukuki’s and Onuki’s homes lie, a visitor exceeds 1 millisievert in a matter of a few hours.

During a recent visit, Onuki and his wife Michiko walked beneath the pink petals floating from a tunnel of cherry trees, previously a local tourist attraction.

The streets were abandoned, except for a car passing through now and then. The neighbourhood was eerily quiet except for the chirping of the nightingales.

“The prime minister says the accident is under control, but we feel the thing could explode the next minute,” said Michiko Onuki, who ran a ceramic and craft shop out of their Tomioka home. “We would have to live in fear of radiation. This town is dead.”

Both wore oversized white astronaut-like gear, which doesn’t keep out radioactive rays out but helps prevent radioactive material from being brought back, outside the no-go zone. Filtered masks covered half their faces. They discarded the gear when they left, so they wouldn’t bring any radiation back to their Tokyo apartment, which they share with an adult son and daughter.

Junji Oshida, 43, whose family ran an upscale restaurant in Tomioka that specialized in eel, was at first devastated that he lost the traditional sauce for the eel that had been passed down over generations.

He has since opened a new restaurant just outside the zone that caters to nuclear cleanup workers. He recreated the sauce and serves pork, which is cheaper than eel. He lives apart from his wife and sons, who are in a Tokyo suburb.

“There is no sense in looking back,” Oshida said, still wearing the eel restaurant’s emblem on his shirt.

Older residents can’t give up so easily, even those who will never be able to return — like Tomioka city assemblyman Seijun Ando, whose home lies in the most irradiated, pink zone.

Ando, 59, said that dividing Tomioka by radiation levels has pitted one group of residents against another, feeding resentment among some. One idea he has is to bring residents from various towns in the no-go zone together to start a new community in another, less radiated part of Fukushima — a place he described as “for our grandchildren and great-grandchildren.”

“I can survive anywhere, although I had a plan for my life that was destroyed from its very roots,” said Ando, tears welling up in his eyes. “Don’t get me wrong. I’m not suffering. I’m just worried for Tomioka.”