Of course Donald Trump could beat Hillary in November. I think he will, but before going further, let me say that this would be any enormous worldwide tragedy and we must pray that there is a God and He will save us.

Back to the election.

Trump is in a lot better shape than the pundits give him credit for and he couldn’t have done it without a hell of a lot of help from Hillary.

She has been in the race too long and it’s showing. She’s displaying her temper and a lack of judgment – not to mention her recent health issues – things that everyone has but no-no’s when you’re running for president.

But let’s get to the underlying reason Trump is doing so well.

The media and pollsters have been caught out making outdated assumptions and asking irrelevant questions. They’re looking at this contest through the prism of elections past and are still declaring their choice of issues and missing the main one. It’s easier that way – research and thinking take up booze time.

It’s an entirely new ballgame and I refer back to articles I’ve done here and elsewhere saying that society as we have come to know it is mortally wounded and it’s impossible to predict just what it’s going to look like a decade from now.

The first major clue for me anyway, was on the environmental front. Environmentalism was always a leftwing issue and often the loony left at that.

With the arrival of global warming, it suddenly occurred to the masses that there were troubles in River City and that maybe those grubby long-hairs marching with the placards had something after all. When science, almost to a person, backed up the demonstrators of yore and the evidence grew almost daily, suddenly the middle class caught on and development no longer trumped all other considerations.

The secret, always suspected, was out of the bag and we learned that the Establishment had been lying for a very long time and that the public had naively come to uncritically accept what they were told by their “betters”. Once it became obvious with the climate issue that all these good corporate citizens, our politicians and community leaders had not been telling the truth, it was a very short step to assuming that anything they said was suspect. This manifested itself in movements like Occupy Wall Street by young people and outrage increasing through social media.

The Mainstream Media had no choice but get into the Establishment life-boat. The world over, the rich increased the gap between themselves and the poor and as that gap widened, carrying more and more power with it, the resentment of the poor became stronger and stronger. 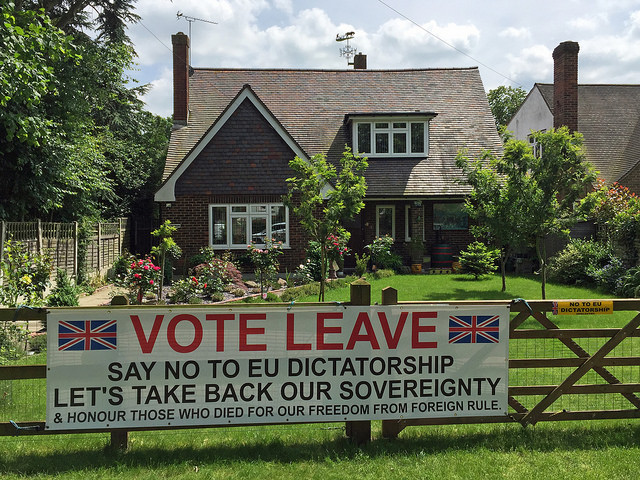 The latest and best example of this was Brexit in Britain, England especially. I wrote an article on the subject that that the main issue was being obscured by the media and that the underlying cause of discontent simply wasn’t being recognized.

Now there are lots of reasons that Brexit went as it did and no doubt all made a contribution. In my view, however, there was one principal cause and one sub-cause that really did the EU in.

The same “pissed off mood” existed in Britain as elsewhere and those who were that way and voted “Leave” probably wouldn’t recognize that. “Real Reasons” are hard to determine, especially if you don’t try.

I offer as an hypothesis that the “Leave” vote was that deep down feeling of resentment of being fooled, aggravated by more recent “insults”, as many people felt that they had been cheated and subjected to a “bait and switch” by those set in authority over them.

If you look back at the process you will see that the first referendum in 1975 simply wanted to know if Britain, having finally been accepted by de Gaulle wished to stay in the common market. The operative word throughout was “market”. This was not portrayed as approval of any kind of a political union and had it been, it clearly would have failed. To Britain, an economic deal looked like a pretty good idea and they voted for it by a substantial margin.

It was under the presidency of Jacques Delors, an unelected bureaucrat, from 1986 till 1994. that the Common Market inexorably moved to a political union. Delors was detested by many in Britain.

It is a long history and I don’t wish to oversimplify it but just point out that by the time of the Brexit vote on June 23, 2016, the same massive irritation with the establishment that we saw in North America was also present in Britain and a substantial part of that irritation came from Jacques Delors and a political union they neither voted for but in fact opposed.

For many, the Brexit vote was a chance to rectify what they saw as a “bait and switch” scam by the elite that started off as a marketplace and ended up in a huge, meddlesome bureaucracy in Brussels.

Public ready for a brawl

Enter the US election with the same festering distrust of the establishment. The pundits and the pollsters, stuck in a time warp, are overlooking reality and the “garbage in, garbage out” rule comes into play.

Much of the public, both on the right and on the left, is thoroughly pissed at where their social, economic, and political masters have taken them and they aren’t much interested in debates under the Marquess of Queensbury rules, seen as the Elite’s rules, preferring a brawl if necessary.

This has given Trump a big advantage. As long as he hammers at Clinton, the dissident voters are happy and don’t much care about the truth or fairness of the attack.

In fact, the more outrageous he is, the more popular he becomes. Many wonder how Trump can get away with it and it’s because a large part of the American public is quite willing to let him get away with it if it gets the job done and turfs out what they see as the enemy.

Trump fights by own rules

In the meantime, Hillary Clinton is playing right into Trumps hands. The more she calls his supporters names the more they support him. It stands to reason that when she calls Trump bad names, they support him if only because Clinton represents all of the things they’re mad at and the more bumps on the nose of the privileged, the better.

It is not all Hillary’s fault of course. I doubt there are many politicians of consequence prepared to fight a man like Trump because he doesn’t fight by the old rules and they don’t know how to fight by the new ones.

Paradoxically, Trump could probably buy out the Clintons 100 times or maybe 1000, yet the Clintons are seen as the ones who have taken advantage of the system and enriched themselves at the expense of the least well off. That is a base canard but the reality is that this is how it appears to disaffected voters, and appearances are as good as facts in politics.

I will now assure the victory of Hillary Clinton by making a famous Mair political prediction – which will, as always, be wrong – and say that Donald Trump will succeed President Obama next January…and may God have mercy on all of us if for once I’m right.

28 thoughts on “Why Donald Trump will probably beat Hillary Clinton”