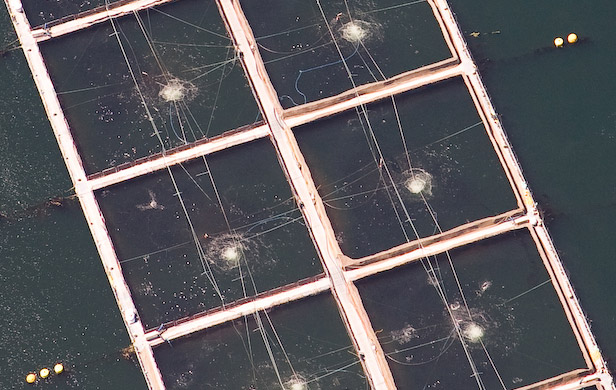 The discovery of Heart and Skeletal Muscle Inflammation (HSMI) in BC’s farmed salmon has been couched in cautious and evasive terms by the industry and government. HSMI “might” have been found. It’s “yet another piece in the complex puzzle of salmon health on the Pacific Coast,” noted the former Minister of Fisheries, Hunter Tootoo.

[quote]The findings announced by the SSHI [Strategic Salmon Health Initiative] regarding a potential diagnosis of Heart and Skeletal Muscle Inflammation in fish from one Atlantic salmon farm in B.C. are important. However, there is no consensus amongst the scientific community about the finding as the fish sampled in this farm showed no clinical signs of the disease.[/quote]

But the finding of HSMI is extremely significant. Understanding why requires some additional information.

HSMI is related to piscine reovirus (PRV) as HIV (human immunodeficiency virus) is related to AIDS (acquired immune deficiency syndrome). Salmon don’t get HSMI unless they have PRV. Just as HIV is asymptomatic, PRV is also asymptomatic — which explains why it is not technically called a “disease”. In its early stages, HSMI may also exhibit no “clinical signs of disease”. But it can be fatal.

HSMI is the symptomatic stage of PRV. As the degree of PRV infection increases, heart muscles are damaged, organs are impaired and muscles are compromised. Eventually fish are so debilitated by a weakened heart, malfunctioning organs and inflamed muscles that they are unable to swim.

HSMI is now the third largest cause of mortality for salmon farming in Norway. But this is the industry’s problem. The real environmental concern is the spread of PRV and HSMI to wild salmon.

PRV is extremely infectious. First identified in Norway in 1999, it spread quickly to 417 farms, and in 2010 was identified by Norwegian scientists as the cause of HSMI. On July 9, 2010, the scientific journal, PLOS One, published “Heart and Skeletal Muscle Inflammation of Farmed Salmon is Associated with Infection with Novel Reovirus” (Gustavo Palacios, W. Ian Lipkin, et al.), linking HSMI with this “novel” piscine reovirus. PRV eventually spread to BC, probably by infected eggs imported to salmon farms from Norway.

As early as 2008 reports from BC’s veterinarian pathology lab showed “congestion and hemorrhage in the stratum compactum of the heart” in farmed salmon, symptoms consistent with HSMI. Estimates are that most farmed salmon in BC now have PRV — not a serious problem if their fish don’t die of HSMI.

But the situation is very different for wild salmon. The PRV imported from Norway is now thought to be spreading to BC’s wild fish. As early as 2011, Dr. Kristi Miller found PRV in Fraser River sockeye. A year later, 13 of 15 Cultus Lake cutthroat trout were found with PRV. Norwegian scientists are of the opinion that HSMI may never be discovered in wild salmon because the fish would be too debilitated by the disease to survive predators and the challenging conditions of oceans and rivers.

The combination of PRV’s ubiquitous presence in salmon farms, its extreme virulence, and the fatal symptoms of HSMI could have devastating consequences for wild salmon populations.