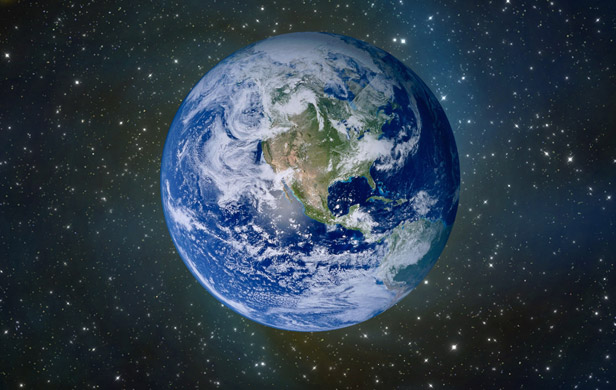 April is Earth Month, and April 22 Earth Day. We should really celebrate our small blue planet and all it provides every day, but recent events give us particular cause to reflect on our home and how we’re treating it.

Through an amazingly ordered combination of factors, this spinning ball of earth, air, fire and water – with its hydrological, carbon, nitrogen and rock cycles, biological diversity and ideal distance from the sun – provides perfect conditions for human life to flourish. But with our vast and rapidly increasing numbers, breakneck technological advances, profligate use of resources and lack of concern for where we dump our wastes, we’re upsetting the balance.

We’re a relatively new species, but we’re altering the geological properties of Earth to the extent that many scientists refer to this epoch as the Anthropocene – from the Greek anthropos meaning “human” and kainos meaning “recent”.

When Malaysian Airlines Flight 370 disappeared on March 8, crews in planes and boats set out to search the Indian Ocean. Debris sightings raised hopes that the crash site was located, but they turned out to be endless streams of garbage that humans have been dumping into the oceans for ages – plastic bottles and bags, fishing gear, household wastes, cigarette butts, detritus from shipping containers, even bits of space shuttle rocket boosters.

We now have massive swirling garbage patches in our oceans, and thousands of birds and fish from remote seas turning up dead, their bellies full of plastic and flotsam.

We’re also upsetting the delicate carbon cycle of the planet and its atmosphere, mostly through wasteful burning of fossil fuels. This, in turn, is shifting other natural processes, including the ways water circulates around the globe and climate and weather are regulated.

For a disturbing illustration of the damage we’ve done and how much more we’ll do unless we change our ways, we need only look to the recent installment of the Intergovernmental Panel on Climate Change’s Fifth Assessment Report. Findings show we’re already experiencing the ever-increasing impacts of global warming: ice caps and Arctic sea ice melting and collapsing; more extreme weather-related events like droughts and floods; dying corals; stressed water supplies; rising, increasingly acidic oceans; and fish and other animals migrating with some going extinct. Unless we act quickly, our food and water supplies, critical infrastructure, security, health, economies and communities will face ever-escalating risks, leading to increased human displacement, migration and violent conflict.

Some argue we must choose between “growing” the economy and protecting the planet. In response, the report states:

That’s if we do little or nothing – which is not a viable option. We must reduce our individual impacts, but more importantly, we must tell industry and governments at all levels that we’ll no longer support the fouling of our planet and the madness of putting short-term economic growth ahead of protecting everything that keeps us alive and healthy.

The answer is blowing in the wind

We elect governments to act in our best interests, not to promote polluting industries at the expense of human health and long-term prosperity. One of our species’ unique abilities is foresight, the capacity to look ahead to avoid dangers and exploit opportunity. It’s time for our leaders to be visionary and steer away from hazards while taking the enormous opportunities offered by renewable energy sources. As I said in last week’s column, climate change is serious, and “Confronting it will take a radical change in the way we produce and consume energy – another industrial revolution, this time for clean energy, conservation and efficiency.”

Meeting this challenge, through reducing greenhouse gas emissions and adapting to changes we can no longer prevent, will offer myriad side benefits, from better health and lower health-care costs to greater economic opportunities through cleaner and longer-lasting technologies.

There’s no excuse to keep on destroying our home. If we are to observe Earth Day and Earth Month, let’s make it a time to celebrate, not to despair.