The City of Vancouver passed a motion this month demanding that Kinder Morgan pipeline company carry full liability to cover the costs of an oil spill in our Vancouver Harbour. The request is just common sense but demonstrated very uncommon courage in the public political realm.

So, how much liability would Kinder Morgan – the now notorious ex-Enron billionaires from Texas, who bought BC Gas and flipped it for the pipelines – need to carry to indemnify our city from the ravages of an oil spill?

Well, for starters, some $40 billion, as I explain below. But let’s keep in mind:

Economic costs of an oil spill

The Aframax tankers now using Vancouver Harbour carry up to 700,000 barrels of bitumen, the deadliest crude oil on Earth. To estimate the costs of responding to such a spill, one must examine comparable costs for similar accidents. One method uses the historic “costs/barrel” for responding to oil spills.

The Exxon Valdez spilled 270,000 barrels, about one-third of an Aframax tanker. The Alaska tourism industry lost 26,000 jobs and $2.4 billion immediately – and another $2.8 billion over the next decade. Total loss for tourism alone: $5.2 billion. Ouch. 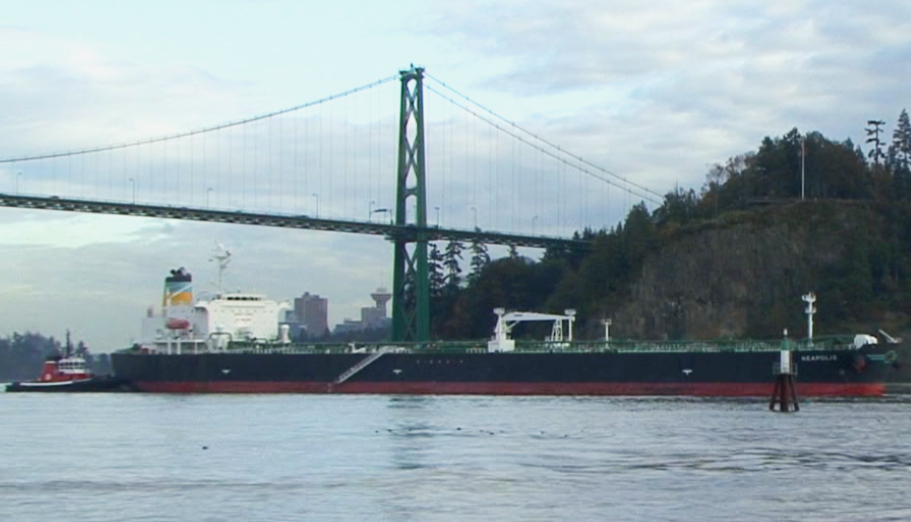 British Petroleum set aside $20 billion for clean up and compensation in the Gulf of Mexico, but Credit Suisse estimated total BP liabilities of $37 billion, just for cleanup and injury claims.

So, who pays this cost? Exxon has been in and out of court for 23 years over the Exxon Valdez spill, and still hasn’t paid its liability claims. BP is fighting injury claims, but in Vancouver Harbour there may be no such company that would even accept liability. The oil companies – Shell, Syncrude, Sinopec – and pipeline company Kinder Morgan have already indemnified themselves and would decline liability once the oil is on a ship. The ship owner has liability by Canadian marine law, but these days oil tankers are owned by obscure numbered companies with few assets, in slippery jurisdictions, where they can and literally do disappear overnight in the case of serious accidents.

The response costs would fall to Canadians – municipalities, the Province, the Federal government – that is, to the people. Imagine a $40 billion Canadian bill to mop up 10% of a marine and economic disaster, while our schools and social programs disintegrate.

Consider a 500,000-barrel bitumen oil spill in Burrard Inlet, 70% of an Aframax tanker. Globally, there has been an oil spill of this size about every 18 months worldwide for the last 40 years.

Bitumen (tar from tar sands) is a particularly dense, toxic version of crude oil. It has to be mixed with some thinner petroleum product to even move th 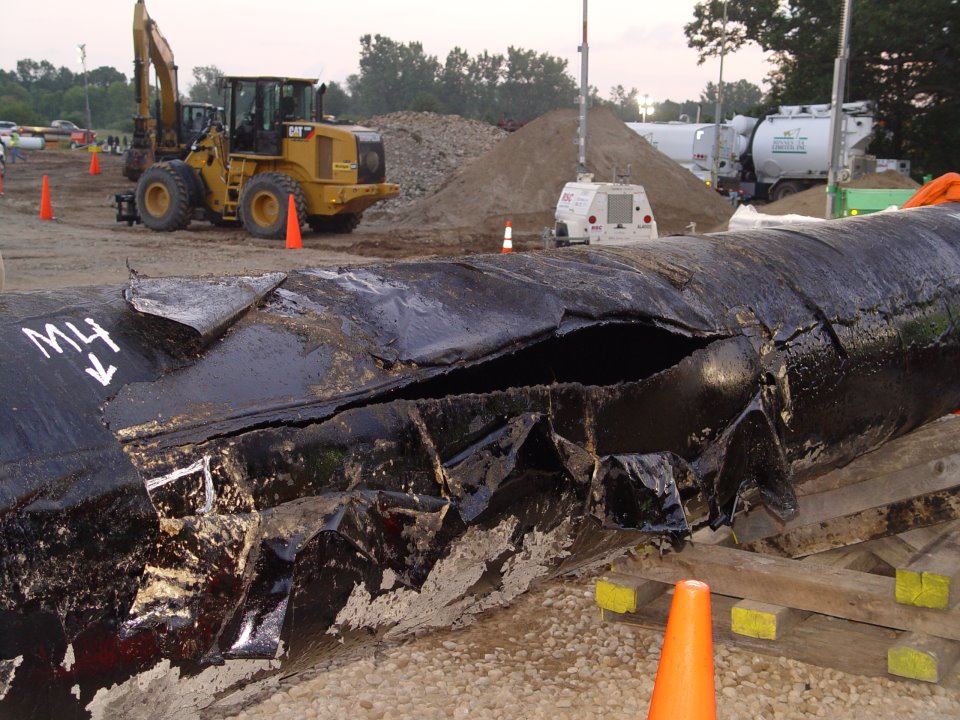 rough a pipeline, whereby the pipeline industry calls it “dilbit” – for “diluted bitumen.” Something like arsenic diluted with vinyl chloride.

In July 2010, a 30-inch bitumen pipeline owned by Enbridge Energy – that other pipeline outfit angling for the BC coast – burst, spilling 20,000 barrels of tar sands bitumen into a tributary of the Kalamazoo River in Michigan. The challenges of dealing with the heavy, sinking bitumen shocked the U.S. Environmental Protection Agency, which Mitchell Anderson wrote about in the Tyee.

Bitumen, diluted with solvents such as condensate or naphtha, separates in the marine environment. Volatile gases – toluene and the carcinogenic benzene – rise into the air, causing headaches, nausea, dizziness, coughing, and fatigue among the local population. One may fairly assume all other animals that breathe air experience similar symptoms.

After the Kalamazoo River spill, the toxic fumes remained for weeks and could be smelled up to 50 kilometres away. A major Aframax spill in Burrard Inlet – 25-times larger than in Michigan – would likely require evacuations in the lower BC mainland and islands. Clean up crews would battle toxic fumes as they watched the bitumen sink below their skimmers.

Bitumen contains sulphur, paraffins, asphaltics, benzenes, and other toxic compounds. Animals and plants are suffocated and poisoned. The die-off starts at the foundation of the food chain, obliterating the vital mudflat biofilm – the bacteria, diatoms, and mucopolysaccharides that provide a high-energy food source for shorebirds in Burrard Inlet and Georgia Strait. As the bitumen moves with wind and tides, it kills all bottom life, mixes with the intertidal sediments, and kills shellfish, ocean plants, fin fish, and marine mammals.

On top of this, the polycyclic aromatic hydrocarbons (“PAHs”) in bitumen, dissolve in the water. Two years after the Michigan spill, 30 miles of the Kalamazoo River remained closed to fishing, swimming, or even wading in the water.

After a bitumen spill in Burrard Inlet, the toxins would contaminate the entire marine ecosystem from Seattle to Campbell River, and beyond. Most of this damage could not be “cleaned up” at any price

Show me the money

Cleanup: According to the US EPA, historic U.S. crude oil cleanup costs have been about $80/gallon ($3,400 per barrel). The added problems with tar sands bitumen – toxic gas, sinking sludge, and soluble hydrocarbons – push costs up. The Kalamazoo River spill by Enbridge cost 10 times the traditional crude oil clean up costs – about $35,000 per barrel. Comparatively, the cleanup response to a 500,000-barrel bitumen spill in Burrard Inlet would be:  $ 17 billion

Tourism losses: “Tourism is dead,” said Charlotte Randolph, president of the Lafourche Parish in Louisiana, after the Gulf Oil spill. “We’re dying a slow death.” Oxford Economics estimated the Gulf region’s tourism industry would lose $7.6 to $22.7 billion over 3 years. Tourism dropped by 35 percent in some Gulf regions. Economist Sean Snaith, from the Institute for Economic Competitiveness in Florida, estimated that Florida alone would lose $11 billion in business activity job losses. BC brings in $14 billion annually in tourism, and we could lose half of this for 2-4 years, so added to the clean-up costs would be the tourism loss to BC over several years, on the order of: $ 20 billion

Fishing: “I’ve been fishing in BC since 1973,” says B.C. fisherman Ron Fowler, a Pacific Salmon Commissioner and Director of the Area-F Trollers Association. “If we get an oil spill anywhere in these waters, it would wipe out every fishery we have, shellfish, salmon, herring, and the plankton that they feed on. An oil spill would move with the wind and tides and devastate the intertidal zones.”

The BC fishing industry wholesale value is about $1.2 billion per year. An oil spill on the coast could destroy a large portion of this for 3-4 years and some shoreline intertidal fisheries for a decade or more. A 40% fisheries loss in the first year could be expected, with recovery to perhaps 10% loss within five years. The potential fisheries loss over several years is in the range of: $ 1 billion

Health costs: Oil companies, public, and private workers during the Exxon Valdez spill described health effects that forced them from the area and into hospitals. Some first responders in Alaska still suffer from the toxic intake. Bitumen is worse. In Michigan, the volatile benzene and toluene caused nausea, dizziness, headaches, coughing, and fatigue to some 60% of the local population for weeks after the spill. The health department encouraged an evacuation within a mile of the river. As with other oil spills, there will be a spike of cancer and other diseases. A 500,000-barrel bitumen spill in Burrard Inlet would likely cause a mass evacuation and severe health impact for over a million people. The costs could easily reach:$ 1 billion

Lost Time: The lost time for families, students, workers, business owners, and  others in the lower mainland and up to 50 kilometers way, likely farther up the Fraser River past Fort Langley, and south past Whiterock, would be massive. Given our normal tides and winds, the crude oil would be in Nanaimo, Sechelt, and the Southern Gulf Islands within a few days. The lost time for hundreds of coastal communities would likely reach at least millions of person-hours at a cost of another: $ 1 billion

Port losses: An oil spill would disrupt Port of Vancouver shipping business. The Port contributes over $2 billion in direct revenue per year and over $4 billion in direct economic output. The port generates some 30,000 jobs (~ $1 billion annual wages & salaries). Shipping could be virtually stopped for months and disrupted for several years, so the costs would be on the order of: $ 1 billion

So there it is, in round figures: a $41 billion price tag for an oil spill, with no one to accept liability except a renegade shipping company in Somalia or the Cayman Islands.

Vancouver and BC brand value: The “Beautiful BC” and “greenest city” reputations would be lost. How much is that worth? Billions more. Stanley Park would be devastated. How do we put a price tag on that? The lost reputation and destroyed ecosystems – if we could even place a dollar-cost on these losses – would double the $40 billion direct costs to make the loss more like $80 billion.

This is the aggregate risk that the Vancouver region must accept if it wants to be the Tar Sands Oil Port in exchange for some tugboat jobs, port fees, consulting gigs, and payoffs.

All oil ports have oil spills. Most oil spilled into the world’s bays, harbours, and marine environments is “normal spillage,” acknowledged by the industry as a routine “expense,” which they write off as a tax deduction.

Oil terminal workers have admitted that they spill oil virtually every time they load a tanker. Every time. Normal spillage includes routine leaks and spills along pipelines and at refineries, tank farms, and terminals. This constant drain of heavy hydrocarbons into the marine environment kills the intertidal life and other marine species. Try going east of Second Narrows, near Kinder Morgan’s Westridge Terminal and find a healthy clam or crab.

This Inlet once fed the Tsleil-Waututh, Squamish, Musqueam, and Tsawwassen people, who retain rights to this unceded territory. “When the tide is out, our table was set,” recalls Rueben George, Sundance Chief of the Tsleil-Waututh, the indigenous People of the Inlet. Second narrows, the traditional waters of the Tsleil-Waututh, is a sacred place that provided food for many generations. That food resource is already virtually eradicated from the normal spillage from the oil refinery and terminal on Burrard Inlet. “We’ve had enough of seeing our waters destroyed,” says Rueben George. “Second Narrows is sacred to us. Our creation stories go back to this channel of water.”

What price would one place on this? What price for the obliterated natural livelihood of indigenous people, our regional heritage, our marine and intertidal ecosystems, our coastal economy, and our community identity and pride in the sea? There is no way to protect these values and real wealth of this region if Vancouver becomes the tar sands oil port. The only way Kinder Morgan can indemnify the land, water, creatures, plants, and people of Burrard Inlet is to return our pipelines and our public policy to this region and to its people.

20 thoughts on “The Cost of an Oil Spill in Burrard Inlet: $40 Billion…For Starters”