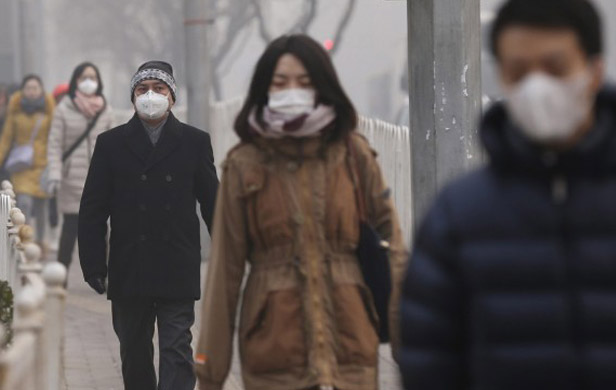 BEIJING – When the air gets really bad, Beijing says it has an emergency plan to yank half the city’s cars off the road. The only problem is: It may be difficult to ever set that plan in motion.

It wasn’t triggered in January, when the city recorded extremely poisonous air pollution. And not this week, when pollution was expected to continue for several days at hazardous levels. A rare alert issued Friday was an “orange” one — the second-highest in the four levels of urgency — prompting health advisories and bans on barbeques, fireworks and demolition work, but no order to pull cars from the streets.

“Yesterday, I thought it was bad enough when I went out to eat. But this morning I was hacking,” a Beijing pedestrian who gave her name as Li said Friday, as a thick haze shrouded the city.

Still, the government did not issue the red alert. Beijing’s alert system requires a forecast of three days in a row of severe pollution for the highest level. Days of extreme pollution or polluted skies that are expected to clear in less than three days do not trigger the most stringent measures.

A period of pollution in January that saw density readings of PM 2.5 particles exceeding 500 micrograms per cubic meter prompted only the mildest, blue-level alert. That density is about 20 times as high as the 25 micrograms considered safe by the World Health Organization. PM refers to “particulate matter,” a mixture of extremely small particles and liquid droplets, the size of which is linked to their potential for causing health problems.

The measures that went into effect Friday also ask members of the public to use public transportation and to turn off their cars rather than let them run idle, as well as call for water sprinkling on the street and dust-control measures at building sites. The most stringent level, red, would order half of Beijing’s 5 million cars off the road — based on the last digit of their license plate.

Ma Jun, of the non-governmental Institute of Public and Environmental Affairs in Beijing, said that accurately forecasting three days of heavy pollution is technically difficult.

But in any case, he said, the government is reluctant to adopt the most disruptive measures, because it would be nearly impossible to notify all drivers of the rules and to adequately boost the capacity of public transportation to accommodate the extra passengers.

“When the alert is at a low level, the measures are not effective, but those for the high-level alert are not feasible,” Ma said. “The government is reluctant to raise the alert level.”

However, Ma credited the government with becoming more open in recent months about air pollution levels, and noted that many people receive real-time government updates about Beijing’s air quality on their mobile phones, so that they can take protective measures.