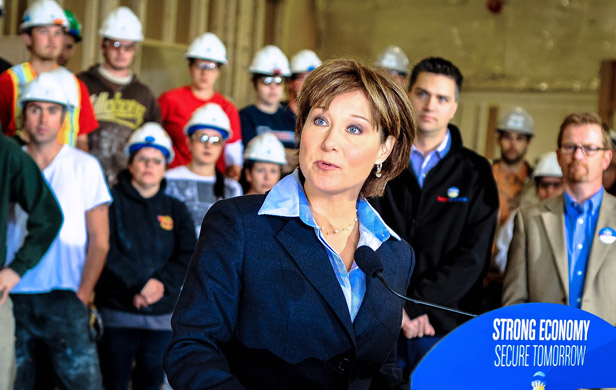 Many people are ready for a change in Victoria. Christy Clark is one of the least popular candidates for premier in BC history and, after 16 years of scandal-filled rule, her Liberal Party has tried British Columbians’ patience to the extreme. Yet every day on social media, I run across a familiar refrain: “Better than going back to the NDP’s lost decade.” Clearly, that narrative is so deeply embedded that it threatens to keep the NDP out of government yet again.

But memory, science now teaches us, is unreliable. It can play tricks on us. In order to make an informed decision on May 9, voters need to know the hard facts about BC’s economic history – a straight up comparison between the two credible options in this election. A serious examination of the best available data on key metrics reveals that British Columbians have far more to fear from another four years of the Christy Clark Liberals running our economy than they do taking a chance on John Horgan and the NDP.

For a government that claims to “balance budgets”, it’s astounding to consider how much debt the Liberals have racked up on our behalf. While the NDP grew the provincial debt by roughly $17 Billion over their decade in power, the Liberals had added $33 Billion by the end of the last fiscal year. But that’s just the tip of the iceberg. They’ve saddled BC Hydro with $24 Billion in debt and “deferrals”, plus another $58 Billion in unnecessary, sweetheart private power contracts, on which we lose over a billion dollars every year. This also explains the almost doubling of your power bills during their reign. And that’s before the unnecessary Site C Dam, which won’t be paid off until at least 2094! Here’s what UBC’s Dr. Karen Bakker had to say on the subject after she and a team of researchers published their damning report on Site C’s economics:

[quote]Site C will be 100 per cent surplus when it’s finished in 2024. That surplus energy will have to be sold, will have to be exported, from the province and B.C. Hydro’s own numbers show that those exports will occur at a high loss. Our figures show that loss will be about $800 million and could be as high as $2 billion.[/quote]

That’s just if the Liberal Government manages to keep to its $9 Billion budget for the project – hard to conceive of when their top 5 capital projects to date have doubled in cost, going over budget by a whopping $3.3 Billion (compare that with the NDP’s fast ferries, which went over by $250 million).

All this fiscal mismanagement has taken a huge toll. Add up our official provincial debt and liabilities ($84.3 Billion, according to the Comptroller General), then factor in hidden taxpayer obligations from private contracts for electricity and infrastructure building ($101 Billion, according to the Auditor General) and you get $185.7 Billion of real debt for BC, up from $39 Billion when the Liberals took over from the NDP. That’s about $40,000 for every man, woman and child in the province – double the per capita debt of the next closest province, Ontario, even when you factor in their own “additional taxpayer obligations”.

The BC Liberals also sold off one strategically vital and financially healthy crown corporation, BC Rail, and ran two others – ICBC and Hydro – into the ground, taking half billion to a billion dollar annual profits and turning them into equally large deficits.

The inputs into BC’s tax coffers are declining in other places as well. For instance, huge royalty giveaways to the gas sector have sucked billions out of our provincial revenues. As renowned geologist and shale gas expert David Hughes explains, “[BC’s gas] production has doubled since 2005 whereas revenue is down 87%”. The same thing can be said for stumpage fees from logging, which have sunk to pathetic levels over the past decade.

Given all this, the only way the Liberals can lay any claim to “balanced budgets” is by shunting debt into other accounts and onto the backs of ratepayers and crown corporations, while cutting services to the public. The effects of these debts may not be immediately visible – but they are guaranteed to be borne by young British Columbians and future generations for decades to come. BC’s credit rating is now under threat due to BC Hydro’s shaky position, which means servicing that growing debt is going to become even more costly going forward.

One of the most telling moments during the televised leaders’ debate was this exchange between moderator Jennifer Burke and Christy Clark:

Clark went on to her mantra that she’s created 226,000 jobs. Even if it were true that British Columbians don’t care about anything else, or that jobs are a panacea for all BC’s socioeconomic ills, how true is her claim that NDP were so much worse for jobs than her government is?

The NDP inherited a high unemployment rate of 10% from the Socreds and saw that decline fairly steadily to 7.2 % in 2000 (BC’s lowest rate since the early 80’s) – the last full year before they left office. Things got worse early on under the Campbell Liberals, but that can be partly attributed to the tech bust and other factors beyond their control.

Throughout Christy Clark’s tenure, BC’s unemployment rate has come down from 7.5% to around 6% today – on the surface, marginally better than then NDP in the late 90’s. But let’s also not forget that Christy came to power in 2011 on the heels of the biggest economic collapse since the Great Depression – a natural period for job growth (the NDP faced their own challenges from the global economy int he 90’s). So how much credit can Christy take for these jobs? According to a group of leading BC economists, very little. “I would say the [increase in jobs] is mainly due to market forces,” said Helmut Pastrick, chief economist of Central 1 Credit Union.

It’s also important to consider the specific nature of the jobs we’re creating and losing. For instance, most of the new jobs under Christy’s reign have come in urban centres. “The rest of the economic regions in B.C.— the interior, the north, they are actually losing jobs, and that is worrisome,” says Canadian Centre for Policy Alternatives’ economist Iglika Ivanova.

Rural British Columbians know all too well the harsh realities of the BC Liberal job record. On their watch we’ve gone from 100,000 jobs in forestry, wood product manufacturing and pulp and paper to just 60,000 – largely due to poor government management, mill closures and raw log exports.  And what of the 100,000 short term and 60,000 longterm LNG jobs Clark won the last election by promising? A handful of short term jobs on projects since shelved. Zero plants or longterm jobs on the horizon, as the bottom has predictably fallen out of the Asian LNG market.

Finally, many of the jobs Clark has created are low-wage, part-time, short-term, and without benefits. Here’s what a recent report from The Vancouver Sun had to say on the topic:

[quote]…an analysis of the federal labour force survey shows the share of part-time jobs has steadily grown here, from 15 per cent in 1976 to nearly a quarter of all jobs in 2016.

Adds UBC Sauder School of Business Professor Mark Thompson, “They overlook the fact that we lag the rest of the country in full-time jobs and that the rate of wage increases has been amongst the worst in Canada.”

Even if Christy Clark was telling the truth about her job creation record, what good is a job if you can’t afford your rent and bills? This is why affordability has become the biggest issue of this election. When Christy’s predecessor Gordon Campbell took office, the average price of a detached home in Greater Vancouver was about $369,000. That peaked last year at over $1.8 million! And Christy owns this one much more than Campbell. Since her Johnny-come-lately foreign buyers’ tax, the market for detached homes has cooled a little, but now it’s condos on the rise. The most dramatic increases have happened on Christy’s watch, as a Global News story from a year ago explained:

[quote]…[The Real Estate Board of Vancouver’s] data shows the average price of a single-family detached home in the Greater Vancouver area has increased as much in the past five months as it did from 1981 to 2005.

At the pocketbook level, what used to be among North America’s most affordable power bills have almost doubled since the Liberals came to power. ICBC premiums are headed in the same direction . In 2001, there were no bridge tolls in the Lower Mainland; today, people are being nickle-and-dimed to death, or driving extra distances to avoid tolled routes. Childcare costs have skyrocketed – which has even the Board of Trade raising alarms over the negative effect on our economy. Meanwhile, for BC’s least advantaged, disability and welfare rates have barely moved.

Time after time, we hear stories of bright tech employees turning down jobs in Vancouver or young, talented professionals fleeing the city for rural communities or other provinces. We don’t yet have a grasp on the real cost of this brain drain of the Liberals’ making.

One financial metric is way up under the Liberals’ reign: corporate donations to the Liberal Party. If we judge her on this factor alone, Christy Clark is a bona-fide financial wizard. But by many other measures, it’s high time British Columbians came to realize they have far less to fear with the NDP than they’ve been told and a whole lot to lose by sticking with the BC Liberals.