In 2001 when we decided to purchase property in Lillooet—a long held dream—we had no idea there was an arsenic problem in Lillooet’s water supply–until 2009. Local exposure is unquantifiable (few test(s) or results) until 2006. The MAC (maximum allowable concentration) was .0250 mg/L, set from wells inception: Conway #1 in 1994, Conway #2 in 1995, Rec Centre #1 in 1996. Then in 2006 the MAC was lowered to .010 mg/L. IHA explained short term exposure over MAC’s was OK by them (but they do not live here). Note too, that all four wells (one defunct since 2009) are located within the 50’ exclusion zone for rail lines, where sprays may be used to reduce plant growth, with possible discharge of diesel oil, brake fluid etc.

The LRA pressured the IHA to do an ongoing testing regime and publish them on the district’s website–available online. Note the wells are due to start up mid-April, but may be operating—we can’t be sure as the system is automated. According to recent records from the DOL the arsenic levels are higher than ever: March 01/11 Conway #2 at .037 mg/L, and March 15/11 Conway #2 at .033 mg/L. Excellent reasons to abandon our wells—rather than abandon our creeks, which has been DoL policy since 2007.
Living in Lillooet only part time for 7 out of 10 years to date, and drinking only RO water, until 2009 I was cooking with tap water—which causes a concentration of the poisonous effects (eg. cooking rice). About 15 months ago, I had a hair analysis done (alternative medicine); the result was .023 for arsenic, then after drinking and cooking with only Reverse Osmosis water for over a year, the follow up test read .016. Arsenic absorbs into our garden produce and our skin so it seems unavoidable.

The graph below shows the well arsenic test results for 2010 from District/IHA; you can see the levels over the maximum allowable are of concern to the LRA especially since the two Conway Park wells deliver arsenic water undiluted into the mains. This hopefully answers questions posed in the BRLN March 30/11 and stresses the importance of being involved with community issues. 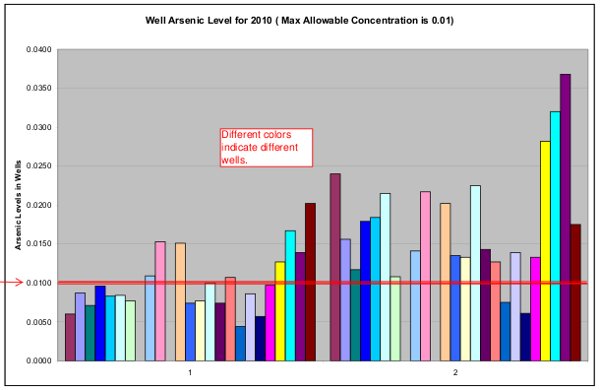