The BC government is worried it can’t control the way fracking and liquefied natural gas (LNG) are being criticized through social media, documents obtained through a Freedom of Information request reveal.

As a result, the Liberal administration fears losing the “social licence” required to advance its LNG strategy – the core policy of its recent election platform and economic vision.

The June, 2014 briefing note (view full document here) was dug up by Propeller Strategy, a non-profit group with a focus on environmental and public interest issues in BC. Prepared by staff for Minister of Natural Gas Development Rich Coleman, it compares criticism of fracking with the kind of fake news and tweets that surrounded the Boston Marathon Bombing several years ago.

[quote]Allowing this kind of “framing” to occur is not in the public interest as social licence is eroded. [/quote] 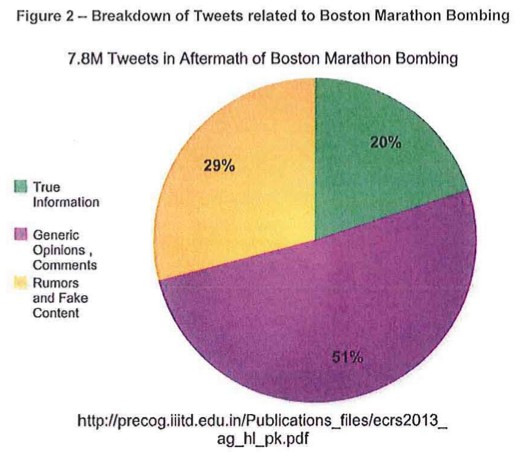 The document uses the Boston Marathon Bombing as an example of how quickly misinformation can spread through sites like twitter and facebook. In that particular incident, thousands of false tweets muddied the public’s initial understanding of the situation.

“Part of it is people wanting to be part of the story, but part of it is spammers and hoaxers trying to cash in on the fact that people are talking about this,” UBC media professor Alfred Hermida recently explained to The Georgia Straight’s Charlie Smith in a story on social media hoaxes.

The Ministry of Natural Gas memo describes how quickly a single tweet, being picked up by twitter celebrities with large followings, can spread through “thousands of re-tweets” – creating a “cascade of misinformation.”

In the words of Winston Churchill…

Bringing it back to the government’s messaging challenges around fracking, the briefing note warns, “It’s rather difficult to win back the public once the misinformation is etched into the memory of British Columbians.”

[quote]As Winston Churchill pointed out: “A lie gets halfway around the world before the truth has a chance to get its pants on.”[/quote]

But is that a fair description of the social media discourse surrounding fracking and LNG in BC? The way the document reads, it’s as though the government takes for granted that any discouraging words said about these industries must inherently be construed as “misinformation.”

Why all the secrecy?

It’s difficult to know how much weight the government’s concerns hold, since much of the document supplied to Propeller Strategy was redacted. The entire second page, containing specific discussion and conclusions, was whited out, leaving not a single, tangible example of the kind of false claims the ministry alleges surround fracking and LNG.

Says Stan Proboszcz, who filed the FOI request, “I’m disconcerted about what the province may be planning to do to improve the industry’s failing image, given the redactions. Why all the secrecy?”

[quote]It’s clear the province is concerned with the industry’s evaporating social licence.[/quote]

Cleanest fossil fuel on the planet?

Meanwhile, The Common Sense Canadian has been tracking and publishing on social media the evolving, peer-reviewed science related to fracked shale gas, which increasingly contradicts the government’s branding of BC LNG as the “cleanest fossil fuel on the planet”. (This proposed LNG industry would be fed by a major increase in fracking in northeast BC.)

Cornell University climate scientist Dr. Robert Howarth – an acknowledged leader in the field of measuring the real climate impacts of fracking – scoffs at Premier Christy Clark’s “cleanest fossil fuel” claims. Based on his research into escaping methane gas, which is some 86 times more potent as a greenhouse gas over a 20-year period than CO2,“natural gas – and particularly shale gas – is the worst of the fossil fuels…Your premier has her facts wrong.”

That particular story was liked over 2,300 times on facebook and widely shared amongst BC users. Is this the kind of “misinformation” in social media that the ministry is referring to?

In addition to the climate problems associated with fracked gas, “using it in LNG is probably the worst way to use it,” Dr. Howarth explains. “It takes a tremendous amount of energy to liquefy the gas to LNG, so a lot further methane emissions associated with transporting and storing the fuel.”

Studies from the Pembina Institute suggest that just the coastal LNG plants associated with the government’s plan could more than double BC’s entire carbon footprint – and that’s only factoring in a handful of the 15-plus terminals currently proposed for the province.

Even the government’s own scientists have warned it about the climate consequences of its LNG vision – apparently to no avail.

The government is also clearly concerned about criticism of fracking’s impacts on water – criticism which, again, would seem to be prudent, based on the evidence.

In 2012, BC used close to 11 Billion litres of water for fracking – most of that drawn from the rivers, lakes and streams of northeast BC, a region already hard-hit by drought in recent years. And that’s just what was reported through government figures. Not all water extraction is properly measured or reported.

Shale gas expert David Hughes has run the numbers on what it would take to supply those LNG plants, and it means as many as 50,000 new fracked wells – close to double all the gas wells drilled in the 60-year history of the province’s gas industry.

In order to supply this LNG-driven ramp-up, he and Canadian Centre for Policy Alternatives researcher Ben Parfitt figure “a very conservatively estimated 582 billion litres of water would then be polluted and removed from the hydrological cycle.”

On an annual basis, that’s equivalent to all the water used by the city of Calgary.

Coleman and Clark have also made bold claims as to the safety of BC’s fracking with regards to water, but cracks have begun to form in those arguments. In a 2013 Georgia Straight op-ed, Coleman made the following claim: “The net result of both our strong regulatory framework and our geology is that B.C.’s water supply is protected and safe. It has never been contaminated as a result of hydraulic fracturing.”

Yet, one week earlier, The Globe and Mail had broken the story of a leaking tailing pond near the community of Hudson’s Hope – owned by Talisman at the time (now by Malaysia’s Petronas). As The Common Sense Canadian went on to unearth, this pond, containing 30 million litres of contaminated frack water, was leaking into the surrounding soil and groundwater for up to six months before the company went public about it.

The eventual cleanup operation required the removal of some 5,000 cubic metres of contaminated earth.

Minister Coleman may argue on a technicality that there is no evidence of that contamination reaching BC’s public drinking water supply – though that is not even what he specifically said.

We also learned in August that unnamed companies had been illegally dumping contaminated fracking wastewater into the Dawson Creek municipal water treatment system.

All of these stories received considerable sharing and commenting through social media. Each of them based on thorough research and the best available scientific knowledge. And this is on top of a growing body of evidence from across Canada, the United Sates and other fracking jurisdictions of the risks of water and air pollution from shale gas.

Does public have better BS-detector on social media?

With over 1 billion facebook users globally and half a billion tweets sent each day – spanning a broad demographic range – it is becoming increasingly difficult for government and industry to control the public discourse around issues strictly through conventional media.

To this end, the BC Liberal Government is making an effort to engage with the social media space – deploying twitter feeds, hashtags, flickr photo streams, and youtube videos of their own.

Minister Coleman actively uses Twitter, but doesn’t appear to be gaining the kind of “message” traction he’d like. Perhaps it’s because his tweets smack of the very propaganda he accuses his detractors of engaging in.

“In conventional media, it’s the big media companies which get to decide whether messages get circulated or not, and the audience doesn’t have a say,” explains Shane Gunster, Graduate Program Chair at the SFU School of Communication. “So there isn’t really any feedback mechanism (other than yelling at the television) for people to express their opinion.”

[quote]In social media, however, the success of a campaign depends upon that feedback: people are the gatekeepers in terms of deciding if and when messages are circulated through their social networks.  And in that context, PR – especially when it is recognized as PR – is just not going to have much traction because most people don’t want to be perceived as industry or government hacks…I think it’s fair to say there’s a fair bit of scepticism, and even hostility when people see government or industry spending millions of dollars to shape public opinion on issues like pipelines or fracking. [/quote]

When legitimate questions began being raised about plans to outsource to India and China some of the jobs promised to British Columbians from the LNG industry – one of the key justifications for the whole program – Coleman fired back:

It’s clear from this briefing note that the government is worried about the impact social media are having on its LNG vision. And these fears may be well-justified. These media contribute to the erosion of social licence for the industry in several ways.

Not only do they furnish users with information and foster lively dialogue, but sites like facebook have become key tools for organizing public demonstrations, advertising town hall meetings and other forms of real-world protest of the government’s plans.

We have already seen where largely social media-driven campaigns for telecommunications reform and Internet privacy protection have forced policy changes from government. From viral petitions to facilitating public comment in environmental review processes, to calling out public officials, the range of powerful tools social media offers to citizens is only growing.

So while Rich Coleman and company appear to recognize the problem, solving it is very different matter, especially if the social media they dismiss as mere misinformation actually turn out to bear some truth – the inverse of Winston Churchill’s statement.

In other words, in this scenario, the truth gets halfway around the world before the government’s PR flacks get a chance to put their pants on.