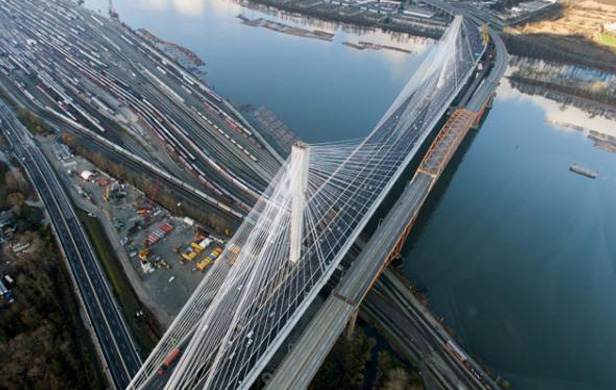 Read this story from Metro News on the opening of the new Port Mann Bridge, which is drawing criticism from a leading sustainable transportation experts for driving climate change-causing car-based transportation instead of more sustainable, modern alternatives. (Nov. 30, 2012)

Its historical significance and sheer wow factor is unquestioned.

But everything else about the new Port Mann Bridge is fair game for sustainable transportation advocates.

Gordon Price – Simon Fraser University director of the City Program and board member of the International Centre for Sustainable Cities – says the government missed a golden opportunity to promote smart regional growth when the 10-lane, $3.3-billion megabridge between Coquitlam and Surrey officially opens Saturday.

Instead the project promotes urban sprawl, car use and champions outdated, 20th century “motordome” thinking, flying in the face of emerging trends indicating decreased car use and more demand for public transportation.

“The most frustrating thing is that [the Port Mann] doesn’t do what they said it was going to do: reduce congestion,” said Price. “The claim is disingenuous when you pass on the opportunity to include rapid transit within the budget. When that happens, expanding the capacity for cars [without an alternative] increases the demand. If people can travel farther in the same amount of time from cheaper land, they will.”

The original Port Mann, which cost $25 million in 1964, opened the region up to expansion south of the Fraser River.

That growth strained the road network, creating a situation today where the old five-lane Port Mann Bridge is congested in both directions 13 hours of the day.

Price doesn’t dispute that a replacement was required and doesn’t doubt commuters will give the bridge plenty of use despite its tolls.

But he calls the final design overkill and unnecessary.

“Why do we need the world’s widest bridge when all the planners said eight lanes would do?” he said. “I doubt you’ll ever need all 10 lanes. It’s today’s Granville Street Bridge, which never reached its designed capacity and never will.”

Robin Lindsey, a transportation expert at the University of British Columbia Sauder School of Business, believes the effectiveness of the Port Mann won’t be known until 2014.

“People need time to adjust and experiment with their routes and decide for themselves about tolls,” he said. “I think it will cope fairly well. Best-case scenario, the peak times drop by as much as an hour and the effect of high capacity works. What happens in 50 years, I haven’t the foggiest idea.”

Forecasting done last year by Steer Davies Gleave, for Port Mann operator Transportation Investment Corporation, showed that traffic volumes on the existing Port Man have steadily decreased from 2005 to 2010, by approximately 8,000 vehicles in that period.

A Frontier Group report on driving behaviour in the U.S. shows the average annual number of vehicle-miles travelled by people between the ages of 16 and 34 have dropped 23 per cent from 2001 and 2009.

While the recession is a factor in both cases, the Frontier Group states high gas prices, licensing laws, improved alternative transportation (public transportation, primarily) and changing attitudes about driving and the environment represent the start of a generational shift.

The City of Vancouver, for example, has reduced traffic volumes in the downtown core to 1960s levels.

Price feels governments have been slow to react because leaders grew up in driving cultures and new statistics showing a shift away from that mentality are so dramatic “it’s easy to be skeptical”.