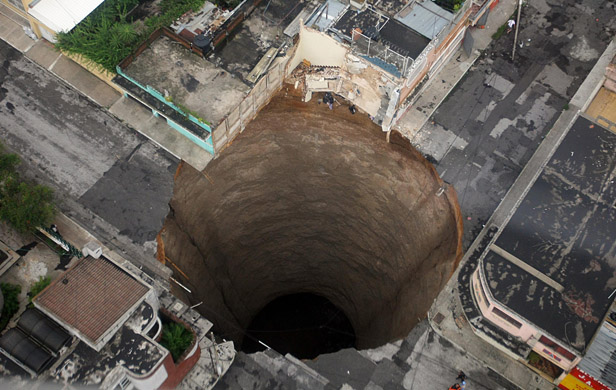 On the quiet night of August 11, 2013, a 30-m-wide sinkhole opened at Summer Bay near Orlando, Florida, and half of a luxury three-story villa collapsed into the yawning chasm. The event destroyed the comforting mood of peaceful security created by the soothing beiges and subtle pinks of the villa’s decorating scheme. Flooring, joists, rafters, walls, trusses and roof tiles tumbled into a tangled mess. Within the fault lines visible in the surrounding grass, a smaller adjoining building leaned at a precarious angle toward the irresistible gravity of the hole. Nearby palm trees were tilted at an uncomfortable angle.

Sinkholes are common in Florida. Much of the southern half of the state sits on a flat bed of limestone where rain, groundwater and intrusions of the Atlantic Ocean dissolve the rock’s calcium, riddling the subsurface with labyrinthian networks of tunnels and caverns. While a few open near the surface to create occasional problems for the 5.5 million people living in South Florida, this is not their biggest threat.

South Florida is flat. Its highest elevation is about 4 metres. Low swamps, bayous and channels define its western shore. Its east coast is comprised of long beaches. Its major city, Miami, occupies a long and narrow isthmus that is barely 2 metres above sea level. And the world’s oceans are rising.

Most of this rise during the past century — about 0.2 metres — has been due to the expansion of water caused by warming oceans. Now the rise is accelerating, compounded by the melting of the world’s glaciers and the ice sheets of Greenland. Scientists expect an additional 0.2 to 0.4 metres by 2050. Predictions are 1 metre, perhaps as much as 2 metres by 2100. Increasingly violent weather events could cause storm surges of 5 or 6 metres. The future of Miami is destined to be wet.

Vancouver near top of list for rising sea level threat

With $416 billion in assets presently at risk, Miami is number two on the list of the 20 major cities most in danger of flooding, just behind Guangzhou in China. New York, New Orleans, Mumbai, Nagoya, Tampa-St. Petersburg, Boston, Shenzen, Osaka-Kobe and Vancouver follow in that order.

On a list of 136 major coastal cities threatened by rising ocean levels, Vancouver places as the 10th most at risk of suffering serious damage, according to a study authored by Dr. Robert Nicholls, a professor of coastal engineering at the University of Southampton (Globe and Mail, Aug. 20/13).

$1 trillion a year at stake from rising oceans

Without extensive efforts to mitigate the damage from rising oceans, losses to coastal cities are expected to reach $1 trillion per year by 2050, although complex and expensive engineering projects could reduce annual damage to $63 billion (Ibid.). The city of New York is planning a $20 billion enterprise of movable flood walls to protect Manhattan, with 6 metre levees to save Staten Island and artificial dunes to spare the state’s Atlantic coastline.

But the prospects present sobering challenges. And New York is but one coastal city at risk. A study in the Proceedings of the National Academy of Sciences predicts that 1,700 American towns and cities will be below sea level by 2100 — the number could be reduced to 80 if all carbon dioxide emissions stopped immediately.

Miami’s low elevation and lack of grade is already presenting water problems. Torrential rainstorms, a common event in Florida, overburden the drainage systems and cause shallow flooding of streets and neighbourhoods. Very high tides can send the sea gushing up through manhole covers (Jeff Goodell, “Goodbye, Miami”, Rolling Stone, June 30/13). The 88 million litres of sewage that Miami produces every day is increasingly difficult to pump away.

Fresh water supplies are already compromised by rising ocean levels, a problem exacerbated by the 12 billion litres per day that South Florida draws from aquifers for drinking and agriculture. This lowering of fresh water levels invites an even greater intrusion of salt water into wells, many of which have been abandoned for drilled replacements.

The challenge and expense of getting adequate supplies of fresh water is expected to get worse. The option of desalinization as a costly source of fresh water may be unaffordable as the state and city struggle with the financial burden imposed by combating the other threats of a rising ocean.

Miami is not New Orleans

Miami is not New Orleans, explains Piet Dircke, the program director for water management in the Netherlands:

[quote]New Orleans looks a lot like the Netherlands — it is below sea level, with a big dike around it. If you don’t pump it out, the city drowns. It’s a big bathtub. We know how to do that. Miami is different” (Ibid.)[/quote]

Glenn Landers, a senior engineer at the U.S. Army Corps of Engineers, elaborates about the low and porous limestone plateau that underlies South Florida. “Imagine Swiss cheese,” he says, “and you’ll have a pretty good idea what the rock under southern Florida looks like” (Ibid.).

Even if it were possible to build the thousands of kilometres of dikes necessary to keep the area dry, rising ocean levels will find access via the innumerable passages in the limestone. The volumes of water arriving by this subterranean means will be too persistent to stop and too great to remove.

So the same kind of sinkhole that swallowed the luxurious villa in Summer Bay will become a critical part of Southern Florida’s watery future. If the scientific predictions are correct, such sinkholes may be the only unique feature that distinguishes Miami from the hundreds of other coastal towns and cities trying to save themselves from the threat of rising oceans.

2 thoughts on “Sinkholes and other sinking feelings”