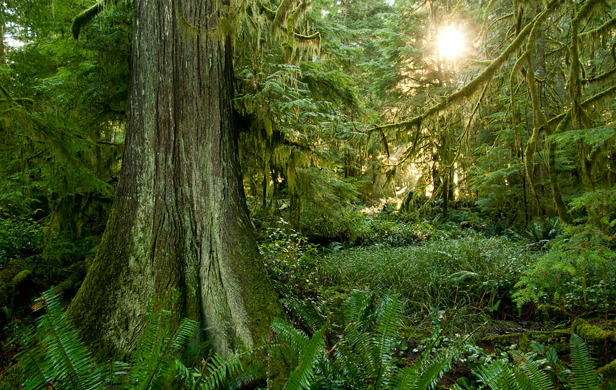 Exasperation is the tone of the full page ad placed in a March edition of Victoria’s Times-Colonist newspaper by the Discovery Islands Marine Tourism Group, a coalition of businesses associated with an ecotourism industry employing over 1,200 people and generating $45 million for the local economy. Their problem is logging, specifically in areas where they have established a strong and burgeoning economic foundation to replace a forest industry that has essentially deserted the region.

“The Discovery Islands,” explains the Group’s spokesperson, Ralph Keller, “have become a world class destination worthy of protection. We’ve become the second most important marine wilderness destination in BC, behind Tofino/Pacific Rim, yet the government is managing the forests here like it’s 1956. They’re treating us like bystanders instead of major revenue producers and employers” (Discovery Islander, “Tourism Businesses Slam BC Liberal Forest Policies”, Mar. 22/13).

The source of this problem has two components. The first is the elimination of appurtenance, the stipulation that once linked logging of Crown land with the local processing of logs. This traditional arrangement generated lucrative employment in the manufacture of lumber, pulp and paper products. When appurtenance disappeared, so did most of the mills which were part of a broadly based forest industry that had economic relevance and social respectability. “The once great forest industry,” Keller notes, “is now just a logging industry acting with impunity, completely insensitive to our needs. They degrade our operating environment then send the timber not only out of the region, but out of the country” (Ibid.).

This points to deregulation, the second part of the problem. “We’re not against logging,” Keller explains, “but when the government revised the Forest Range and Practices Act in 2003, they gave all the power to the logging industry and left everyone else out of the planning process. We find out about forest development plans when we start to see trees being felled. We’re being misled about forest industry intentions and have no meaningful way to influence cut block design. When we complain to government, they tell us to go talk to the licensee… . Who’s writing the rules here? Whose forests are these?” (Ibid.).

Keller has a valid complaint. The particular forests of concern in the Discovery Islands are not privately owned — they belong to the people of BC. They are licenced to logging companies for the benefit of the larger community. If that benefit is no longer being served because of changed circumstances, then companies such as TimberWest have lost both their actual and moral legitimacy as key economic drivers. Indeed, in many cases, their logging becomes a net liability to the larger interests of the community. TimberWest, therefore, should conduct itself with a respectful deference to the other economic interests that are superseding logging in importance — ecotourism being a prime example.

A sampling of ecotourism’s problem with logging in the Discovery Islands occurred in 2012 at Boat Bay on West Cracroft Island — the solution to this problem is presently postponed rather than solved. A logging company with the cutting rights on a Tree Farm Licence — the public’s land — intends to cut 60 hectares above and around a kayaking base camp across from the world-famous Robson Bight. Such logging would ruin the aesthetic attraction of the base camp, isolate a nearby forest reserve, and create a visual eyesore for one of BC’s most important scenic marine corridors.

The kayaking company did an illuminating economic analysis. It calculated that the economic value of the 60 hectares of timber to be logged was $3,600,000. Since the regeneration cycle meant the area could be cut only once every 60 years, the yearly economic value of the timber was $60,000. The economic value to the kayaking company, however, was $416,000 per year, or $24,960,000 for the same 60 year period. In stark contrast to the approximately 300 person-days employment from logging the 60 hectares just once, the kayaking company provided 20,160 person-days of employment during the 60 year cycle. And this simple economic analysis didn’t include the employment and earnings for the 40 other ecotourism businesses using the same area. These calculations suggest that logging, when it is in conflict with high-use ecotourism areas, is economically and socially indefensible.

A more current example is evident on Sonora Island. Several cut blocks containing old-growth trees in the Discovery Islands are to be logged by TimberWest this summer — even though TimberWest contends it is not cutting old-growth because of its rarity. “Yet in one block alone,” wrote a concerned islander in her letter to the editor of the Discovery Islander (“TimberWest Has No Plan Except Cutting Until It’s Gone”, Ibid.), “we recorded 160 tall, straight, beautiful, old growth trees, mostly Douglas fir, the rest red cedar, about 700 years old.”

These remnant pockets of old growth forests should be treated as ecological treasures. They are all that’s left after the incessant logging that has almost obliterated the magnificent lowland stands which were once the hallmark of the Gulf of Georgia. For the ecotourism industry and for our collective human legacy, these few remaining pockets should be places to visit, not opportunities to log. They are nature’s temples where people from around the world can come to honour some of the largest and oldest living things on the planet. Any but the most venal of intentions would understand that these are sites for preservation and pilgrimage, rare opportunities for visitors to encounter the unimaginably slow time of primal forests and to lose themselves in silent and reverential awe. That screaming chainsaws should be allowed to desecrate such places is, frankly, a moral, aesthetic and economic obscenity.

Old growth trees should be sacrosanct. The butchery of clear cuts that scar green hillsides can be avoided by open consultation, thoughtful silviculture and sensitive logging. TimberWest has the professional skills and the social responsibilities to do better than affront Discovery Islanders and raise the hostility of the 120 tourism businesses that depend on the scenic grandeur of this treasured coast.

Correction: Alexandra Morton was very quick to note — she seems to be fastidious about accuracy — that the sushi from farmed salmon referred to in last week’s column, Salmon Confidential, was not tested for ISA. She concurred with all the other material in the column.