As The Common Sense Canadian reported on Friday, the plant, proposed by Malaysian energy giant Petronas’ Canadian subsidiary, Progress Energy, would be situated amid vital salmon habitat in the Skeena estuary. According to WCEL, that would have been a red flag for many citizens and environmental groups had the project documents accurately reflected this important fact. As a result, the federal agency reviewing the proposal received less feedback than a project of this nature would ordinarily elicit – a point CEAA conceded with its announcement today that public comments will now be accepted until September 20.

Funding applications for groups and individuals to engage with the project’s environmental assessment process will also now be accepted until September 20.

“We are very pleased that CEAA has acknowledged the potential confusion that resulted from this incorrect map,” says WCEL Executive Director Jessica Clogg. “It’s a small piece of good news for the Skeena salmon…Flora Bank, which sits directly adjacent to the proposed project, is critical salmon habitat that was omitted from the original map.”

Clogg’s enthusiasm is tempered, though, by larger concerns which remain around the lack of big-picture review for the whole LNG program, which contains up to 12 different proposals in Kitimat and Prince Rupert.

“The ‘Case of the missing Skeena’ may have been resolved in the short term, but we still have this piecemeal approach to reviewing myriad projects, which makes it harder for people to catch things like a missing river. What we need is a process that takes a strategic look at all of the potential cumulative impacts on the things that British Columbians care about – our salmon, water, air quality and climate.”

The engineering firm that produced the faulty map, Stantec, blamed the mistake on an error that arose from combining incompatible federal and provincial mapping data sets, as senior principle Ward Prystay explained yesterday to Metro News:

“The provincial data sets and the federal data sets in this specific area didn’t compliment each other,” he said, explaining that after using layers that show First Nations communities, provincial parks, roads, railways and tidal lines, the Skeena somehow disappeared.

“…Where there was missing data they actually inserted a blue background on it to be able to get the water to show up looking like blue on the [revised] map.”

According to Karen Fish of CEAA, “The corrected map has also been included retroactively in the original project. Both the original map and the new revised map will be made available on the Agency’s website, along with a notice referring to the revision and the date on which it took place.” 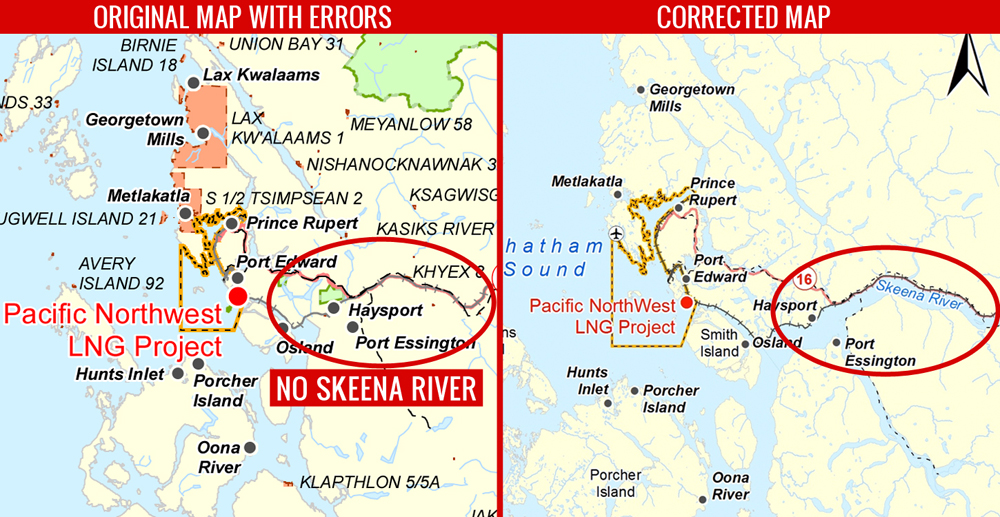