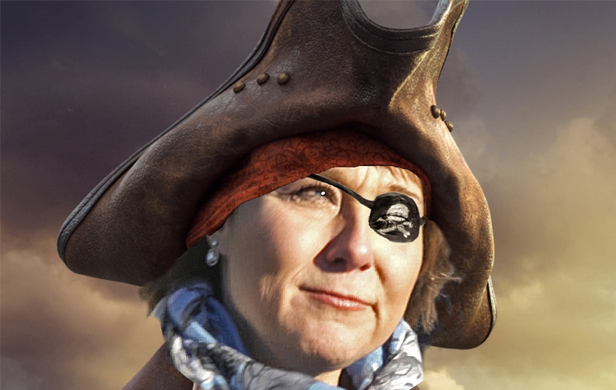 Until the mid-twentieth century, much of British Columbia lacked reliable and affordable electricity. To resolve the privation, W.A.C. Bennett created BC Hydro, a publicly owned utility. The province’s leader acted because the private sector had refused to meet growing needs for electricity. Unlike less effective successors, Premier Bennett was a pragmatist, not an ideologue.

Existing power producers focused on profitable services in the southwest but Bennett had a province-wide vision. His was an audacious plan, but appropriate and successful. BC Hydro became indispensable to the growth and wealth of British Columbia. However, success sowed seeds of destruction.

BC Hydro’s profitability and financial strength guaranteed corporate raiders would attack, seeking to convert public wealth to private. To be successful, they needed cooperation of modern political rulers and, whether explained by incompetence, philosophical bent or desire for covert rewards, the Liberals cooperated fully.

Ironically, among today’s political facilitators of the utility’s destruction is W.A.C. Bennett’s grandson, BC Hydro Chair Brad Bennett, a Liberal apparatchik and close Christy Clark pal. Another is Hydro CEO Jessica McDonald. She was Deputy Minister and confidant to Gordon Campbell in 2006 when the premier’s office invited predators to get rich on electricity. (Blogger Alison Creekside named lucky BC Liberal operatives and allies in her article Gordon Campbell’s Big Jobs.)

[quote]B.C. Hydro announced the outcome of its 2006 tender call for electricity from private energy developers. The results were startling. Not only had B.C. Hydro agreed to buy three times the power requested in the tender, it had done so at locked-in prices far above projected market rates.

…The core of that policy was laid out in the 2002 Energy Plan, which prevents B.C. Hydro from building new generation assets, and transforms the Crown corporation from a generator of publicly-owned electricity to a purchaser of energy from the private sector.

The rationale for this change is hard to fathom. The old policy worked very well. By generating its own power, B.C. Hydro ensured that ratepayers enjoyed, on average, the second lowest electricity prices in North America. This is because prices were based on the historic cost of production, not the current energy market price…[/quote]

Dr. Calvert’s warnings were insufficient and subsequent Liberal actions even more egregious. The professor noted early independent power producer (IPP) contracts locked BC Hydro (and BC taxpayers) into financial commitments of up to 40 years. Recently, contracts have extended to 60 years and all are indexed to protect suppliers against inflation. Some required large public expenditures for distribution. Calvert said IPP prices were double the market value but they’ve since risen to even more.

We also know that, instead of costing between $400 million and $500 million every year, IPP payments have climbed beyond $1.3 billion yearly, a number that has increased 188% since 2011 when Christy Clark was appointed Premier.

Indeed, the utility’s records reveal that electricity consumption by regular customers has been flat for more than a decade. 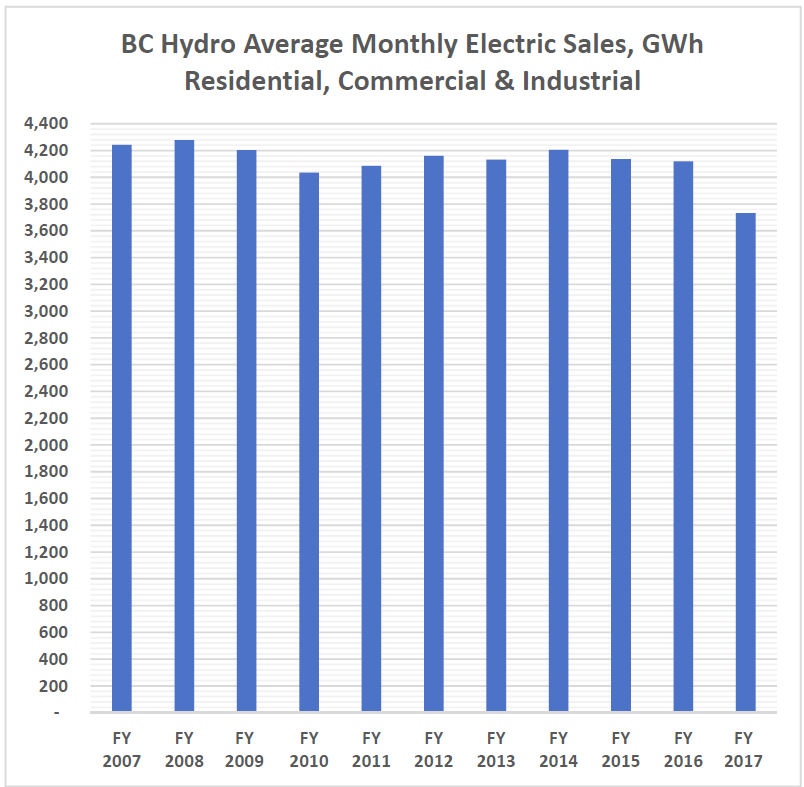 IPPs get rich on ratepayers’ backs

Despite all the above, over the past decade, amounts paid to IPPs have tripled. Independent power producers more than doubled deliveries to BC Hydro and the utility was forced to dump surplus power outside the province, with trades sales at an average, since 2005, of just 28% of prices paid private producers. And that loss is made worse because of Hydro’s collection and distribution costs.

So, for every dollar we pay them, we lose more than 72 cents.

Consumer demand was not growing, private power supplies were rising and export markets were soft. BC Hydro could only dump power outside the province for little revenue or reduce its internal production. Again, the utility’s own reports lead to a conclusion.

The following numbers are drawn from BC Hydro’s annual and quarterly reports and from U.S. Department of Energy market recaps. They demonstrate that in nine months, BC Hydro paid more than $600 million above market to independent power producers – having purchased the power from IPPs at $85,261/GWh, while the market for selling electricity to the US market was just $28,930 CAD per unit. Unfortunately, the rate of loss is accelerating. 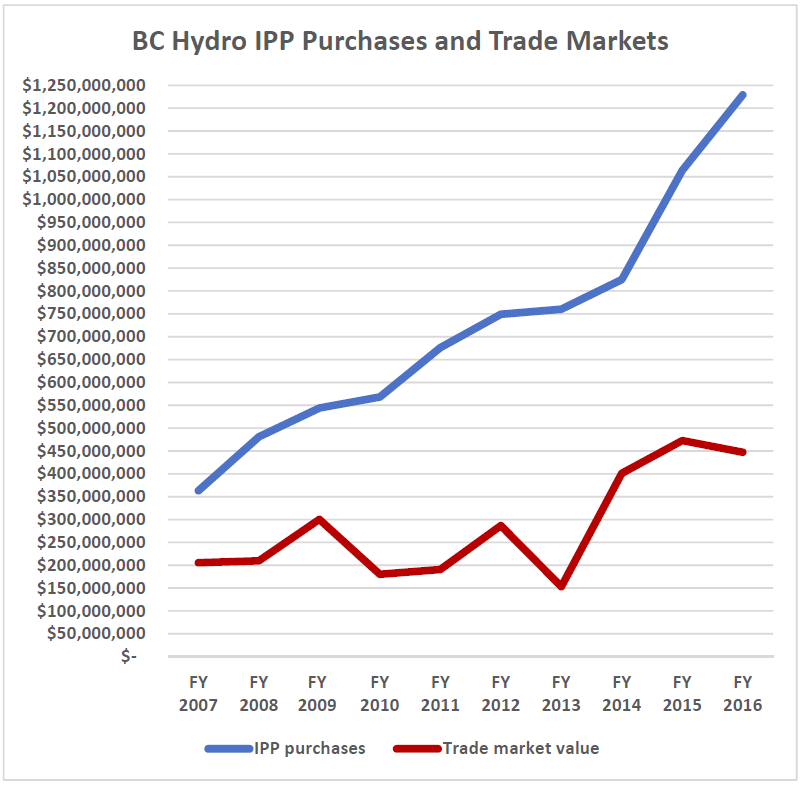 The Liberal Premier and cabinet failed catastrophically when they directed BC Hydro to contract for private power the utility did not need at prices it could not afford. The extent of this gross mismanagement, unprecedented and ruinous for the crown corporation, remains concealed by government-friendly media that is enjoying millions of public funds spent on advertising and public relations.

The Liberal decision to exercise absolute control over BC Hydro’s management was made clear in 2008. CEO Bob Elton, a qualified professional, was fired by Gordon Campbell after stating publicly, “Conservation is the cleanest, easiest and least expensive way to meet the increasing demand for electricity in B.C. – it’s like building a virtual dam.”

Reducing consumption of electricity simply did not fit with the Liberal gang’s desire to buy private power from their pals for tens of billions of dollars.

The goose that lays the golden egg

More recent opponents of Liberal power policy assume that, beyond grabbing the profits to be made flipping IPP contracts, political operatives aimed to cripple BC Hydro to make its privatization palatable. The writer believes that, while this was the initial plan, the guiding parties decided they could gain more another way.

There was no need to privatize Hydro’s assets and liabilities. Instead, they privatized its profits and left Hydro and the public with all the financial risks.

One example is Site C, which will create more unneeded and unaffordable power. No private investors in the world would fund a hydroelectric dam with environmental issues, First Nations conflicts and near zero prospects of profitable operations. But, if the public pays for the dam and sells power to the private sector at a fraction of cost, there are private profits to be made.

Budgeted at $8.8 billion, if spending on Site C matches other Liberal megaprojects, it will cost substantially more. That money goes straight into the pockets of big construction companies who have donated heavily to the Liberal Party. Far from caring about keeping the project on budget, they have a huge incentive to see that it goes over.

In addition, there are indicators the dam’s output will be less than forecast. In 2011 through 2016, BC Hydro’s three largest facilities annually produced 3.6 times stated capacities. Proponents claim that Site C, with 1,100 MWh capacity will produce 5,100 GWh. That is a ratio of 4.6, considerably above Hydro’s typical experience. Reduced production will mean higher costs for each unit of power the dam generates. 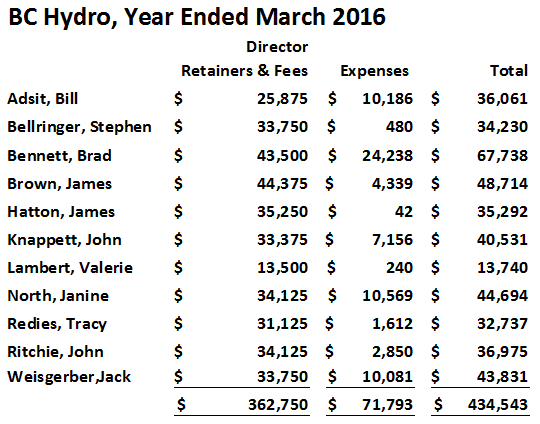 Clearly, BC Hydro has been in disarray for some time. In fact, it is operating as an affiliate of the BC Liberal Party. Of the eleven people collecting fees as directors of the province’s utility in the last fiscal year, all have records as party contributors or close associates of Liberal politicians. Some have business dealings impacted by business activities of BC Hydro.

Political meddling, moronic contracts, deceptive accounting and the self-serving management of mediocre hacks devastated what was once a competent and professional crown corporation. Not by accident or mere negligence, this was deliberate.

Recovery will not be simple or quick but, if it is to happen at all, a new beginning starts with the provincial election on May 9.

Norm Farrell is a longtime blogger and published of IN-SIGHTS.