Twenty-five years ago, after consensus on the reality and impacts of manmade climate change led to the formation of the Inter-governmental Panel on Climate Change, western governments had two choices. They could either stop subsidising fossil fuel industries and invest the savings in promoting energy efficiency and renewable energy (e.g. putting solar panels on all public buildings to bring the price down for homeowners) or they could make long, lingering love to Fido.

They chose the latter and now, a quarter of a century later, we are being told by these same governments that our best hope of averting the worst consequences of climate change is to embrace nuclear power.

Assume for a moment that it is possible to guarantee there will never be another Chernobyl or Fukushima (and that’s a very large and problematic assumption), you can never produce nuclear energy without producing nuclear waste. This waste – leftover plutonium and uranium, as well as various isotopes – can remain  lethally radioactive for an unimaginably long time.

Half a century after realizing quite how dangerous nuclear waste is, there is still no safe way to dispose of it – nor is there ever likely to be.

That’s not to say there haven’t been some ill-conceived suggestions, including dumping it in the oceans and blasting it into space. (In the aftermath of the Challenger space shuttle disaster, my father-in-law – a renowned nuclear physicist – commented that the tragedy should at least serve as a warning against the latter proposal. Unfortunately, he was wrong. Apparently it might be a good idea to put nuclear waste in orbit around Venus– in case we ever want to retrieve it. I kid you not.)

The waste problem is very bad news for the nuclear energy industry and, like many other industries in the past, it has decided the best thing to do with bad news is to bury it.

As Anna Tilman reports in the current issue of Watershed Sentinel, proponents of nuclear power (both industry and government) have decided that Deep Geological Repositories (DGRs) are the “final solution” to the problem of nuclear waste.

The theory behind DGRs is that nuclear waste can be safely stored “forever” deep underground in geologically stable areas.

The reality, as Tilman points out, is that “nothing is immutable, not even rocks. Containers will eventually corrode. Cracks and fissures will develop. Groundwater will seep in. Water and gas contaminated with radionuclides will penetrate the barriers. Chemical and microbial processes and interactions will occur, with unpredictable results. Climate change, glaciations and earthquakes could severely destabilise the repository.”

Ignoring Geology 101, governments (including Canada’s) have been pushing hard for many years to establish DGRs. So far, none have succeeded, although one is currently under construction in Finland. (A documentary about this project, Into Eternity, eloquently makes the case for why this is a bad idea. It should be required viewing for all government leaders.)

Finding an “informed and willing host community” is, not surprisingly, a challenge for Canada’s Nuclear Waste Management Organization (a federal agency established in 2002 and run by the nuclear industry), despite the fundamentally flawed consultation process Tilman describes in her article.

The International Atomic Energy Agency (IAEA) estimates that the volume of radioactive waste on the planet already exceeds 345,000 tonnes – 50,000 tonnes in Canada alone.

We’ve created this disaster and, of course, we have to deal with it. (Personally, I would establish secure, monitored, above ground storage facilities paid for by and located in the backyards of every nuclear power industry executive and government supporter.)

What we absolutely, positively do not have to do is add to the problem.

Every year, each of the more than 400 nuclear reactors currently operating in 31 countries adds an average of 30 tonnes to the total volume of nuclear waste.

This is the sign the IAEA thinks will protect thousands of future generations from the dangers of nuclear waste: 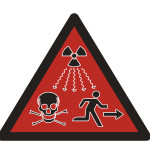 This is the sign I think will best protect them: 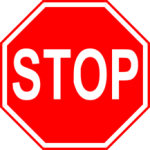 1 thought on “Geology 101: Why Nuclear Problem Can’t be Buried”