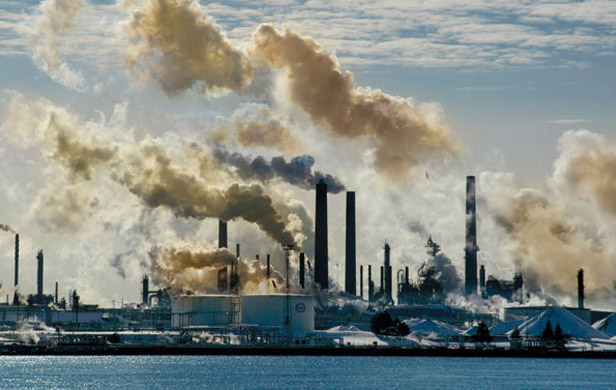 A new study is drawing attention to the health problems being faced by a First Nations community living near one of Canada’s most industrialized areas.

Members of the Aamjiwnaang First Nation living on a reserve near Sarnia, Ont., have long suspected harmful chemicals were behind an unusually low male birth rate and slew of other reported health issues.

Now, tests performed by a McGill University professor suggest mothers and children are being exposed to higher-than-average levels of harmful hormone-blocking pollutants.

While the study doesn’t prove that the pollutants are to blame for earlier research that found baby girls outnumbered boys by a two-to-one ratio in the community, it does suggest a possible link.

The reserve at the centre of the study is located near a patch of southern Ontario that some environmental activists call “chemical valley.”

There are 60 industrial facilities found within a 25 kilometre radius of Aamjiwnaang lands.

“It’s the first study to really show that mothers and children in the area are exposed to a number of pollutants,” said Niladri Basu, a McGill professor and the study’s lead author.

More detailed research is needed to establish a connection between pollutants, health risks and the surrounding environment, Basu said.

Residents of Aamjiwnaang have been calling for such a study for years, though a lack of funding continues to impede more detailed research.

Ada Lockridge, who helped found Aamjiwnaang’s environmental committee, said pollution is a fact of life for the reserve’s roughly 800 residents.

Like others in the community, Lockridge keeps a special plastic bucket — as part of a group known as the “bucket brigade” — to collect environmental samples that can be tested for toxins whenever the air seems especially poor. The results are sent to a U.S.-based monitoring organization.

“It’s a beautiful place, but there is all kinds of industry close by,” she said.

According to Lockridge, the evidence continues to mount in favour of stricter environmental controls in the area.

“Everything we do gets us a little further, but it’s moving very slowly,” she said.

[quote]Every study we’ve ever done, people say, ‘this is cause for concern,’ but more studies need to be done.[/quote]

Approximately 40 per cent of Canada’s chemical industry is clustered in the area, according to a 2007 report by the Canadian environmental group Ecojustice.

Located at the southernmost tip of Lake Huron on the border between Ontario and Michigan, activists say the area has become one of Canada’s pollution hot spots — lined with chemical plants, manufacturing plants, and refineries.

A 2006 community survey by Aamjiwnaang’s environment committee cited a number of health issues, including miscarriages, chronic headaches and asthma. Forty per cent of band members surveyed required an inhaler.

As it stands, it’s difficult to draw a direct correlation between pollutants and health issues such as the low male birth rate.

“This is a start, and it’s a great start, but to me there’s so much that needs to be done, and there’s no money,” she said.

More studies needed, but government money hard to come by

MacDonald said it’s been difficult to get government funding at both the federal and provincial level. A more comprehensive study that includes the surrounding area, Lambton County, has stalled due to lack of funding. Said MacDonald:

[quote]The major exposures in this community are via air, so I would like to see a study focusing on air pollutants.[/quote]

For the recent McGill study, 43 mother-child pairs from the community were tested for environmental pollutants. Blood, urine and hair samples were taken from those who participated.

Exposures were higher-than-average for chemicals such as cadmium, possibly mercury, and polychlorinated biphenyls or PCBs.

Potential sources of the chemicals are industry, the general environment, and the home. It’s not conclusive which is to blame in this case.

PCBs are used in industrial applications such as coolants in transformers and motors and have been largely banned, although they can remain in the environment for years.

Previous studies of other populations have linked exposure to PCBs with low male birth rates.