Recently I went to the
first TransLink open house on their proposal to spend $150 to $175
million dollars on a freeway overpass in New Westminster. The
intention is that this overpass will become part of the North
Fraser Perimeter Road (NFPR) freeway through New
Westminster, which is part of the Gateway freeway megaproject.

The C3 bus to the open
house was eleven minutes late, which is apparently typical for this
route. I was told by one C3 rider that it is impossible for the
drivers to keep on schedule and they even have to skip parts of the
route to save time.

This example of poor
transit service is one of the results of TransLink not having a clear
mandate to increase transit ridership, and reduce automobile
dependency. Instead, when TransLink was created by the NDP provincial
government in 1998 it was given the mandate to balance roads and
transit investments, not a clear directive to put transit first.

The TransLink staff at
the open house were at a loss to explain what this project is meant
to achieve. It seems like this project is being driven by Gordon
Campbell’s TransLink
board, and has little support from TransLink staff.
After a while I had to ask who I could talk to who really thought
that the project was a good idea. Then I got the spin that the NFPR
freeway is about moving trucks. When I asked about what the same
amount of money would achieve if invested in short
sea shipping (which is like transit for goods movement
with one tug and barge carrying as many containers as 100 trucks),
the story was that it might be a good idea but it is not TransLink’s
job to find efficient ways of moving goods.

Thanks to the
organizing efforts of New
West Environmental Partners and others, hundreds of
New Westminster residents flooded TransLink’s open house, along
with a few like me from around the region. People’s
dissatisfaction with the idea of our transit agency bulldozing homes
for a freeway was very strong. The ‘open house’ format with very
limited opportunity for members of the public to speak out also
attracted a lot of criticism, and before the evening was over
TransLink staff announced that a town hall-style meeting would be
held in New Westminster. That meeting, which they promised would
include a chance for members of the public to speak to the whole
audience, is now scheduled for Tuesday December 7, 2010 – 6 to 8:30
p.m. at the Justice
Institute of British Columbia, at 715 McBride
Boulevard New Westminster. (If you plan to get there on the C3 bus
allow extra time – it will probably be late.)

TransLink’s road
building division may have missed the irony, but Tuesday December 7
is the Global Day of Action for Climate Justice, timed to coincide
with the UN talks on global warming in Cancun, Mexico. This day of
action is an initiative of Via
Campesina, the global organization of small family
farm owners and farm workers, who have called for creating ‘1000
Cancuns’ around the globe to support the Mexican farmers who will
be in Cancun calling for real action on global warming. On the same
evening the first Metro
Vancouver People’s Assembly on Climate Justice will
be held at SFU Harbour Centre, with the aim of building a broad
Climate Justice movement in the Lower Mainland.

Considering that the
official Cancun negotiations are expected to be a fiasco, perhaps it
is fitting that TransLink’s road builders have chosen this day to
promote the Gateway freeway fiasco. The Gateway freeways are one of
the greatest threats to farmland in the Lower Mainland, and roadway
expansion is one of the main drivers of increasing greenhouse gas
emissions in BC and globally. While governments talk about cutting
carbon emissions and confronting the climate crisis, the reality is
that they are spending our money to increase emissions and the
consumption of Alberta Tar Sands oil.

TransLink was never
given the mandate needed to turn around our transportation system to
deal with the twin challenges of global warming and peak
oil. Instead, it was intended to improve the delivery
of the same old ‘balanced transportation’ model that has been
common since the freeway revolts of the early 1970s made freeway
building controversial. ‘Balanced transportation’ usually means
expanding roadways and promising to improve transit at the same time,
and is often used to greenwash urban freeway building. For
example, in 2008 former BC Transportation Minister Falcon justified
the Gateway freeway expansion megaproject by claiming “transit
alone is not the solution… ensuring that we have a balanced
approach to improving transportation infrastructure will take us into
the future in a manner that is environmentally and economically
sustainable.”1

The fact is that
building transit and freeways at the same time increases overall
travel by automobile; and greenhouse gas emissions and oil
consumption increase along with automobile travel.

Continuing with the
‘balanced transportation’ approach of the last four decades is
not any kind of solution. TransLink needs a clear mandate to reduce
greenhouse gas emissions and oil dependence by focusing on transit
improvements.

If you can’t make it
out to TransLink’s meeting on Tuesday, they have a feedback
form where you can let them know that you want better
transit not freeways. If you live in New Westminster, contacting
City Council is the best way to stop the NFPR freeway
– they can veto the whole project. 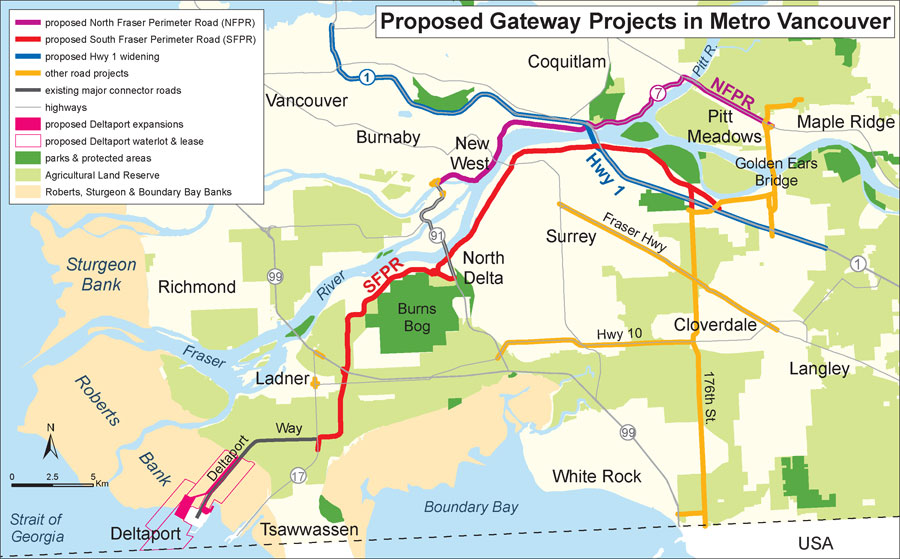