Scientist Rob Williams is concerned about the Enbridge, Kinder Morgan and Vancouver Airport proposals that will increase tanker traffic along BC’s coast.

It’s a gray day in Knight Inlet, B.C. The calm silver surface of the water occasionally breaks with the fin of a dolphin. Dr. Rob Williams, marine conservation biologist, alumnus of UBC and head of Oceans Initiative, is helping PhD student Erin Ashe to count Pacific white-sided dolphins as they swim by. With the boat engine turned off, they are listening for orcas. They hear a sound — in the air — not over the hydrophone. It sounds like a storm coming.

Williams pulls in the hydrophone and gets ready to head home before the rainstorm hits. He looks around. The boat is surrounded by a solid school, hundreds of dolphins, storming by at top speed like horses galloping. Out of the corner of his eye he spots the dorsal fins of orcas. Over the course of a half an hour the orcas herd the dolphins into the bay, closer and closer to the shore. In a panic the dolphins leap to get out of the way of the whales. The largest male orca breaches the water aiming for a dolphin, striking it. Stunned, the smaller animal floats motionless in the water while the whale comes back around.

Williams has researched the local dolphin, orca and other at-risk marine mammals since 1995. “You forget what extraordinary wild animals the orcas are, what extraordinary animals the dolphins are, and how they live their lives. And, of course, their lives depend on being able to hear signals — like an orca is coming. That reminds us how important it is to keep the ocean as quiet as possible so that they can hear what they need to hear.”

Currently a Marie Curie Research Fellow at University of St Andrews in Scotland, Williams spends half the year doing field studies and conducting research off B.C.’s coast, and the other half in a university setting. He is concerned about the recent proposals for increased oil and fuel shipping in and out of B.C. “The orca populations off Vancouver Island are listed in the Species at Risk Act. The populations off the south coast of Vancouver Island are in worse shape,” says Williams. More ship traffic could have a disastrous effect on these and other threatened whale populations.

The increased tanker traffic from the proposed Enbridge Northern Gateway Pipeline to Kitimat, Kinder Morgan’s planned expansion of the Trans Mountain line to Burnaby, and a proposal to ship jet fuel up the Fraser River, would bring with it intensified ship noise, increased risks of spills and more ship strikes. The Enbridge Project alone would add 200 ships per year to the coast. The Vancouver Airport’s proposed port for supertankers at the south arm of the Fraser River, and Kinder Morgan’s proposal would increase the size and frequency of ships in the southern coast region.

In 2008, Williams and Ashe partnered with Dr. Chris Clark at Cornell University to conduct an ambitious study of ocean noise from ships operating in B.C. coastal waters. Ship noise affects dolphins and whales that rely on sound to communicate, detect prey and avoid the ships themselves. Threatened humpback, blue, killer and fin whales are at risk of death by ship strike, and all marine mammals are threatened if there is a catastrophic oil spill.

Sound is the key sense for dolphins and whales to find their way around, detect predators, find food and communicate. The sound frequency range within which whales communicate and echolocate corresponds to the frequency range of ship noise. Ships hundreds and even thousands of miles away interfere with the acoustic space of these animals. With more ship traffic, the ability for whales and dolphins to communicate, search for prey, and avoid predators will be compromised.

“Mind-bending” is how Dr. Peter Tyack, formerly Senior Scientist at Woods Hole Oceanographic Institute and now a professor at the University of St. Andrews, describes the distance that sound travels through the oceans. He cites a study where sound released underwater in the southern Indian Ocean could be heard in Bermuda and Monterey, California, thousands of miles away. Whales use sound for communication, sometimes over a thousand kilometers. “Marine mammals have evolved over the last tens of millions of years ways to depend on sound to both explore their world and stay in touch with one another… In this frequency range where whales communicate, the main source globally in the planet for noise comes from human ships. The effective range of communication [between whales] goes from a thousand kilometers to ten kilometers,” says Tyack. “If this signal is used by males and females to find each other for mating, imagine the impact this could have on the recovery rate of endangered populations.”

In the presence of ships and ship noise, whales have to expend more energy to find food, and they have to change their calls to use higher frequency sound and increased volume. If a whale can’t find food because of ship noise, his survival may be threatened; if a mother can’t hear and locate her calf, they risk being separated and the calf killed by predators; if whales can’t hear each other to locate mates, their population recovery is in jeopardy; if dolphins can’t hear approaching orcas, they can become prey.

On July 25, 2009, The Sapphire Princess, a massive cruise ship owned by Princess Cruise Lines, headed into the Port of Vancouver. The crew and holidaying passengers were unaware that the body of a 70 ft. long female fin whale was wrapped around the ship’s bow. It had been there probably since the ship toured the area between Alaska and Vancouver Island.

The fin whale, after the blue whale, is the earth’s largest living animal and is listed as “protected” by the International Whaling Commission and “endangered” by the World Conservation Union. Hits can result in external and internal injuries, suffering and drawn-out deaths. Williams has conducted studies of ship strikes that have injured or mortally wounded whales. The areas with highest risk for ship strikes with humpback and fin whales (Dixon Entrance, north North Haida Gwaii Islands, Hecate Strait) correspond to areas where the proposed Enbridge ship traffic would occur. 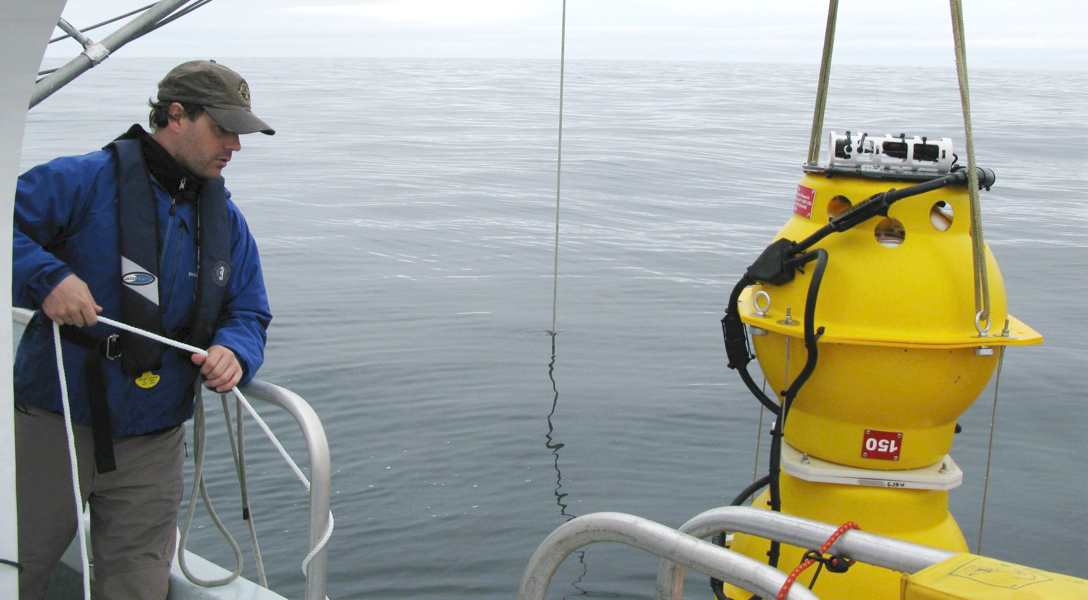 Propeller wounds on orcas are relatively common and the highest risk area for them is Johnstone Strait. “Port expansion and a proposed pipeline for carrying oil from Alberta to BC’s north coast (with associated oil tanker traffic) would increase ship strike risk for all three species,” says Williams. South from Kitimat through Hecate Strait, Johnstone Strait and around the southern tip of Vancouver Island have areas where whales and ships overlap. The sound of ships in the same area where whales are feeding is believed to cause the whales to be disoriented, which could increase the risk of potential strikes. Williams believes that “the few known cases of collisions involving fin whales suggest that mortality due to ship strike for this species may already be approaching or even exceeding sustainable mortality limits.”

At noon on August 20, 2007, a Ted Leroy Trucking Ltd. barge moving fuel and heavy equipment listed and drifted into Johnstone Strait’s Robson Bight Ecological Reserve. The barge tipped over, losing to the sea its cargo of eleven vehicles and a fuel truck loaded with 10,000 L of diesel fuel. The resulting spill affected 62 square kilometers of marine environment. The slick on the surface of the water persisted for days until it dispersed into the larger body of water. “All the oceanographic factors that help concentrate salmon into a bottleneck area, such as narrow areas in Johnson Strait, will attract orcas,” says Williams. In fact, during the days of the barge spill, scientists estimated that 25% of the threatened northern resident orca (NRKW) population was seen within its vicinity. “Oil spills have been identified as posing a threat to the recovery of transient and resident orcas, and this proposed [Enbridge] pipeline and associated tanker traffic are expected to increase oil spill risk substantially.”

During Williams’ field studies he found that “67% of the NRKW population was found to have visited the area of Robson Bight – Michael Bigg Ecological Reserve on one ‘superpod’ day, which makes this population highly vulnerable to extinction due to stochastic, catastrophic events.” The southern resident population off southern Vancouver Island is composed of only three family groups, and it is common to have 100% of the small population travelling together in Haro Strait.  An oil spill could easily affect the entire population.

The Exxon Valdez spill in 1989 caused losses of up to 41% to two groups of orcas that have yet to recover to pre-spill numbers. As large as the Exxon Valdez, Panamax-class vessels are the type that would service Richmond. The Burnaby expansion would use the larger Suezmax tankers that carry nearly 1 million barrels of oil. Even larger VLCC (Very Large Crude Carrier) tankers – bearing up to 2 million barrels of diluted bitumen – would set sail from Enbridge’s port at Kitimat. If a significant number of whales in a threatened whale population were directly affected by another spill, losses to the population could be potentially beyond recovery.

Says Williams, “Any time you have an increase in ship traffic there is risk to dolphins and whales. In the worst-case scenario you could have a spill. Even in the best of circumstances ships make a lot of noise and whales rely on sound. Whales are at risk of ship strikes. In whale populations that are recovering their numbers from whaling, we have to be concerned about these factors. Underwater noise should definitely be one of the factors we consider when assessing the environmental impacts of industrial development applications.”

2 thoughts on “Endangered Whales and Dolphins Affected by Tankers”