China has declared war on coal and coal consumption is down as a result. But this coal war offers some good news, some not so good news for Canada, and some bad news, all at the same time.

The good news pertains to: 1) China having become an unparalleled leader and investor in the global migration to a the green economy; and 2) China’s ongoing adoption of ambitious new policies and targets to accelerate this migration at a spellbinding rate.

Unfortunately, the aforementioned good news for China also has serious implications for Canada in that not only is Canada falling further and further behind China regarding the green economy, but Trudeau and Harper, via FIPA, are set on selling Canada’s resources to China while opening the doors for China to dump its clean technologies in Canada.

The bad news is that China’s war on coal has also given rise to ambitious, but environmentally reckless, development of shale gas, wrongly perceived to be a cleaner, or less environmentally harmful, alternative to coal.

I highlighted the incredible pace of China’s initiatives to go green in an article last year, China’s Chaotic Leap Forword to a Green Economy.

As result of these measures, the above-mentioned October 2013 Common Sense Canadian article projected that coal consumption in China would peak in 2015.

But China is going green so quickly that projections about its energy future tend to prove too conservative. As a case in point, for the first time in this century, coal consumption and coal imports in China are down.

The prediction is that this trend will continue, translating into a 15% reduction in coal imports, to less than 300M metric tonnes imported by the end of 2014. Moreover, evidence that this trend is long-term comes from the Beijing government’s announcement that it will ban coal use in 6 city districts by 2020 replace it with clean energy.

Also worth noting, China’s war on coal includes the banning of sales and imports of coal containing high quantities of ash and sulfur.  The new regulation bans for sale and import coal with more than 40% ash content and 3% sulfur .  This ban would effectively eliminate low heating value coal from Indonesia and coal with arsenic from Australia.

Yet, notwithstanding the extraordinary progress China has made in such a short period, it is currently working on policies that will further accelerate its migration to a green economy.

Meanwhile, China is well-positioned to lead the world in electric vehicles (ev’s), not only now, but in the years to come. In particular:

What does China’s exceptional progress and policy leadership mean for Canada, in the context of China having become the world’s largest energy consumer and, consequently, a major influence in global energy paradigms?  In crude terms, Canada will have an enormous green economy gap to close, beginning in 2015, after the upcoming federal election.

It also means that Canada will have to shed the mindset that says our future economic wellbeing lies with increasing exports of fossil fuels – a mindset shared by both Harper and Trudeau.

FIPA, the Canada-China trade agreement recently ratified by the Harper administration, will only compound these problems.

That is, the US and the EU have responded to China’s highly-subsidized dumping of clean tech on global markets with the imposition of steep tariffs.  But FIPA stipulates that there will be no commercial barriers associated with environmental technologies. This stipulation could seriously handicap the development of Canada’s clean tech sectors.

In short, a successful Canadian plan for a migration to a green economy must take into account China.  To do otherwise would be at Canada’s peril. 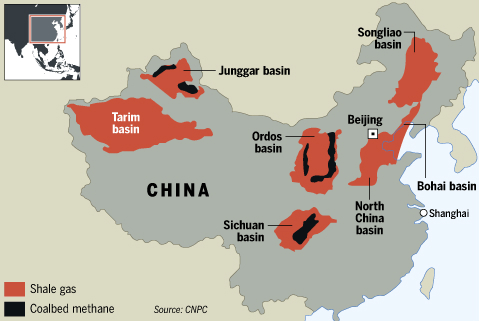 In collaboration with US partners, China is setting the stage to develop what may be the largest shale gas resources in the world, 1.7 times the potential of the US. With fewer than 200 wells drilled to date, China is projected to produce 1058 billion cubic feet of natural gas annually by 2020.  And the environmental implications identified thus far of China’s pending shale gas boom are enormous.

This in a country with dangerously low water per capita and where land twice the size of New York City turns into desert every year.

This, in a country where fracking waste water often goes untreated.

Nevertheless, all is in place to speed up the tempo of shale gas development.  Already, foreign multinationals are investing heavily in China while companies like the state-owned China National Offshore Oil Corporation (CNOOC) – the same company that bought out Nexen in Alberta – have spent $8.7B buying shares in US shale gas operations. One can suspect that this will offer Chinese firms opportunities to obtain patents on technologies; ultimately manufacture these technologies in China; and then export these very same technologies to the US at a cheaper price.

All this is going on while the US experience has taught us that that methane leaks associated from shale gas development are grossly underestimated and the potential for regulations to control these emissions are overestimated. Drilling creates fractures in surrounding rock that cement cannot completely fill, thus opening paths for the escaping of gases and liquids.  Furthermore, as the cement ages, it pulls away from the surrounding rock, reducing the tightness of the seals, thereby generating greater danger for methane leaks and water and air pollution.

Will history repeat itself?

The good and bad news have been presented in this article to demonstrate the incredible ability for China to head in opposite directions – at a tremendous speed.

On one hand, China’s amazingly rapid migration to a green economy, accompanied by a reduction coal use, suggests that China will be a major vector in the global replacement of fossil fuels with clean technologies alternatives.

On the other hand, its fracking activities, while nowhere near the scale of what is happening on China’s clean technology side of the equation, raises the weakness for which China is so famous – first go full speed ahead, wait for the problems to accumulate and then engage with incredible zeal in gestures to solve the problems created by their previous mistakes.