I recently returned from a whirlwind tour across northern BC, one of many legs of filming for a documentary and multi-media project I’ve been co-directing for the past year and a half, called Fractured Land. The people we spoke to along the way, the sights we witnessed and documented finally brought into focus the real story about energy development in BC.

It is clear to me that the proposed Enbridge Pipeline, which has been the target of so much activism and media attention of late, is merely one piece of a much bigger puzzle that promises to transform this province like nothing since the days of colonial, railroad-driven “nation building.”

Our film and the multi-media series that will accompany it through our website, FracturedLand.com, and various social media tools, is the story the industrialization of northern BC – told through the eyes of a talented, eloquent young First Nations law student named Caleb Behn.

The two sides of Caleb’s family are rooted in the epicentres of both major natural gas hydraulic fracturing (or “fracking”) plays in northeast BC – West Moberly Territory near Hudson’s Hope, under which the Montney shale gas field extends; and Echo Dene Territory around Fort Nelson, home of the Horn River shale gas field. Taken together – along with the recently discovered neighbouring Liard Basin play – form one of the world’s meccas for “unconventional” gas (read: highly experimental and dangerous).

We began our film by focusing on fracking – a relatively new method of natural gas extraction that involves burrowing deep into shale formations and blasting them with a toxic mixture of high-pressure water, chemicals and sand to crack open the shale and release the gas. But throughout our adventure, we’ve come to see that fracking doesn’t exist in isolation. Neither does the proposed Site C Dam on the Peace River in the same region, nor gas and bitumen pipelines proposed to cut across BC’s wilderness en route to Kitimat and Prince Rupert, nor myriad, massive proposed Liquified Natural Gas (LNG) plants on BC’s coast, nor the dozen or more serious coal and metals mines proposed throughout the north, nor the Alberta Tar Sands.

It is a serious mistake to put any of these projects in a silo. They are all, in fact, systemically interconnected in what my colleagues and I have come to think of – at least until a more apt description emerges – as “Canada’s Carbon Corridor”. Before this article and its second part conclude, I will briefly illustrate this interconnected web of energy projects that extend from BC’s coast to the Alberta Tar Sands – covering virtually the entire top half of the two provinces. However, the real work of fleshing out the components of this carbon corridor and how each piece relates to the next will be accomplished through a subsequent series of stories over the next two months – each exploding a different piece of the big puzzle – all cross-published through The Common Sense Canadian and the blog for Fractured Land.

Both this film project and my colleagues at The Common Sense Canadian – which has made its mission to inform the public about the energy, environmental and public policies reshaping BC and Canada – will seek to lodge this big picture view, with all its socioeconomic and cultural implications, on the agenda of the public and media in the lead-up to a pivotal provincial election next May. This is a sorely needed conversation that so far has been lost in the simplistic rhetoric championing the project of opening Western Canadian oil and gas resources to new markets in Asia and the one-track chorus of opposition to the Enbridge proposal.

If that seems unfair, allow me to state my case herewith.

We began our recent two and a half week journey in northeast BC, before traveling along the Alaska Highway through Fort Nelson, Liard Hot Springs, Watson Lake just over the Yukon Border, then down Highway 37 through the Sacred Headwaters and Tahltan First Nations country, southwest to Kitimat, east to the Morice River near Houston, and finally to Prince George to 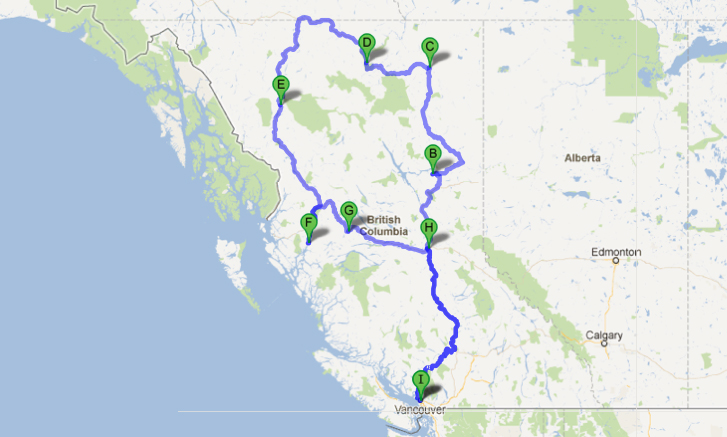 deliver a presentation to faculty and students at UNBC, before heading home to Vancouver (an approximately 5,000 km journey, all told).

Over the past several years, I’ve made seven trips to northeast BC (I’m currently here again for the “Keepers of the Water” conference in Fort Nelson) and more than that to northwest BC and its coast, but this trip – as it tied together both sides and centres of development in the province – felt like the quintessential journey through BC’s proposed economic future. Through it, we traced the interconnections of this carbon corridor and met people on both sides of the arguments around these individual projects.

If there’s one thing that has become abundantly clear to our production team, it’s that this is a conversation which defies easy polarities. The fracturing we reference in our title, taken literally from the process of fracking, serves as a metaphor for the conflict within individuals, families and communities torn between developing economic opportunities and protecting their core values  and ancestral practices on the land.

Far from shying away from this tension, we are drilling deep into it.

After driving 15 hours north from Vancouver, we began our experience at Carbon Lake, near Hudson’s Hope – at a camp once owned by my great uncle, Penn Powell, who operated it as a fly-in fishing lodge for years. Today, it is owned and operated by the Saulteau First Nation – the people of our central character Caleb’s grandmother.

Caleb comes here in the summer to hunt moose and reconnect with his land. Unfortunately, the moose are slim pickings these days – likely partly related to all the roads for logging that bisect the onetime wilderness surrounding the lake. Now, a large open pit coal mine threatens to finish the job. Carbon Lake gets its name for a reason. One can pick up large blocks of metallurgical-grade coal from the bed of nearby Carbon Creek, the site of one of a number of proposed new coal mines throughout the Peace River Coalfield.

To get to the lake, we had to drive over Williston Reservoir and WAC Bennett Dam – the first major dam in the region, which helped set the stage for the resource boom that followed. Caleb and my families have much in common beyond this camp at Carbon Lake, as we’ve learned throughout the making of our film. Another thing we share is that both our families lost our land in the flooding of Williston Reservoir in 1968. My family’s land, upon which it settled in 1914, was known as Goldbar Ranch at 20 Mile. Today, many of my uncles who remain in the region work in the gas patch. As do many of Caleb’s relatives. Such are the complexities inherent in the sort of large-scale resource decisions being made today – mostly without the broad-based knowledge and will of the public.

That said, Bennett Dam was built to provide affordable, “clean” (or so we thought at the time) electricity and new economic opportunities for all British Columbians. I believe my family understood that, even as we watched our barns and hand-crafted cabins and grand old log home burned to the ground and drowned forevermore.

Today, two fracking companies – Talisman Energy and Canbriam Energy – have a 20-year license to suck 10 million litres a day of water from that same reservoir (before it’s converted to power for British Columbians!) for their nearby fracking operations.

Moreover, Site C – which would be the third dam in the Peace Valley, stretching 80 km east from Hudson’s Hope to Fort St. John and flooding some 13,000 acres of agricultural land and a comparable amount of Boreal Forest wildlife habitat – is not being proposed to power BC’s homes and businesses. We have access to plenty of electricity for those purposes. Rather, this power will go to the myriad proposed mining operations across the north and, according to Premier Christy Clark, compressing natural gas into liquid to sell to Asia. All of these industrial operations are enormously energy dependent – to the point we would need multiple Site C Dams to even begin powering them.

From Carbon Lake, our team traveled north to Fort Nelson, where we visited with the other side of Caleb’s family. Fort Nelson is the jumping off point for the Horn River shale gas operations, which have been slowing down of late, due to the cratering price of natural gas, but contain enormous development potential and have been wildly active in recent years. The Cabin Gas Plant, North America’s largest, is just nearing completion after several years of furious construction. The adjacent Liard Basin formation was recently touted by Apache Canada as “the best reservoir in North America” for gas fracking.

Yet little of this development will occur unless a higher price can be obtained for the resource. This relatively new method of fracking has flooded the North Americ 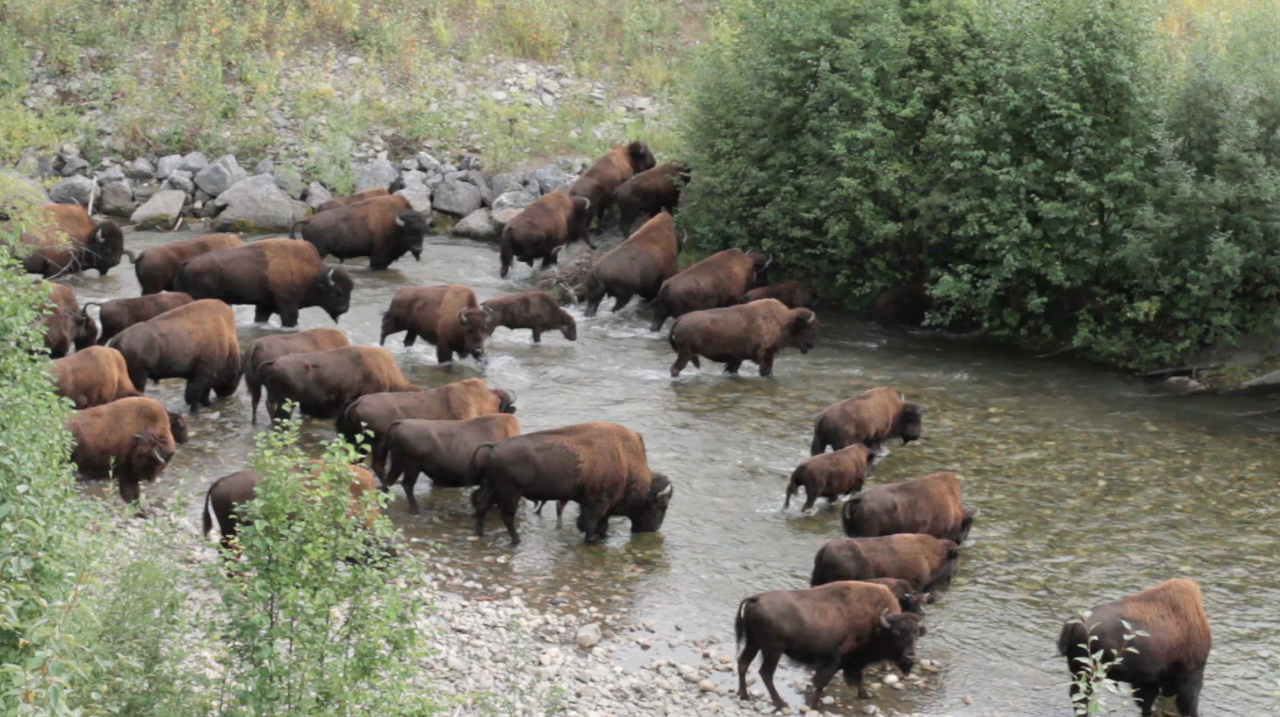 an market with supply, driving down the price for gas, which is why new markets are being sought in Asia, where gas prices are currently much higher.

Unlike the gas plays around Fort Nelson, the Montney play – in Caleb’s mother’s territory, where we began our journey – often produces what is considered as “wet gas”, meaning it contains other products, such as sulfur and condensate, both of which have considerable value on their own. Condensate is used to dilute bitumen from the Alberta Tar Sands, which is too viscous to pump through a pipeline on its own.

This is another way in which Canada’s Carbon Corridor is interconnected – both natural gas and condensate go from BC to Alberta to melt and extract bitumen and to dilute it for transport.

But the big idea, for now, is to open up new markets for northeast BC gas. If these LNG plants and the pipelines connecting northeast BC gas to northwest BC refineries proceed, you can bet Horn River activity will ramp up to new heights and the Liard Basin will be cracked wide open.

We drove near these proposed Liard operations en route to the northwest corner of the province and it is some of the most exquisite country any of us has seen. We passed through pristine valleys coursing with crystal-clear water from the Northern Rockies and by herds of majestic wild bison and various ungulate species. Our soak in the Liard Hot Springs was one the trip’s big highlights – I would highly recommend it to anyone who finds themselves in that neck of the woods.

Watch for Part 2 of this introduction to Damien Gillis’ “Canada’s Carbon Corridor” series Saturday – completing the journey across northern BC to the northwest, examining everything from mining and unconventional gas proposals in the Sacred Headwaters to the construction of the Northwest Transmission Line, the Pacific Trails gas pipeline to Kitimat and proposed LNG facilities there.

13 thoughts on “‘Canada’s Carbon Corridor’ Part 1: Connecting the Dots Across Northern BC”