The following is a press release from hereditary leaders of the Wet’suwet’en and Unist’hot’en Nations of Northwest BC: 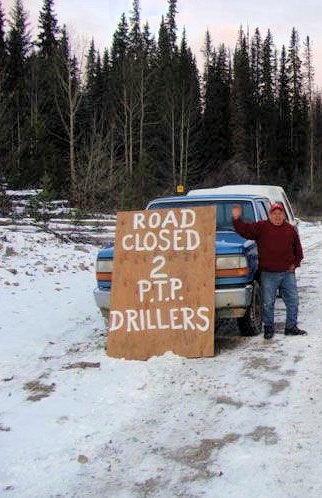 According to Wet’suwet’en hereditary chief Toghestiy, “We evicted
Pacific Trails Pipeline drillers from our territory this weekend. The
drillers in one vehicle actually cheered for our blockade and one
driller told us ‘Nobody wants to see any pipelines in the North –
especially one that operates as dirty as this one. Have a good day guys
and good luck.’”

“Pacific Trails Pipeline had moved in equipment to do directional
drilling around Gosnell River where our salmon spawn. Their exploratory
drilling and whole pipeline proposal will spell certain disaster in the
Peace River area. We have to protect our sensitive aquifers from the
destruction of pipelines – from the Alberta Tar Sands to our side of the
Rocky Mountains. You cannot make compromises with the life-sustaining
force of water” continues Toghestiy.

Kloum Khun, a Likhts’amisyu hereditary Chief who also participated in
the blockade, said: “We had a sign that said ‘No Pipelines’ and pointed
it out to the drillers. We told them to take out all their equipment
from our territory.”

The Pacific Trails Pipeline, official known as the Kitimat Summit
Lake (KSL) gas pipeline, is a proposed natural gas pipeline that will
move upto 1 million cubic feet per day of natural gas from Summit Lake
near Prince George to Kitimat using an underground 36 inch diameter
pipeline with an 18-metre right of way on each side. Much of this
natural gas is acquired through the environmentally destructive process
of hydraulic fracturing, known as fracking. After processing, the
natural gas would be shipped in supertankers from ports in Kitamat to
the international market. In February 2011, Pacific Northern Gas sold
its stake in the project to the Apache Corporation and EOG Resources
(formerly Enron).

The Pacific Trails Pipeline has a similar proposed right-of-way as
Enbridge Pipeline in Wet’suwet’en territory. According to Toghestiy:
“Enbridge is using the fact that Pacific Trails is proposing the same
right of way as Enbridge to mitigate their own ecological footprint on
our territory.” During a May 2011 interview with Fox News, Enbridge CEO
Pat Daniel discussed Enbridge’s move into the natural gas market and the
possibility of “synergies” between the Enbridge’s Gateway Project and
the Pacific Trails Pipeline.

The $5.5-billion proposed Enbridge Northern Gateway Pipeline would
carry 700,000 barrels of crude oil a day from Alberta to Kitimat. In
August 2010, representatives of Enbridge in Smithers, Michelle Perret
and Kevin Brown, received formal notice from Wet’suweten hereditary
chiefs Hagwilakw and Toghestiy that Enbridge did not have permission to
build a pipeline on their lands and was trespassing on unceded
Wet’suwet’en lands.

Freda Huson, a spokesperson for the Unist’ot’en Clan of the
Wet’suwet’en, says her community was not consulted about these proposed
pipelines: “The corporations never informed us or consulted us about
their plans. Pacific Trail Pipeline’s proposed route is through two main
salmon spawning channels which provide our staple food supply. We have
made the message clear to Enbridge and Pacific Trails and all of
industry: We cannot and will not permit any pipelines through our
territory.”

The Unist’ot’en Clan of the Wet’suwet’en participated in the First
and Second Indigenous Assembly Against Mining and Pipelines in BC. Says
Mel Bazil: “The plans of Christy Clark and the BC government to push
mining and pipeline developments into our territories will fail. We
reject the short-term interests of profit that motivates those mining
and pipeline developments that are trespassing on our unceded Indigenous
lands.