It’s getting down to the wire for the NDP-led government to announce its decision on Site C Dam. The corporate media and a some big guns for labour have been making a sales push to throw the beleaguered project a lifeline, and many fear they could succeed. That would be the biggest mistake the NDP could make. They didn’t create this monster, but they will own the consequences if they keep it alive.

There are three reasons given for carrying on with Site C: 1. We’d be throwing away $4 Billion if we killed it; 2. We’ll eventually need the power; 3. The jobs!!! All of these are bogus – and the cost of getting this wrong, for ratepayers and taxpayers (YOU), is astronomical. 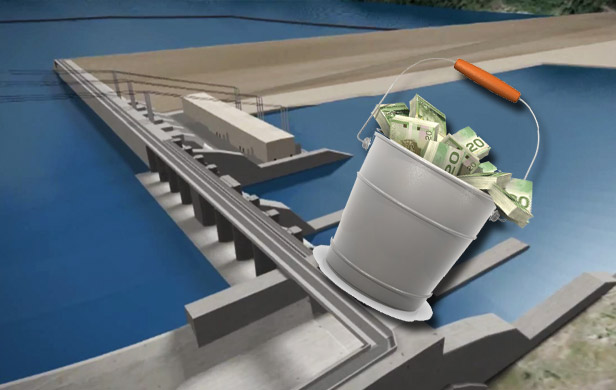 Even if you buy the overstated remediation costs for the project, even if you accept the far-fetched premise of $4 Billion lost (experts like the head of the Site C Joint Review Panel peg it closer to $3 Billion), you’d have to consider the cost of not cancelling Site C. For once, let’s be frank. Even the BC Utilities Commission, when it found the project could easily exceed $10 Billion, even go as high as $12.5 Billion (up from Hydro’s estimate of $5 Billion-6.6 Billion in 2007), wasn’t fully appreciating how bad this could get.

Just look at Newfoundland’s yet unfinished Muskrat Falls project, estimates for which have more than doubled from $6.2 Billion to $12.7 Billion. At $6.7 Billion spent, many there say it’s past the point of no return (familiar), but Site C isn’t nearly that far along, so it should be viewed differently. The net result for Newfoundlanders will be an additional $150 a month in electrical costs per homeowner…forever! Newfoundland has a smaller population to absorb its cost overruns, but we’ve got our own share of problems to compound the damage from Site C. Think of the lawsuits from First Nations whose treaty rights are being undeniably violated (while both the provincial and federal governments tout UNDRIP – i.e. they know better).

But the biggest issue is the shaky ground on which the project is being built – literally. Way back in 2009, I interviewed a longtime farmer in the region, Dick Ardill. His family has been in the Peace going back as far as mine, the Beatties, who lost their ranch to the first big dam there, WAC Bennett. Dick must have been well into his eighties when I spoke to him, with a lifetime of practical knowledge of the soil and slope stability in the valley. He told me then the biggest reason not to build the project was the unstable land. He’d seen firsthand the Attachie slide of 1973 and many others over the years. The mixture of shale, clay, and alluvial soils made for an awful place to put an earthen dam.

The 80 km section of the valley – from Hudson’s Hope to the foot of Fort St. John – where Site C was proposed was in some ways worse in this respect than where the Bennett Dam and Williston Reservoir were built (the Williston gobbled up far more land than originally contemplated, due to slumping, including my grandfather’s property above the planned reservoir). Granted, the Williston Reservoir behaves differently than would Site C, which is more a massive run-of-river project than a storage reservoir with large swings in water levels, but a 1991 report by geologist Norm Catto for the Ministry of Energy and Mines had this to say about the eastern Peace Valley, which includes the area where the dam itself is proposed:

[quote]Thus, all of the major terrain units present in the eastern Peace River region are subject to slope failure. Extreme caution should therefore be observed in any effort to exploit or utilize river valley slopes.[/quote]

This report appears to have been ignored by Hydro in evaluating Site C.

Cracks in the dam

Flash forward to the tension cracks formed around the dam site and the hundreds of millions of dollars of cost overruns already attributable to these very stability issues and you see that old Dick knew what he was talking about. And here’s the thing: There’s no bottom to this problem. Like a highly leveraged 2008 stock deal, we have no idea how deep this hole gets. Ten billion? How about fifteen? Or twenty?

If everything went perfectly according to plan (the opposite of what has happened thus far), Hydro intended to have the dam paid off by 2094! That’s now blown, so what are we talking? 2120? 2150? How many generations of your descendants will be paying for this mistake? And what’s the interest on $20 Billion amortized over a century, at much higher interest rates than we currently enjoy? (The BCUC rightly chastised BC Hydro for assuming low rates in perpetuity). In other words, what’s the real cost of this project? I could take a stab and say $60-80 Billion, and you could say that’s just a wild-eyed guess. Then I would reply, “Exactly – I’m using BC Hydro’s methods.” (For the sake of argument, though, at a rate of 5%, $20 Billion, paid off over 100 years, comes to roughly $100 Billion in principal and interest. Just sayin’).

Oh, and remember that the NDP wants to do all this while freezing Hydro rates. LOL! If they’re serious, they’ll have to raise taxes or make massive cuts to social services. They can’t have their cake and eat it too.

According to Moody’s, the single biggest threat to our Triple-A credit rating is BC Hydro-related debt. In other words, Site C – piled atop all the sweetheart private power contracts and financial blunders the crown corp committed under the Liberals’ direction – will cost us our rating. Then up goes the province’s cost of borrowing – for all our debt – and the house of cards comes tumbling down. We’re worried about (at most) $4 Billion in sunk costs, remediation and cancellation fees? Chump change!

But that’s not the worst of it. Dr. Vern Ruskin (PhD, MCom, BSc, Retired PEng [BC]) warned the BCUC of serious safety concerns, partly due to the above stability issues around the dam site. Dr. Ruskin is no less than the former Director of BC Hydro’s Planning Division, responsible for planning, designing, budgeting and contracting more than ten dams in BC, including WAC Bennett, Peace Canyon and Site C in its early stages. Among other things, Dr. Ruskin warned that changes made in 2011 to the original dam design pose increased risk of dam failure, as do these recent tension cracks and the instability they suggest.

The BCUC did not consider these concerns of Dr. Ruskin because dam safety was outside of the terms of reference for its review. But there is no reason the NDP-led government should ignore Dr. Ruskin. The enormous consequences of a dam failure – potential human injury and loss of life, widespread property damage – would make these financial concerns seem trivial by comparison.

Here’s a thought: For the last decade, our population has been growing, we’ve been building bigger houses and acquiring more gadgets, but our power consumption has remained flat. Is it so wild a concept that ten or twenty years from now the same thing could be true? Our gadgets are getting more efficient, our building codes more stringent, and we’ve seen an exodus of heavy industry, which once consumed a third of our total electricity. Wait, are we stopping raw log exports tomorrow? Did I miss the memo about a whole bunch of pulp mills reopening? Are there dozens of new mines breaking ground this year? Will BC defy global economics and magically produce an LNG industry after all the years of failure?

But let’s play this out, for sake of argument. Say in 20 years we do need more electricity. We sure as heck wouldn’t be building Site C to supply it. At the rate renewables of all stripes are dropping in cost, we’d avail ourselves of the latest, best technology – which wouldn’t be a 70-year-old idea for a mega-dam. No less than the head of the Site C Joint Review Panel, Harry Swain, the BCUC itself, and other eminent energy experts not tied to Site C, Hydro or the government, have come to the same conclusion. We won’t need the power for a very long time and if and when we do, Site C will not be the best option, either environmentally or in terms of cost.

One final point that connects to the cost issue: Since we don’t need this power, it will have to go into our grid and across our borders to customers in Washington State and Alberta. In real terms, it will cost over $110/megawatt hour (MWh) to produce, yet the going rate to sell this power has been hovering around $35/MWh for years. You do the math. Every megawatt produced carries a loss to the ratepayer.

1. BC’s big unions aren’t getting these jobs – a different, quasi-union called the Christian Labour Association of Canada, already has the lion’s share of this gig. It is also noteworthy that one of BC’s biggest unions, the BCGEU, has come out against the project, so there is a divide within labour on the issue.

3. If we’re prepared to spend large quantities of tax dollars and hydro fees simply for a make-work project, there are far better ways to employ far more British Columbians for far less money, as a new analysis from UBC’s Program on Water Governance underscores.

This jobs argument is the weakest link of the pro-Site C camp and the NDP should treat it as such.

NDP deciding its own future

The costs to ratepayers and taxpayers – along with all the other impacts on farmland, First Nations and the environment – are impacts Site C would have on British Columbians, fauna and flora. But the NDP would be wise to consider the impacts the project would have on them, politically. Had the BCUC come out with rosy outlook for the project, that would perhaps have given them some cover to continue forward. It didn’t. Now, the ball is in the current government’s court and it is not only deciding the future of Site C, but its own future.

Many in the environmental community appreciate the moves the NDP has made thus far – (partially) banning the grizzly hunt, (sort of) taking a stand against Kinder Morgan, reviewing professional reliance, reviewing Site C. Yet, I have spoken with many colleagues and seen scores of comments on social media to the effect that if the NDP proceeds with Site C, they will abandon the party.

On the flip side, if the NDP kills Site C, will it lose labour votes? Will union lobbyists Bill Tieleman or Jim Quail turn their backs on the party? Hardly. It’s unclear what the Greens will do in the short term, but this delicate, temporary arrangement will be severely strained and, in the long run, Site C will further drive a wedge through the Left, causing the NDP to lose votes in the next election. This will all be compounded by the fiscal woes that will accompany this inevitable boondoggle. Just look to Ontario and Newfoundland to see the  political fallout from poorly made decisions on large-scale energy projects.

[quote]Up until now, this has been a BC Liberal boondoggle. The cost overruns, the ballooning debt, the questionable need for such a costly project: this is the Liberals’ mistake alone. But if the government decides to continue with Site C, they will become responsible for the impacts. It will be on the shoulders of this government.[/quote]

Indeed, if this government chooses to flood the Peace Valley (again), we may look back in years, drowning in unbearable power bills and debt, and realize that 2017 was the NDP’s high watermark. Then came the flood.

13 thoughts on “Why approving Site C could sink NDP”