Can Tom Mulcair become the next prime minister of Canada?

Barely 6 months ago that question would have brought loud guffaws but the Alberta election and recent polls showing the NDP slightly ahead of its two main rivals have reduced the guffaws to nervous coughs.

I think Mulcair can do it but he needs BC to do it.

Let’s back up a bit. If one had all of the up-to-date polls from every constituency in Canada with expert analysis on each, it would still be a mug’s game to pick the winner of the next election. One can only really go on a “tummy feel” from information gained from a media which is none too bright and considerably less than politically independent.

The polls aren’t always helpful for the obvious reason that they are only snapshots of the moment the poll is taken, along with the fact that people may not always tell the truth.

Having  completed my advance excuses, let me say why I think that Greater Vancouver may decide this issue.

Often elections are simply a rehash of the previous one with the same players, similar issues, and similar outcomes. Every once in a while, though, a big change takes place and it seems to catch us all by surprise, even though a tiny bit of 20/20 hindsight tells us we should have known.

In 1945, Clement Attlee and the Labour Party threw out the great war hero, Churchill. It was considered a huge upset but when one looks at the result it’s obvious that the polls had the election much closer than the Conservatives and mainly Tory pundits did.

Moreover everyone forgot that the Tories had been in power since 1935, that there had been huge changes and a world war. There were substantial social issues to be dealt with, something the Tories weren’t noted for being enthusiastic about. 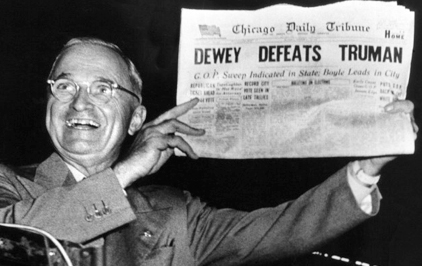 The second was 1948 in the United States. The odds-on favourite was Thomas Dewey, Governor of New York, who had run against Roosevelt in 1944 and lost. The largely Republican press tried to convince the people that Truman was a combination of incompetence and crookedness and played up Dewey, a famous crime-busting District Attorney, as a knight in shining armour. Truman went to the people by train, with speeches at every whistle stop, where a plant would holler “give ’em hell, Harry!”. When he eventually beat Dewey, he had the pleasure of holding up a headline from The Chicago Tribune saying “Dewey Defeats Truman” –  one of the more famous 20th Century photographs.

Again, with 20/20 hindsight it becomes clear that the polls were much closer than reported and that the win by Truman wasn’t nearly as much an upset as everyone thought.

In both of the above cases, there was a public mood that transcended the stated issues.

In the former, the British people, while grateful indeed to Churchill for his war efforts, saw the “boys” coming home and wondered where their jobs were, where their homes would be and how they were going to exist in a society that was still very much run by the elite. Ennui dominated and an overriding mood for some new brooms to begin sweeping.

In the second case, the people of the US suddenly saw Dewey as Alice Longworth Roosevelt saw him, “the little man on the wedding cake”; at the same time they saw Truman as their kind of guy who would stand up and fight for them. There was a mood that the status quo, dominated by the establishment, was out of date and it was a new era where the “little guy” needed an ordinary guy as champion.

I think our election in October is going to be a “mood” election more than one of issues. Canadians from coast-to-coast are fed up with Harper and the right wing who have marginalized themselves with Bill C-51.

Trudeau, has not only failed to catch on, he has shot himself in both feet over Bill C-51. In spite of the 1970 War Measures Act, the public sees the Liberals as usually strong on civil liberties and remember that Trudeau’s father brought in the Charter of Rights and Freedoms. I don’t think I’m alone in being put off by Justin Trudeau suddenly deciding to support C-51, then loftily promising to change it “when” he’s  elected.

Mulcair has been the consistent one on this file, along with Elizabeth May. The public has swung from being about 80% in favour of the bill to being very much opposed, catching Trudeau with his backside exposed.

Harper, whose unpopularity increases by the moment, has not done himself any good by ducking the debates. He looks like a “chicken” and that’s exactly what he is. There is no substantial reason for him not to face his opponents and the public doesn’t like cowardice in a leader one bit, nor should they.

Mulcair has benefited from the fact that Elizabeth May must take votes from him in order to have a substantial result. Not long ago it seemed pretty clear that Ms. May would do just that, but as happens so often in politics, things changed – suddenly she’s no longer the only option for environmentalists. The best perhaps, but not the only.

Mulcair, far from being a sure thing, will need the Greater Vancouver seats and, unless he hustles his ass on the Kinder Morgan pipeline issue, he risks abandoning that area to the Greens.

Mulcair is partway there with his criticism of the National Energy Board and a pledge to do something about it. But that’s not specific enough to gain votes.

As it sits right now – and remember, as Harold Wilson said, in politics six weeks is an eternity – Mr. Mulcair can win or lose the election based what he decides on Kinder Morgan. He’s in a good position to take a strong stand against it in light of recent studies and information. If he does that, he could join Attlee and Truman.

If, however, Mulcair continues to waffle, the people of Greater Vancouver will not support him and that could cost him the big banana.

22 thoughts on “Rafe: What Tom Mulcair must do to become Prime Minister”