It was a day of polarities to be sure. Whether it was planned or coincidence (though many First Nations will tell you there are no coincidences), December 2nd began with Taseko Mines Ltd. (TML) president and CEO Russell Hallbauer beaming with approval at the pro-mining speech given by Minister of Energy and Mines, Rich Coleman, at a mining forum luncheon. Humble pie was to be served later at the Supreme Court of B.C. as a ruling came down for an injunction against Taseko Mines, preventing them from pursuing work in the Tsilhqot’in territory.

Over 300 people gathered at the Vancouver Trade and Convention Center’s Pro Mining Forum at a cost of $100 per person, with a cult-like aura in the room with money as their god. Among the sponsors and participants were BMO, Teck, Taseko Mines Ltd, HDI, Stantec, Finning, and Accenture, with The Vancouver Sun and the Province as media partners.

As the lunch bell rang, “special” guest speaker Rich Coleman was introduced as one of the “smartest men in the world” and was welcomed by applause from costly suits that included Hallbauer, TML corporate affairs manager Brian Battison, and their legal adviser Keith Clarke – all of whom had been sitting through the injunction case with the Tsilhqot’in in the days prior.

In an ironic twist, part of the mining forum was to address “Calls to action [that] will include the need to review federal and provincial processes and showcasing world-class models of social responsibility, First Nations engagement and political stability, so advantageous in a volatile global market.” There was but one First Nations person in the entire room, that being Annita McPhee, Tribal Chair of the Tahltan Central Council, and with nothing else to go on, Coleman sought to use the Talhtan presence as an example of how other First Nations should be working with and trusting in the mining industry.?

Coleman’s speech was what might be expected from one whose greatest goal is to mine the hell out of everything – complete with high praise for Christy Clarke’s globetrotting to “sell B.C.”

In spite of promises that media would get a chance to ask questions, the floor was instead opened to the elite patrons of the event, leaving no room for questioning the Minister of Mining and Energy on matters that he was no doubt keen to avoid.

As the Province of B.C. has been aggressively bullying its way to expand mining proposals and promoting B.C. as a “place to invest”, the response by First Nations has increasingly been to stand their ground in opposition to the blatant disregard for First Nations rights and the damage that such mining projects can often bring. Front and center in such opposition has been the Tsilhqot’in Nation, who have been battling attempted invasions into their territory for gold since the mid to late?1800’s, with the Tsilhqot’in War of 1864 leaving 6 of their chiefs murdered.

For the past 20 years Taseko Mines has been trying to get approval for what has been called one of the most contested mining projects in Canada. In 2007 a ruling by Justice Vickers was made in the Tsilhqot’in vs. B.C. Aboriginal title case that the Tsilhqot’in have the right to utilize their lands as their ancestors had done before them, for food, ceremonial and spiritual practices.

In spite of the ruling and the Tsilhqot’in’s assertions that the project remains unacceptable, Taseko Mines Ltd. continues to pursue their proposed “New Prosperity Mine”.?On November 2nd, 2010, after the Canadian Government dismissed TML’s “Prosperity Project”, President and CEO Russell Hallbauer stated: “Our next steps will be discussions with both the Federal and Provincial Governments to look at options so that this mining project can move forward and meet the criteria that the Federal Government deem appropriate.'” No mention made of consulting with the Tsilhqot’in National Government (TNG).

TML was granted permits by the Province of B.C. to begin exploratory drilling, and on Nov. 12, 2011, attempted to begin work. Since the Tsilhqot’in National Government had exhausted every possible avenue to put a stop to the mining proposal, Marilyn Baptiste, Chief of the Xeni Gwet’in band, did the only thing left for her to do: she stood between the convoy of TML employees and informed them that they had no jurisdiction on traditional Tsilhqot’in territories, that their permits were not recognized by the Tsilhqot’in, and that the Province of B.C. did not have authorization to be in Tsilhqot’in territory. 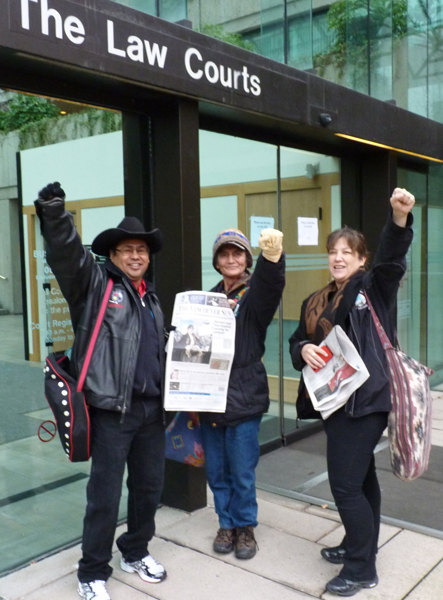 Taseko Mines Ltd., expecting direct opposition to their arrival on Tsilhqot’in land, had cameras in hand to document what they deemed to be a roadblock – which was in reality but Marilyn Baptiste, who stood in the road to advise them of their trespassing. Believing that such evidence would show them in good light, TML applied for an injunction and submitted the footage as evidence. At the same time, the Tsilhqot’in had filed for an injunction against Taseko Mines Ltd. to prevent it from trespassing on Tsilquot’in territory.

At the hearing on Nov. 29th, Chief Marilyn Baptiste, along with Grand Chief Stewart Phillip and Chief Bob Chamberlin of the Union of BC Indian Chiefs, watched the footage that Taseko’s lawyer claimed left? Chief Baptiste’s hands “unclean” in entering the court case due to her perceived unlawful behavior. Rather than incriminate her, the footage displayed the courage and conviction of Chief Baptiste as she carried out what she called her sacred duty to protect the lands as her ancestors before her had done.

Supporters of the Tsilhqot’in sat up with pride as the footage played. To the right of the courtroom TML’s president Russell Hallbauer, legal adviser Kieth Clarke and others presumably from TML sat in stark contrast, appearing to realize that their precious evidence did more to make them look the bullies that they are, bandying about a note from the Crown as though it meant more than protecting the lands upon which an entire culture depends.

Upon his ruling on Dec. 2, Justice Christopher Grauer found that Chief Baptiste’s behavior as seen on the video seemed more of a moral blockade than a physical one. The tension in room 54 of the Supreme Court was thick as no one could read how the judge would rule. Sidelong glances came from Taseko’s people, who had only a few hours earlier been dining off their mining profits. As Justice Grauer continued to read his findings, the body language of Keith Clarke and Russell Hallbauer seemed to indicate a sudden onset of indigestion.

When Justice Grauer finally noted that it was with “blood, sweat and tears” that the Tsilhqot’in have tried to get the government to understand the importance of their lands, Mr. Clarke bent over in his seat, as though knowing there’d be more to come. And come it did, as Grauer also noted that it would be the Tsilhqot’in who would suffer irreparable damage should Taseko be allowed to proceed, as well as the financial losses that the Tsilhqot’in would incur, and have incurred in the struggle to see their rights recognized – financial losses that would not be reimbursed as they would for TML.

On the grounds of actual damage, Grauer found that while TML might suffer financial costs for equipment that had been rented, the loss did not go beyond that and costs could be regained, whereas the loss of habitat would be irreparable. “Once disturbed, it is lost” he stated.

Unfortunately, Justice Gruaer did rule the Tsilhqot’in National Government must pay financial losses to Taseko Mines Ltd. for equipment rentals. Full justice would have meant the Province footing the bill for the day and a half of TML’s financial losses; yet after a week of drumming outside the Supreme Court – with simultaneous drumming and prayers in Williams Lake and elsewhere – the people of the Tsilhqot’in have much to smile about as they get a reprieve from Taseko’s threat to their lands, waters, and way of life.

One more battle down, one more victory for the Tsilhqot’in – but the war is ongoing until Aboriginal Rights to protect their lands and way of life are truly realized and the “New Prosperity Mine” proposal put to rest once and for all.

Elena Edwards in a Vancouver-based environmental and social activist who attended the full Tsilqot’in injunction hearings this past week and has also attended and documented much of the Cohen Commission into disappearing Fraser River sockeye.