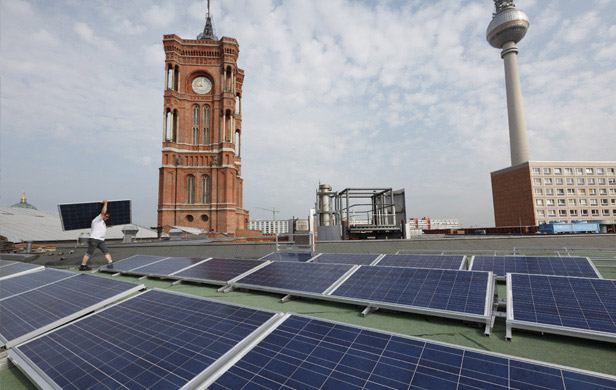 When Prime Minister Harper is challenged on his environmental record, one of his standard replies is that between economic development and sustainable development, he must give priority to the economy.  While it suits Harper’s ideological agenda to imply that economic and environmental objectives are opposing forces, the facts suggest otherwise.

Indeed, as indicated in my previous Common Sense Canadian articles, the clean technology sectors are among the world’s fastest-growing and highest job-creating sectors of our times.  Unfortunately, each year of Conservative rule represents a rapidly expanding green jobs gap between Canada and its competitors.

Among nation-specific models that disprove the Harper economic paradigm – to the effect that a natural resource-based economy is the best vehicle for prosperity – Germany is a case in point.  That is, Germany, while rising to become one of the globe’s strongest national economies, reduced its emissions by 25% below 1990 levels by 2012, thus exceeding its Kyoto Protocol commitment to reduce its emissions by 21% below 1990 levels for the 2008 to 2012 period.

This is an especially remarkable achievement in light of the economic troubles in much of Europe and in the world at-large.

Components of the German Success Story

This German success story is a result of numerous factors – one might say a holistic approach.

One of the important pillars of this success story is the 2001 German Renewable Energy Act, which introduced the concept of a Feed-in-tariff (FIT) and right to connect (RTC) formula to the world – a concept entailing: 1) the paying of above-market rates for renewable energy sources over a specified time period, combined with 2) a requirement that all sources of renewable energy production within a given utility’s region must be connected to, and given priority within, the network.

This concept makes sense economically in that all new sources of energy cost more than existing sources that were developed some time ago and may be fully paid for.  Over time, the plan calls for a reduction of FIT rates for new renewable power entries to the grid, thus providing incentives for manufactures to invest in innovation to lower costs.

Attesting to the success of the formula is the fact that the German model has since been emulated by 19 of the 27 EU states and 40 jurisdictions around the globe, including China.  Up until recently, Ontario offered such a system.

The success synergies resulting from the aforementioned FIT/RTC model and the rapid uptake of renewables also comprise attractive terms of engagement for community and individual ownership of renewable energy production.  To this effect, in 2013, 50% of the entire Germany production of renewables is owned by individuals, communities and cooperatives – with the sources ranging from home rooftop solar panels to wind power and biogas production on agricultural land.   With regard to the latter point, farmers account for 11% of total German renewable production.

In effect, the individual homeowner uptake has been so successful that a March, 2013 survey showed 60% of homeowners are considering adding rooftop solar for heating or electricity generation.

An equally significant symptom of success is the fact that in May, 2013, a €50m ($66.5M) program was introduced for power-storage systems for owners of small and medium-sized PV solar installations in order to kick-start the storage sector and take pressure off grids.  This has become necessary because grids are increasingly struggling with rising amounts of homemade renewable energy flooding the system at midday, creating an imbalance in supply and demand and having a distorting effect on the market.

As for the role of the utilities in the clean energy high-local-ownership landscape, only 13.5% of the nation’s renewable power is produced by Germany’s 4 major utilities and regional and municipal utilities.

Few countries have outdone Germany on this score, other than Denmark, where 83% of the renewable power sources are owned by individuals and communities.

Perhaps the most significant bottom line success of the German approach is the job numbers – once more demonstrating that the Harper economic paradigm is dated.  In 2011, there were 372,000 people working in the nation’s clean energy sectors and the projections are such that these numbers are expected to be in the 400,000 to 500,000 range by 2020.

A major acceleration force for the German migration to a green economy was the Fukushima meltdown in 2011, the German Energiewende (the energy transition). The program saw 8 of its oldest nuclear power plants shut down immediately after the disaster struck and includes plans for the shutting down of the remaining 9 plants by 2022.

As for filling the gaps left by the remaining planned shutdowns, a study by engineering form BEW concluded that onshore wind could replace all nuclear plants, with backup from other renewable sources.

Accordingly, among other things, the new Energiewende package comprised: 1) an increase in the Feed-in-Tariff (FIT)  for offshore wind; 2) a commitment from kfw, the state development bank, for $7.2B of investments in offshore wind development, and 3) a plan to cut electricity consumption by 10% by 2020.

To be eligible for the premium for offshore wind, originally, Energiewende projects were to be completed by 2017, but given delays in the construction of the underwater offshore TenneT cable and 30 year project lifecycles, the offshore wind industry’s lobbying efforts were rewarded by the newly re-elected Merkel-led government with a November 2013 decision to extend the completion date requirement to the end of 2019.

Germany aims for 80% emissions reduction by 2050

On longer-term Energiewende objectives, the 2050 goal is ambitious, calling for a reduction of emissions by 80% with 80% of its electricity derived from renewable sources by then. Not bad considering that only 23% of the nation’s electricity was attributable to renewables in 2012. Interim renewable electricity targets are set at 35% by 2020 and 50% by 2030.

With there being a strong renewables lobby in the country – unlike Canada, where the fossil fuel industry plays a dominant role – the German renewable industry is exercising its clout to suggest a 47% renewables target for 2020.

In this regard, the results of the September, 2013 German federal elections may in fact mean that the interim goals could become more stringent because: 1) Merkel’s Christian Democrats (CDU) are forming a coalition with the Social Democrats (SPD); and 2) the SPD had campaigned for a 40-45% target for renewable electricity sources by 2020 and 75% for 2030. The SPD campaign also included a 25% target by 2020 for co-generation, the combining of heat and power generation.

Clearly, the Energiewende will be high on the political agenda because it was a component of the Merkel election platform.

Shift away from Nuclear still not fast enough, most Germans say

Notwithstanding the impressive speed of the energy transition away from nuclear, for much of the German public, the abandoning of nuclear power is not going fast enough.  A March, 2013 poll by Infratest Dimap showed that 57% of Germans believe the shift away from nuclear is going too slowly, while only 30% feel it’s advancing too fast.

This same poll also illustrated another big difference between the energy and climate change debates in Germany versus Canada.  The poll had 39% indicating that environmental protection should be among the main criteria for political decisions.

Lastly, consistent with the Energiewende goals, Germany will be building 4,400km of new transmission lines by 2022, the year of the shutdown of all of the remaining nuclear plants.  This includes connecting offshore wind resources in the North and Baltic Seas.

Clean Energy vs. Fossil Fuels for electrical power: the economics

Contrary to appearances, the premium rate for renewables does not involve subsidies, as the costs are passed on to consumers. As one would expect, the German fossil fuel industry has complained that the surcharge to consumers for renewables gives renewables an unfair competitive advantage in the marketplace.

But a Greenpeace study showed that the exact opposite is true. Specifically, while renewables received €17B ($22.7B) in aid via the surcharge in 2012, the fossil and nuclear sectors actually represented a staggering €40B ($54B) in hidden costs.  The hidden costs are composed of direct state aid and tax breaks, as well as external damage costs associated with climate change impacts and costs resulting from nuclear accidents – all of which are borne by taxpayers. But – unlike the renewables surcharge – these costs don’t appear on electricity bills and aren’t transparent. If these hidden costs were slapped on electricity bills, consumers would be burdened with a surcharge of €0.102/kWh (14₵/kWh).

Based on these calculations, currently wind, solar and hydro are the cheapest sources of electrical supply. According to a Nov, 2013 Fraunhofer ISE study, with innovation driving down production costs, actual costs for wind are now lower than coal and gas. Solar production costs are still higher than fossil sources but the ratio is expected to favour solar by 2030.

More generally, the impact of the German energy model on the country’s electricity mix has been that of pushing of gas-fired plants out of the market, and the lowering of load factors for both coal and gas-fired plants, expected to decline to 33% by 2015.

Taking into account the popularity of the German model throughout Europe and the influence of the European cap-and-trade scheme – The European Trading System (ETS – cap and trade system) – E.ON, one of Germany’s largest utilities, indicated it may close 11 gigawatts (GW) of fossil fuel capacity across Europe by 2015.  In July 2013, EnBW, another German utility, announced plans to mothball 668 megawatts (MW) of fossil fuel production, involving 4 power facilities.

Lessons for Canada from Germany, European Cap and Trade

Germany’s achievements mean that it will be one of the most, if not the most, important contributor to achieving the EU-wide aggregated goal for a 20% reduction in GHG’s by 2020. (Note: to achieve the EU goal, member states have also taken on nation-specific targets related to national wealth for GHGs not covered by the EU ETS, such as the housing, agriculture, waste and transport sectors – sectors representing 60% of total EU emissions).

As Canadians contemplate the possibility of adopting some cap-and-trade scheme like Europe’s ETS, it is worth considering: 1) The degree to which the ETS has helped put EU nations on track for meeting their respective Kyoto targets; 2) the fact that it has become less influential in reducing carbon as the price of carbon has dropped considerably in recent years. Indeed the price of carbon declined from €13.09/tonne in 2010 to a new record low of €2.63/tonne in April 2013.

The European Commission has recommended backloading 900 carbon credits – that is temporarily removing them from the market. In July 2013, the European Parliament approved the measure, which now must be ratified by the European Energy Ministers.

For Germany’s part, the backloading details will largely be a funtion of the outcome of coalition government negotiations. The CDU wants backloading to be an integral part of a long term plan, while the SPD wants a onetime one-of solution.

Accordingly, the lesson for Canada here is that any cap and trade system that Canada sets up should include a mechanism for annual reviews of the supply and demand for emission credits to ensure no oversupply occurs that can drive down the price of credits.

As well, for select sectors which may have difficulty in complying with Canada’s cap-and-trade scheme, a loan guarantee program – with a maximum of one-loan/firm – may be in order.­­­­­­­­­­­

19 thoughts on “Germany shows a thriving green economy is possible”

Leave a Reply to Will Dubitsky Cancel reply